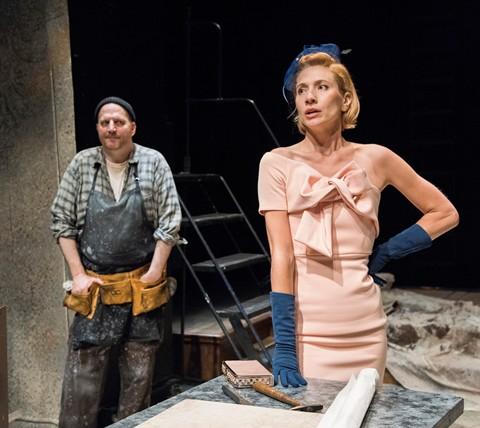 Steven Dykes and Kathleen Wise in a scene from “Pity in History” (Photo credit: Stan Barouh)

An interesting but unsatisfying historical fantasia where The English Civil War of the 1600’s is transposed to the 1980’s, sums up Pity in History by Howard Barker. It’s been given an excellent production.

Born in 1946, the British Mr. Barker has achieved a measure of prominence as a playwright. “Theatre of Catastrophe” is his self-coined description of his work that is concerned with power, human motivation, violence and sexuality.

In Pity in History, the complex events of the conflicts between Parliament, King Charles I and Oliver Cromwell are alluded to. They’re the backdrop for another examination of the British class system, art in society, Socialist politics and religion. The 65 minutes play out like a glib, pseudo-Brechtian exercise.

Set at a cathedral outside of London, we meet the likable mason Gaukroger. He is a talented craftsman who has artistic aspirations. He is carving an effigy for the tomb of deceased merchant with the assistance of his animated, young apprentice. The merchant’s widow pops up periodically to offer bromides about the importance of art, and to dicker about Gaukroger’s fee.

Marauding soldiers, philosophical officers, a wry chaplain and a loquacious, mortally wounded cook, also appear in the series of short scenes. The dialogue is the typical, poetic grandiloquence found in many historical dramas. 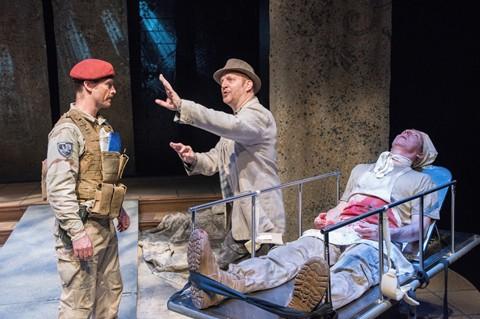 Pity in History was a teleplay commissioned by the BBC, and was broadcast on July 4, 1985. In the cast were Alan Rickman as the chaplain, Ian McDiarmid as the cook, and Anna Massey as the widow. Significantly, the era depicted was that of when it took place, reflected by period costumes and décor. Clips of it are on YouTube.

This stage adaptation is receiving its North American premiere, and is presented by Potomac Theatre Project (PTP/NYC). This theater company is celebrating its 31st anniversary and Pity in History is being performed in repertory with Tom Stoppard’s Arcadia.

This incarnation unexplainably updates the material visually with contemporary costumes. If nothing else, this adds crackle to the rather turgid script.

The powerful opening sequence begins in darkness with pulsing, dramatic music and shifts to wafting smoke, gunfire, soldiers running around and the wounded cook on a stretcher. It’s all grandly reminiscent of the stylization found in the films of Derek Jarman and Peter Greenaway.

Director Richard Romagnoli’s physical staging is precise, lively and impressive. Mr. Romagnoli’s work with the cast, all of whom employ strong British accents, is equally as accomplished. 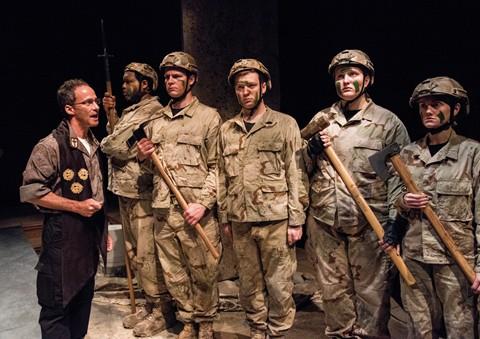 Christopher Marshall and the ensemble of soldiers in “Pity in History” (Photo credit: Stan Barouh)

With his affable everyman persona, Steven Dykes is a garrulous and commanding Gaukroger. The sleek and charming Kathleen Wise is hilarious and at times chilling with her icy, upper-class hauteur and terrific comic timing as the merchant’s widow. Jonathan Tindle’s bellowing cook is a marvelous study in comic portraiture.

Boyishly appealing Matthew Ball winningly delivers a lot of the play’s political messages as the apprentice. The soulful Jay Dunn’s stirring officer is a perfectly gruff and thoughtful portrayal. Christo Grabowski as the sergeant is suitably militaristic. Christopher Marshall is dryly amusing as the chaplain.

The striking scenic design by Mark Evancho elevates the production considerably. Columns, a small raised platform, a shallow ramp, crumbled concrete strewn about, and ropes all give the sense of the large proportions of a cathedral. Vivid projections of a cathedral and symbolic imagery are shown on the rectangular back wall from time to time.

Pity in History’s cast and technical team works wonders with this minor curio.

2 Comments on Pity in History