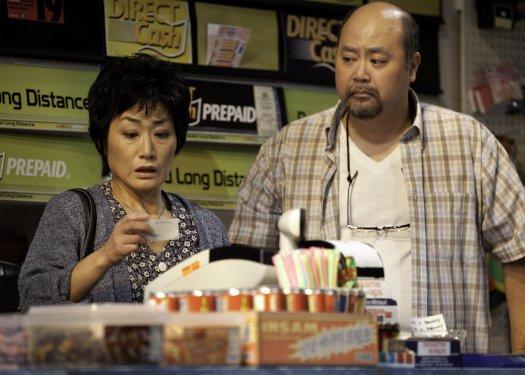 In 85 minutes, playwright Ins Choi achieves the supreme goal of The Theater, making an audience laugh while engaging their emotions.  The dialogue is flavorful and richly comical with exposition expertly integrated.  Though the setting is specific, the themes are universal.  Its Arthur Miller crossed with Norman Lear.

What is my story?  What is story of me, Mr. Kim? My whole life I doing this store.  Is the store my story?

The wily Mr. Kim ( referred to as Appa, Korean for Dad) is a 59 year-old South Korean immigrant who had been a school teacher, but upon settling in Canada seized the opportunity to own a store.  His stalwart, church-going wife Umma (Korean for Mom) assists him.  Also helping out is their 30 year-old, single daughter Janet who is an aspiring photographer. Jung is Kim and Umma’s 32 year-old, estranged son who ran away 16 years earlier after a violent confrontation with his father, and whose absence looms over the family.

The downtown Toronto neighborhood where the store is located is being redeveloped with a high priced condo complex and a Walmart in the near future.  Should Kim take an offered buyout or stay on is another complication.

With shades of Willy Loman and Archie Bunker, Paul Sun-Hyung Lee is towering as Kim.  Mr. Lee’s heavy accent is employed for comedic and tragic effects.  There’s a hilarious observational riff on the potential of customers to be shop lifters based on race, weight, age and sexuality that Lee soars with.  The reunion with his son is rendered with strategic silences and facial expressiveness that speaks volumes. 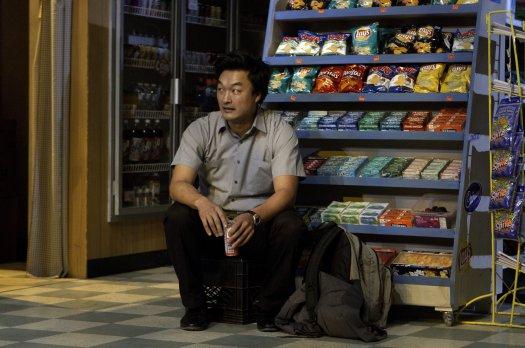 Ronnie Rowe Jr. effortlessly appears as several, crucial African-American characters.  Mr. Rowe’s vivid portrayals include a guttural Jamaican shopper, a steely real estate broker and a benevolent policeman.  The highly talented Rowe truly disappears into each of these roles and one forgets it’s the same actor.

As Janet, Rosie Simon strongly offers a portrait of the daughter of immigrants grappling with her emotions verses family ties.  The charming Ms. Simon wonderfully balances jokes and seriousness with her captivating performance.

The luminous Jean Yoon as the serene matriarch Umma, splendidly erupts with force when it’s required.  Ms. Yoon has several lovely moments when her twinkling eyes girlishly recall the past.

Mr. Choi as the author, fully understands the pathos of the son Jung, and his performance in the role is quietly shattering.  Choi’s writing and acting here are reminiscent of Biff’s agonies in Death of a Salesman. He movingly recounts the wrong turns his life has taken as measured by reuniting with childhood friends on Facebook. 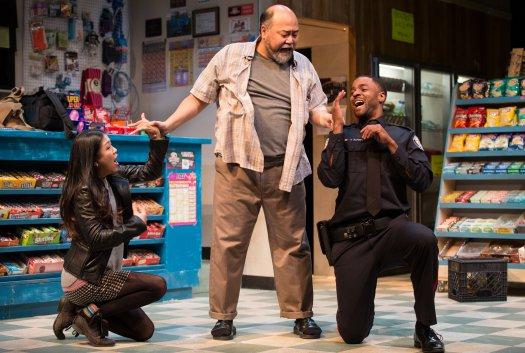 Ken MacKenzie’s fabulous scenic design looks exactly like an old convenience store.  Its rows of familiar items, racks of chips and lottery tickets hanging by the cash register instantly and recognizably connotes the realistic place and that it belongs to Kim. Mr. MacKenzie’s costume design is equally as accomplished with everyone wearing just the right clothes that suit the characters.

Kim’s Convenience premiered at the 2011 Toronto Fringe Festival where it won the Best New Play award.  In 2012, the Toronto based Soulpepper Theatre Company produced it to great acclaim, and it toured throughout Canada in 2013 and 2014.  In 2016, it was adapted into a television situation comedy.

Mr. Lee and Ms. Yoon were in the original productions and star in the television version as well. That would explain the strength of their performances as they’ve lived with these characters for so long.

Like many of the great works of dramatic literature, the power of  Kim’s Convenience lies in its polished simplicity.

This New York City premiere of Kim’s Convenience is presented by Soulpepper as part of a month long festival of their works being held at the Pershing Square Signature Center.