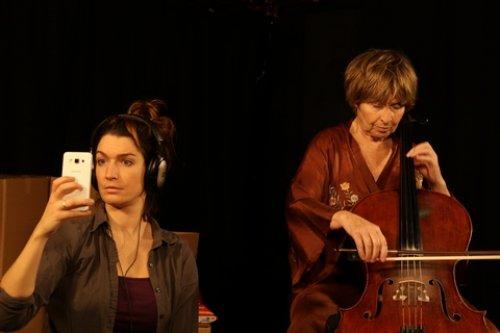 Hester Brooke (Brigit Forsyth–the central figure in Zoe Mills’ Killing Time,  directed by Antony Eden—is ready to die. At least, she thinks she is. Diagnosed with inoperable cancer, she has isolated herself in her cluttered apartment, where half-consumed glasses of red wine are scattered about, as if she’s deliberately made it possible to take a gulp from one or another of them at any given moment. She is not particularly afraid of death, but she dreads the pain and ignominy of dying. Her sentiments are not so different from those of many people facing the end of life: “I just want to know with my last breath that I lived and died on my own terms, not like some passive victim.”

A once-acclaimed professional cellist, Hester now has only two companions in life. The first is a longtime musician friend named George (Robin Herford), with whom we see her interact only via Skype. The second is her cello, which she refers to as “Freud.” Neither of these constitutes a completely satisfying confidant.

Enter a young social worker named Sara (portrayed by playwright Mills). She is a scattered and often brooding young woman, whose morbid thoughts seem increasingly to stain her psyche and steer her actions. After initial reluctance, Hester warms up to Sara, and she begins to wonder if this young woman might perhaps be a likely candidate to assist her in making a final exit. Suffice it to say, the title Killing Time has a double meaning. 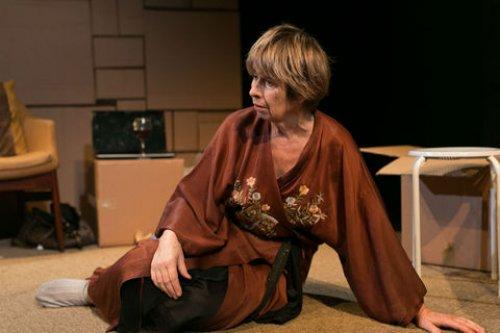 This British production is a family effort, as Forsyth and Mills are mother and daughter in real life. The play is worth seeing primarily for the sharp and uncompromising performance of Forsyth, whose blunt-talking, often-witty Hester is a joy to watch, even in her darkest moments. The production also uses Forsyth’s skills as a cellist—and as a composer—to great effect.

As an actor, Mills does a respectable job. She has a propensity for grimacing, but this may have as much to do as not with the nature of the role, as one can argue that there’s a performative element—a streak of self-dramatization—in Sara’s character.

Alongside the play’s tantalizing if borderline-ghoulish assisted-suicide thread is a more familiar (and less fresh) theme, centered on Sara’s encouragement that Hester create some kind of final artistic statement, in order to leave behind a bit of herself. (Think of the sentiment in the song “One Song Glory” from Rent.) These two thematic components don’t always mesh comfortably. This does not, however, keep the story from holding our interest. 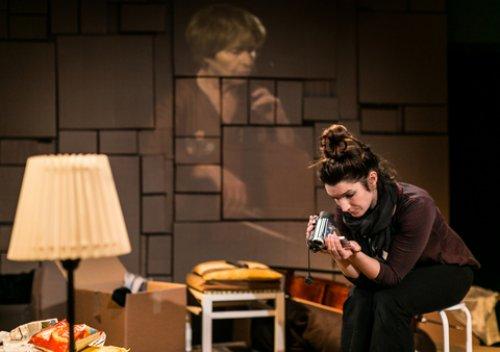 The show is presented in 59E59’s small Theater C space, so it’s almost as if we’re there in the flat with the characters. Clancy Flynn’s set, lighting and AV design, Kostis Mousikos’ video design and Alan Walsh’s cinematography and video design all help to enhance the production’s intimate nature. We feel the claustrophobia of Hester’s living space, and we sense that night and day seem to have blended into each other in the shut-in’s cramped quarters. Flynn gives us the flicker of the TV screen as Hester watches Coronation Street, and the projections show photos that Sara has collected on her cellphone. The Skype scenes are slightly awkward at moments, but that can be true in real life as well. It’s unfortunate that we’re not able to view Sara outside the door of Hester’s flat, before she enters. Instead she just steps onto the stage, seemingly in full view of Hester, while acting as though she’s still outside.

Harry Linden Johnson’s sound design is an especially important component in this production. Sometimes Hester plays her cello to a recorded orchestral soundtrack. And sometimes we hear “Freud” speak in Hester’s mind, commenting musically on the events that transpire.

Again, the main event here is Forsyth’s fine work in the leading role. Whether Hester is struggling to overcome or at least endure the physical pain of her disease, scarfing down a snack after an involuntary fast, or drunkenly and feverishly bowing her instrument on a raucous composition, you can’t take your eyes off this accomplished performer.