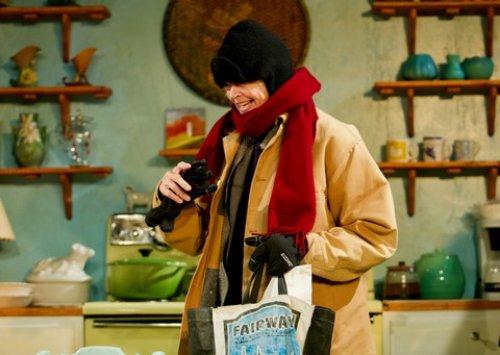 Dorothy Lyman in a scene from “In the Bleak Midwinter” (Photo credit: Sally Davis)

The theatrical styles of Anton Chekhov and Horton Foote converge in the wonderful contemporary family drama, In the Bleak Midwinter that’s written by and stars Dorothy Lyman.

Daddy loved his cows. He was so proud to be a fourth-generation dairy farmer. Thought it was some sort of sacred duty to keep that herd together. And don’t forget his grandmother keeled over dead off her milking stool, bam, right in the barn aisle. 1947. He wanted to die here, too, I guess. 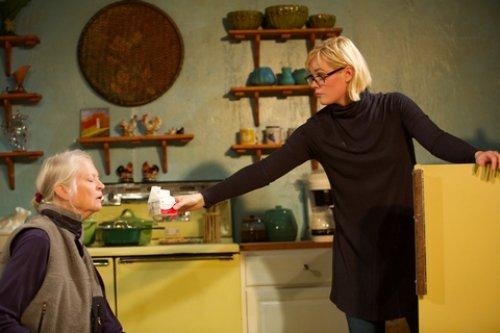 Dorothy Lyman and Abigail Hawk in a scene from “In the Bleak Midwinter” (Photo credit: Sally Davis)

We first meet the 76-year-old widowed Elizabeth Gladstone after she’s come home from the hospital having been treated for injuries sustained when a pig bit her. “I was just trying to tear that old pizza up for him, he couldn’t get a grip on it, he’d been working at it the whole time I was feeding the hens. I was just trying to do the sucker a favor. I guess he thought I was taking it away for myself. Forgot who threw it in the sty in the first place, I guess.”

She’s been running a faltering upstate New York farm with just the assistance of her young housekeeper Christie, and the two have a close relationship. Elizabeth’s sophisticated daughter Betsy and her pragmatic businessman husband Tom want her to sell the homestead and move to Florida. Their schoolteacher daughter Liz arrives with her idealistic boyfriend Jason who is getting a degree in agriculture. He crafts a plan to keep the farm going with diversified innovations. Will Elizabeth sell or stay on? 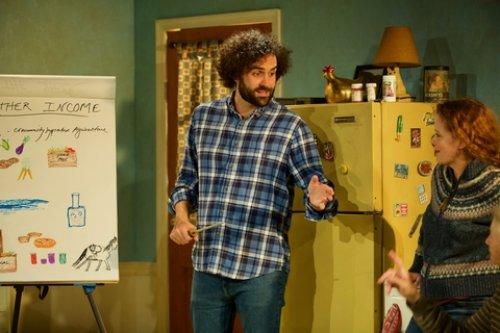 Brennan Lowery, Shannon Stowe and Dorothy Lyman in a scene from “In the Bleak Midwinter” (Photo credit: Sally Davis)

In 14 concise scenes lasting 85 minutes, Ms. Lyman quite skillfully transforms the familiar premise of a resolute aged person clashing with her relatives over giving up her independence into an engrossing play. The characters are all fully developed, background information is smoothly imparted and the dialogue is a rich blend of humor and emotion. The plot has suspense and resonance as both arguments are set forth with equal validity. Lyman has also written a great part for herself. “I got a nice leg of lamb. Not as nice as what Eileen and Ed used to raise, but now she’s in Florida and Ed’s dead. Costco’s my butcher now.”

She is perhaps best known for her Emmy Award-winning role on the soap opera All My Children and as well as a cast member on the situation comedy Mama’s Family. In In the Bleak Midwinter her performance as Elizabeth is commanding as she effortlessly exhibits her comedic and dramatic gifts. Her pleasing vocal tones, trim physique and flowing gray hair all endow the character with realism. Her engaging persona recalls the grandeur and focus of Jessica Tandy and the down-to-earth spirit of Lois Smith. 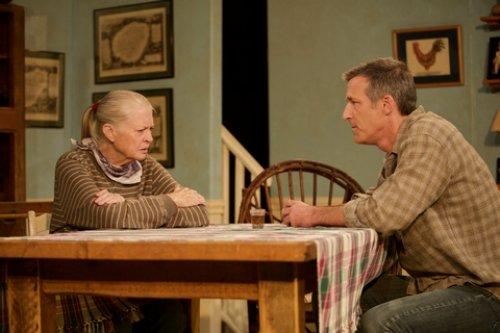 Dorothy Lyman and Tim Bohn in a scene from “In the Bleak Midwinter” (Photo credit: Sally Davis)

The blonde and charming Abigail Hawk ( Blue Bloods series regular) manages to balance Betsy’s selfishness with sincere concern that prevents her from being a total villain. The intense Tim Bohn offers a chilling yet full-fledged portrait of self-interest. Winsome and simultaneously hard-edged Shannon Stowe is quite touching as Christie. The personable Brennan Lowery is delightfully animated as he conveys Jason’s boundless optimism. Jeanne Lauren Smith’s Liz fully convinces us of the character’s fragility following a student’s suicide by her marked personality fluctuations especially after hearing a gunshot.

Besides guiding the cast’s marvelous performances, director Katie McHugh has staged the play with crisp pacing and visual liveliness. Scenic designer Johanna Pan’s cluttered rustic kitchen and dining room make for a perfect setting completed by an area off to the side close to the audience that represents the attic. 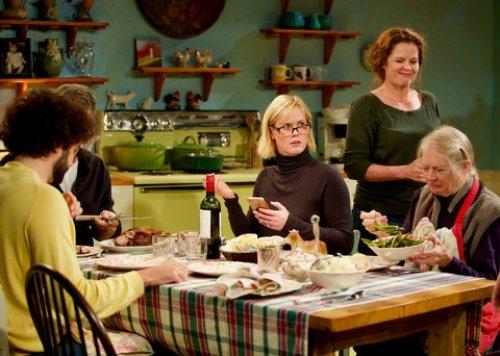 In the Bleak Midwinter is a lovely and fresh spin on perennial situations and is a welcome opportunity to experience the magic of Dorothy Lyman in person.