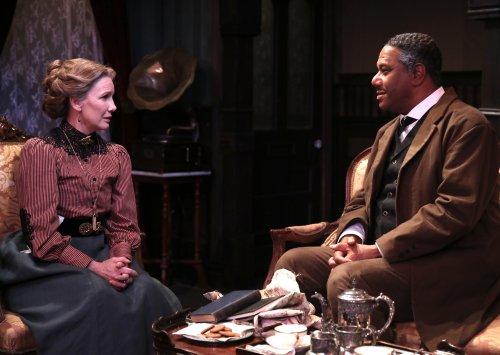 Melissa Gilbert and Mark Kenneth Smaltz in a scene from “If Only…”  (Photo credit: Carol Rosegg)

Pleasingly quaint, If Only… is playwright Thomas Klingenstein’s imaginative and moving historical drama about a reunion between two people who were involved in the Civil War.  They both knew Abraham Lincoln and their warm reminiscences about him take up a good portion of this 85-minute play.

In New York City, circa 1900, in a well-appointed parlor, we meet the patrician Astorcotts, a married couple in their late 50’s.  Henry is a stern but jovial stockbroker, and Ann is a sensitive socialite with a Bohemian past.  She once posed semi-clothed for a poor artist.  During the Civil War she was a nurse tending to wounded Union soldiers.  Childless, they’ve recently adopted a little girl from an orphanage who was traumatized by witnessing the deaths of her parents in a traffic accident and was rendered psychosomatically speechless.

The day before, Ann encountered Samuel Johnson at the memorial service for the head porter at The Astor House Hotel.  Mr. Johnson is an African-American history teacher who was President Lincoln’s valet, and has been a longtime Chicago resident.   He was a runaway slave, later enlisting into the Union army, and knew Ann when she was a nurse.  They haven’t seen each other for 36 years.

While Henry is away at a business meeting, they spend the evening catching up on their lives, recall their relationships with Lincoln, and subtly ponder their romantic feelings for each other.

Mr. Klingenstein beautifully and simply renders his fictional account with exquisite detail and emotion.  Klingenstein’s dialogue is precise and filled with sharp epigrams.  It’s all a genteel and moving exploration of the human condition.  A lovely highlight is Ann and Samuel recreating portions of the Lincoln-Douglas Debates of 1858. 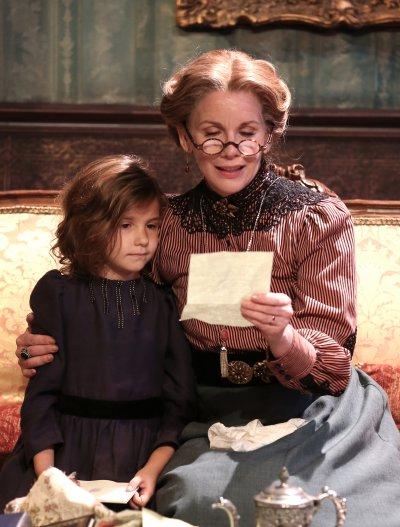 Korinne Tetlow and Melissa Gilbert in a scene from “If Only…”  (Photo credit: Carol Rosegg)

Theatergoers with a sense of history may imagine the role of Ann as a vehicle for the likes of Laurette Taylor, Katharine Cornell or Helen Hayes.  Here we get the radiant Melissa Gilbert.

The eternally girlish Ms. Gilbert veers from dithery to a affecting with her idiosyncratically melodious voice and luminous presence.  It’s an enchanting performance.  Gilbert has had a long and varied acting career, but to many she made an indelible impression as a child playing Laura on the long-running television series Little House on The Prairie.  In If Only…, she vividly demonstrates that she has matured into a very fine adult actress.

With his rich vocal tones and forceful physicality, Mark Kenneth Smaltz is commanding as Johnson. Mr. Smaltz imbues the character with dignity, strength and melancholy.  Smaltz’s characterization is dominant yet tender, particularly when expressing his long repressed feelings for Ann.

Richmond Hoxie is delightfully blustery as well as slyly playful during his brief appearance as Henry.  Longhaired, six-ear-old Korinne Tetlow charmingly and effectively portrays the silent Sophie in her short scenes.

This is essentially a two-characters-in-a-room play, and director Christopher McElroen has staged it meticulously with creative visual variance so that it compellingly reaches its wistful conclusion. 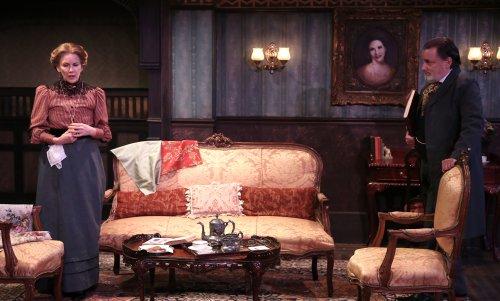 Melissa Gilbert and Richmond Hoxie in a scene from “If Only…” (Photo credit: Carol Rosegg)

William Boles’ scenic design is an arresting assortment of period furniture and objects that perfectly represent the era.  Evocative paintings and a medium-sized bust of Lincoln complete the landscape.

The characters are all authentically realized by Kimberly Manning’s textured, vintage costume design.

Becca Jeffords’ accomplished lighting design utilizes the simulated hues from the realistically beaming old-fashioned lamps throughout the parlor, with dim flourishes for the reflective portions of the play.

Ragtime tunes heard from an antique Victrola with a horn is the chief feature of Andy Evan Cohen’s restrained sound design.

Small in scope but grand in sentiment, If Only… is an engrossing work of theatrical Americana.