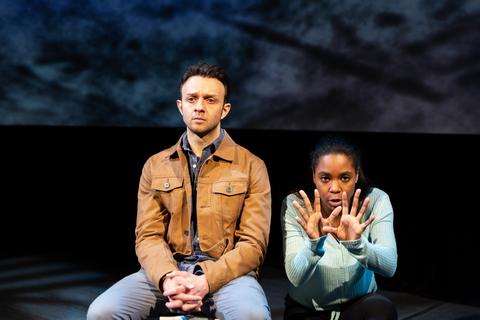 In my bedroom, I feel my chest rise and fall like an accordion.
I hear the garbage truck down the street, New York City’s public alarm clock.
And I feel myself snoring through the thick mucus of this fucking contagion that grips both me and Orion.

Culturally relevant, emotionally resonant but languidly conceived, Entangled dramatizes the issue of gun violence in the contemporary United States. Playwrights Gabriel Jason Dean and Charly Evon Simpson’s structure is that of alternating monologues for its two characters. The play’s chief flaw is their overly literate dialogue that would be suitable for a graduate writing seminar or one of Edward Albee’s more rococo works.  “Inside, the funeral home smells like potpourri and middle-class despair.”

The preponderance of this self-conscious style is instantly wearying and makes the first hour an endurance test, undercutting the inherent poignancy.  The last 30 minutes are quite powerful with its climactic revelations and simple descriptions. These somewhat redeem the play which then shifts to a starker more forceful tone, becoming more emotionally involving.

Mr. Dean and Ms. Simpson’s fictional scenario follows the aftermath of a mass shooting at New York City’s Hayden Planetarium where 47 people were killed. The gay 26-year-old Pennsylvanian Bradley lives in Brooklyn with his boyfriend. His younger brother “Little” was the shooter and Bradley gradually mentally unravels from misplaced guilt as he is haunted by the event and dreams of his brother. He gets caught up in contacting and trying to make amends to the families of the deceased. 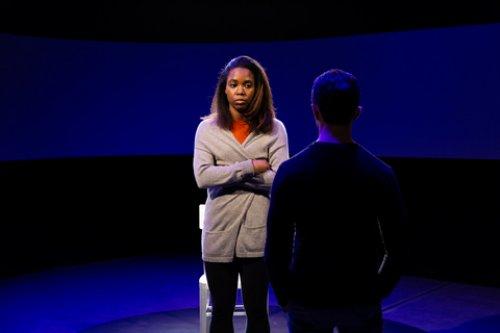 Greta is an African-American woman whose young daughter Astrid died in the attack. We learn of her grief, rage and the toll it all takes on her relationship. The searing theme of the media glorifying perpetrators while the victims are quickly forgotten is expressed through her statements.

James Kautz and Naomi Lorrain offer strong and detailed performances as Bradley and Greta. Each exhibits intensity, humor and charm. They both admirably grapple with the heavy writing, acquitting themselves well while reciting numerous lengthy speeches.

Director Kate Moore Heaney brings as much momentum as possible to such a laborious piece through crisp physical staging and spacy technical elements. Ms. Moore has the two actors alternately in constant motion, strategically stationary, and entering and exiting from different areas. 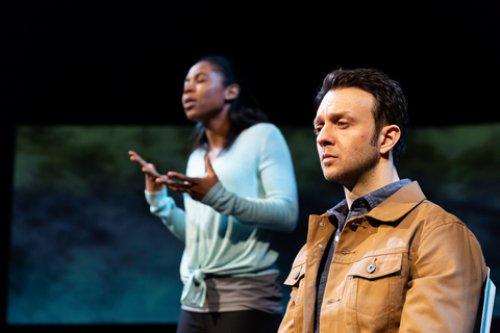 Scenic designer Andrew Diaz has created an arresting visual environment from only a small round platform and a chair.  Wrapping around the walls of the circular playing area are screens on which projection designer Kate Freer’s dreamy celestial images are shown as well as television news clips. The total effect is that of being in the characters’ minds and also at the planetarium.

Christina Watanabe’s lighting design and Matt Otto’s sound design each complete the sense of being in a cerebral dimension with their appropriately eerie contributions. Costume designer Angela Harner’s well-selected everyday garments realistically realize the characters with the cast cleverly reappearing wearing different tops. These quick changes subtly connote the passage of time as the play spans close to a year.

Amidst its incessant verbosity Entangled contains effective segments particularly as it reaches its wrenching conclusion.

The Jeffrey and Paula Gural Theatre at the A.R.T./New York Theatres,