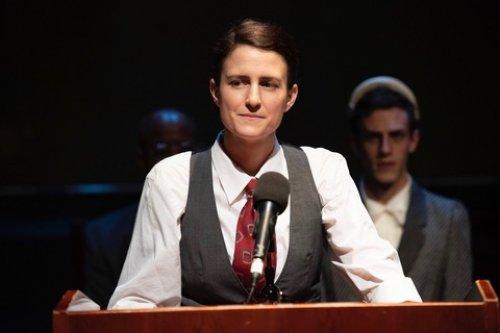 Vice President Henry A. Wallace’s stirring oration nominating Franklin Delano Roosevelt for a fourth term at the 1944 Democratic Convention in Chicago is part of the strong opening of playwright Danny Rocco’s sprawling historical work, Convention. Wallace addressing the convention after he has been dropped from the ticket is the wistful coda. The magnetic Claire Mikelle Anderson delivers a commandingly fiery performance as Wallace that does justice to this American political giant. This commendable piece’s tone though is shaky and is more Hamilton than The American Experience.

Wallace was Franklin Delano Roosevelt’s Secretary of Agriculture from 1933 to 1940 and was a champion of The New Deal. He was elevated to the vice presidency for the election of 1940. By the time of the 1944 election his pro-Russia stance, radical for the times social policies and antagonism toward major corporations made him a divisive figure. With FDR’s tacit approval there was a movement to replace him with the middle-of-the-road Missouri Senator Harry S. Truman. Many party insiders were concerned by FDR’s obvious ill health and worried that Wallace would succeed him as president.

Peter Stone’s monumental book for the 1969 musical 1776 is the gold standard for dramatizing American history. Mr. Stone vividly created suspense as to whether the Continental Congress would vote for independence when we know that they did. As Convention winds down there is similar spellbinding tension as the state delegations vote for vice presidential candidates when we know that Wallace lost.

Regrettably these achievements are marred by hollow tangents, diluting the play’s potential power. Having come up with a such a novel premise, Rocco is carried away by a concern with form rather than straightforwardness. Much of it plays out like subpar Robert Altman with empty cross talk, heavy- handed overlapping dialogue and strained comedy. The whimsical device of a hotdog vendor caught up in the action is overused and becomes a drag despite Brandt Adams’ gruff charm and masterful comic timing.

The two acts with an intermission lasting one hour and 50 minutes are slack with the momentum drained by shtick such as characters repeating the same statements several times for the only discernable purpose of being funny. It all distracts from the compelling drama as to who the vice presidential candidate will be.

I encourage you to not cast this with all white middle-aged men. When this play was (first) produced, we cast Henry Wallace as a woman, Bess Truman as a man, and Harry Truman as an African American man. Please make an effort to be inclusive.

Rocco’s detailed stage directions have been precisely followed in this production. Instead of “white middle-aged men” the company is comprised of youthful multi-racial performers with women playing many of the men’s roles. Their uniformly exaggerated characterizations vary in effectiveness. 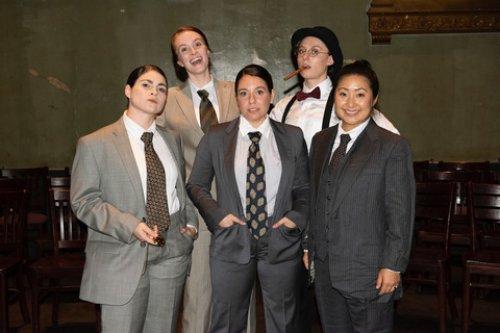 Making a great impression with her screwball comedy delivery is Lizzie Stewart as ardent Wallace supporter California Democratic congresswoman Helen Gahagan Douglas. Ms. Stewart is poignantly shattering as she accepts his defeat. The African-American Charles Everett is a dynamically wily Truman. The thin and fluttery Daniel John Serpati in women’s clothes is essentially a sight gag compared to the real Bess Truman who was large and dour.

Director Shannon Fillion’s physical staging is impressive as the teeming company is inventively moved around on upper levels as well to optimum visual effect. For better or worse, Ms. Fillion is faithful to Rocco’s vision.

The creative scenic design by Taylor Friel wonderfully accessorizes the crumbling bleacher-style auditorium of the Irondale art space with red, white and blue banners, state delegation signs on sticks placed throughout. The central playing area has a dais with a microphone and onstage audience seating. Erin Fiel’s eclectic lighting design is often shadowy and muted with bursts of brightness conveying the past with vintage grandeur. Sound designer Megumi Katayama perfectly realizes the numerous snippets of 1940’s popular songs that are seamlessly interwoven throughout as well as evocative simulated roars from the crowded assembly. Boxy oversized suits and showy dowdy ensembles are the hallmarks of Jen Raskopf’s witty costume design.

Convention admirably though erratically dramatizes a fascinating chapter in the history of the United States.

Running time:  one hour and 50 minutes with one intermission