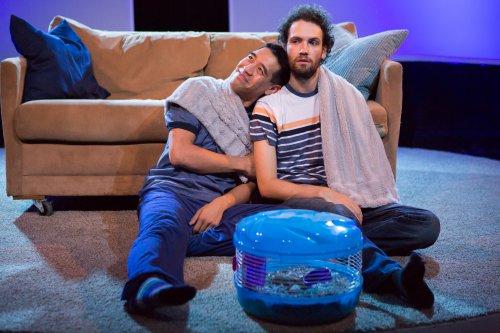 Uneven but likable, playwright Dan Giles’ Breeders charts the complicated relationship of two gay men awaiting a baby from a surrogate.  This situation is dramatic enough, but Mr. Giles has the action alternate with the activities of a male and a pregnant female hamster played by actors.

This parallel device may be some sort of an allegorical commentary, but the two narrative universes don’t really cohere.  Still, the play has its entertaining and insightful aspects.

Mikey and Dean are both 32 years old and have been together since they were 19.  There have been a few “breaks” along the way, where they saw others, and the relationship is open with boundaries. The volatile Dean has quit his unmentioned job to become a stay at home parent.  The more solid Mikey has longed to be a parent and has an unspecified “big job” that allows for this expensive domestic setup.

As the arrival of their baby approaches, there is soul searching, recriminations and hooking up with others.

Dean’s younger sister has gone away and left in the couple’s care, her pet hamsters, Tyson and Jason, that are in a plastic cage.  We get cutely anthropological scenes with this couple that grows more complex as Tyson gives birth to her litter. 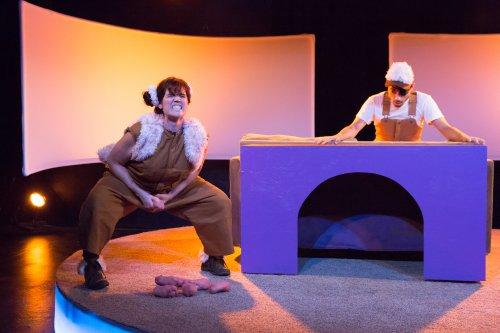 There are plentiful comic one-liners and also sharp observations in Mr. Giles’ well-crafted dialogue.  Giles perfectly renders all four characters with personality details and traits.  The tensions, concerns and sensibilities of the long-term gay couple all ring true, but interspersing these with the mildly entertaining hamster story feels like a strategic theatrical device that undercuts the main plot to no great effect.

Alton Alburo offers a solid portrait of a gay man striving for a conventional way of life as Mikey. 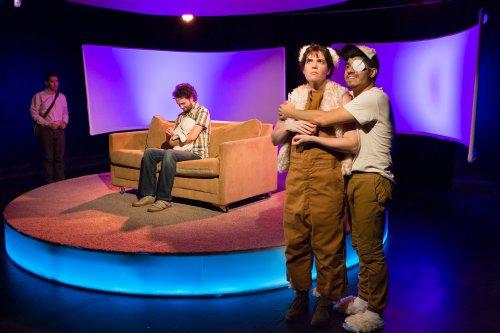 Director Jaki Bradley’s vigorous staging swiftly and creatively depicts the milieus of the humans and the hamsters with visual flair.

The stage has a round platform on which are a couch, some furniture and the blue plastic hamster cage.  It’s all surrounded by curved white panels that add a compelling sense of atmosphere.  With inspired simplicity, Brian Dudkiewicz’s scenic design is major achievement of the production.

Lighting designer Oona Curley and sound designer Ben Vigus provide an assortment of pulsing effects that transition from the two landscapes with clarity and precision.

Edward Albee’s 1975 Pulitzer Prize-winning play Seascape contrasted an older couple’s marriage with that of a lizard couple, played by actors, with mixed critical results. Similarly, Breeders doesn’t come off due to its animalistic tangents.