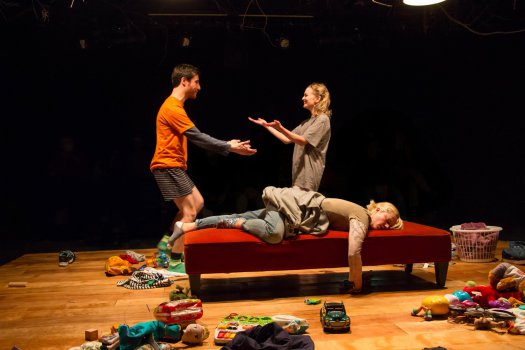 In DannyKrisDonnaVeronica, playwright Lawrence Dial bitingly delves into the lives of two Brooklyn couples each with two small children.  Through his precise, often humorous and realistic dialogue, Mr. Dial has his very well-drawn characters who all in their mid 30’s eloquently express their conflicted feelings and despair.  Short on actual plot, the play is rich in incident and is a wistful character study.

Singer, songwriter and guitarist Danny released a well-regarded recording years earlier that can still be bought on iTunes.   While working as a bartender, he met and later married the corporate careerist Donna.  After their two children were born, he put aside his ambitions to raise them while she continues to climb the ladder.

Kris is a former nurse married to Veronica, who runs the floundering pizzeria that she inherited from her father.  After the difficult birth of their second child that caused a major depression, Kris left her profession to raise the couple’s children.

During play dates at a park, Kris and Danny form a strong bond and eventually the two couples have dinner together and that turns into a bittersweet gathering.

With numerous classical credits among them, the seasoned but youthful cast uniformly brings a heightened naturalism to their strong performances. 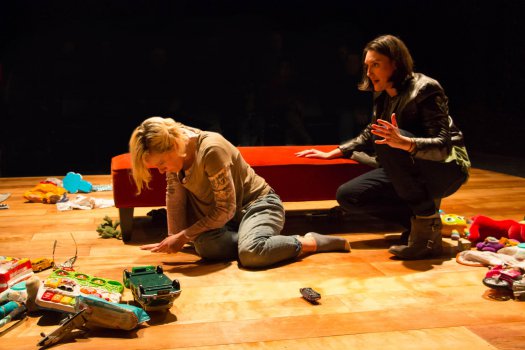 As Kris, Suzy Jane Hunt vividly conveys the character’s complexity and turmoil with her powerful performance.  Ms. Hunt’s warmth and clipped delivery vibrantly capture the lightheartedness and melancholy of the character.

The highly appealing Rachel Mewbron doesn’t resort to caricature in her winning portrayal of the pragmatic Donna.  Ms. Mewbron humanizes what could have been harsh clichés with her charming presence and emotional range.

Employing slight Italo-American inflections, Liz Wisan is at times very funny as well as very moving with her earthy performance as Veronica.  Ms. Wisan’s reaction to, and the subsequent aftermath of cutting her foot on a piece glass becomes a subtly bravura demonstration of her considerable talent.

Director Jeff Wise masterfully coordinates the cast, as they appear all together while conversing in their different residences.  There is a great deal of compelling imagery. The audience sits on two sides of the arena style playing area and the staging is always balanced, never shortchanging viewers in all locations.  Numerous scene transitions are achieved swiftly and comprehensively.  The ensemble all interacts with each other with searing results.  Mr. Wise has faithfully and artistically realized the author’s intentions.

“Two apartments existing in separate spaces with in the same space” is how Dial describes the setting.  This production beautifully renders this crucial stage direction on every level.

A mass of tree branches, two lamps and several lanterns are hanging from the ceiling over the hard wood floor of the square stage.  It’s set with a long rectangular red velvet sofa, two wooden benches on the sidewalls and the floor is strewn with toys.  Scenic designer Brittany Vasta has created a brilliant theatrical landscape that instantly conveys the various settings and the sense of being in Brooklyn. The apartments, the park and pizzeria are cleverly visualized without any set changes. 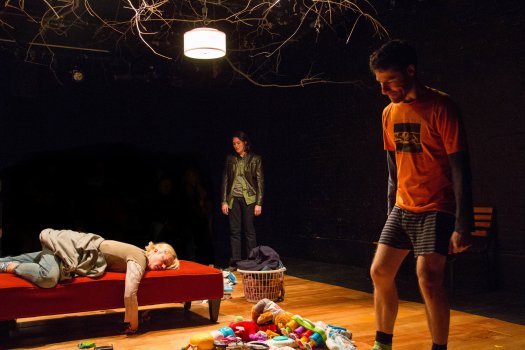 Lighting designer Drew Florida frequently and steadily alters the hues with artful brightness and dimness adding a bold visual quality that suits the moods and tones of the scenes.

A repeated riff from Beck’s music, and Eurythmics’ “Sweet Dreams (Are Made Of This)” accompany the scene to scene shifts.  These aural delights are features of Justin Propper’s expert sound design that also blends in sparing effects and city sounds.

“My life has been obliterated,” says Danny several times.  During a marital confrontation, Donna taunts him with that phrase.

Many playwrights aspire to emulate Anton Chekhov’s profound blend of introspection and frustration, often with mixed results.  In DANNYKRISDONNAVERONICA, Dial comes as close as possible to attaining those qualities and they are exhibited in this excellent production.