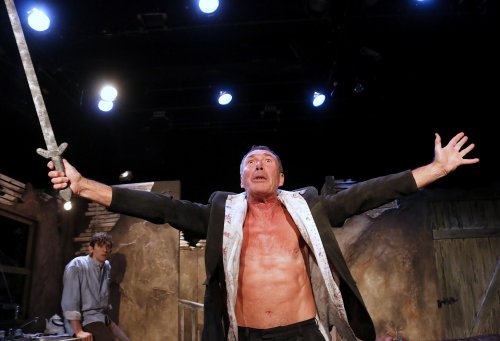 An Irishman released from prison after 33 years is the fulcrum of playwright Honor Molloy’s spellbinding memory play Crackskull Row.  The title refers to the Dublin street where it is set. Alternating between black comedy and emotional intensity, this wildly dysfunctional family drama is cleverly written, hypnotically presented and sensationally performed.

It is 1999, and in the play’s eerie prologue the freed man cryptically sets the story in motion.  Then we meet the disheveled and disaffected elderly woman Masher Moorigan who’s living in squalor.  Her New Age-y daughter Dolly periodically checks in on her. She frets about Masher’s chi, brings self-help books that are used to prop up furniture and they bicker.  There’s no heat, hot water or electricity, as Masher owes £38,000 to various authorities.  Her husband Basher was a fiddle player in a band and ran off long ago.  His empty fiddle case remains on a shelf.

The play flashbacks to 1966, and we see the young Masher who works as a go-go dancer.  She lives with her 16 year-old son Rasher and their relationship is complex due to her abusive marriage.  The action shifts from the two time periods and builds to a shattering conclusion as the dark secrets of what is now a psychological thriller are revealed.

Ms. Molloy has created a highly imaginative and tightly structured work that veers from fantasy to reality with startling and fascinating twists and turns.  The grim Irish locale and characters are rendered with blistering authenticity.  “No one around here was ever in love.” 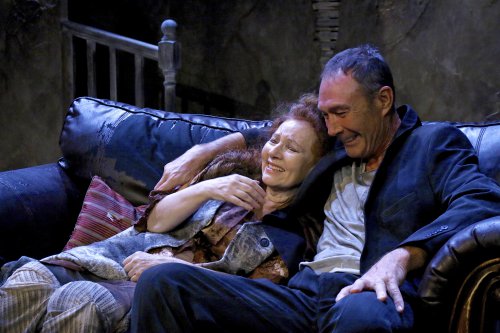 Director Kira Simring’s superior staging theatrically presents the play’s complicated situations with clarity and surrealistic flourishes.  Characters often enter and exit through unlikely places such as through the audience or from a side door.  Though the play lasts only 75 minutes, Ms. Simring’s physical realization of it makes it seem lengthier with the depth she has brought to it.  Her results with the cast, some of who play dual roles is superb.

Not only does Gina Costigan winningly play the daffy Dolly, she also plays Masher in 1966.  Ms. Costigan offers a fierce portrait of a battered yet resourceful woman of that era.  Scantily clad at times and trying on the pairs of gaudy shoes that she’s addicted to, Costigan is totally convincing as a sexually predatory, for-profit go-go dancer.  Her alluring sensuality combined with her maternal sensibilities all makes her characterization outstanding.

Going beyond the stock screeching harridan, Terry Donnelly as Masher gives a harrowing performance of great range.  Ms. Donnelly is effortlessly girlish, aged, wily and naïve simultaneously.  A grand highlight of her achievements and of the play’s is a flirtatious Joe Orton-type scene between her and “The Hot Water Boy.” He’s a conniving representative from the power authority wearing a dirty cap, dirty gray clothes, and carrying a clipboard.

Drunkenly bellowing and waving a sword around, Colin Lane magnetically plays Basher as an everyman Irish rogue.  In addition to this temperamentally charming characterization, Mr. Lane appears as the brooding enigmatic figure that lurks throughout the production. 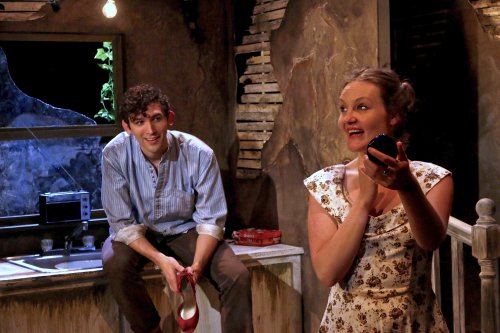 A “shitheap” is how the house is described and scenic designer Daniel Geggatt has constructed a fabulously filthy and crumbling dwelling.  There are rags all over the place, exposed grimy brick walls, rotting wood, chipped plaster, broken windows, a decrepit staircase, and a disgusting kitchen where a decaying bag of potatoes is discovered. The worn-out couch is a treasure chest of forgotten candy bars.  The floors are strewn with trash including empty snack bags.  This hellish setting perfectly complements the horrific universe being dramatized.

The ominous musical score by M. Florian Staab is heavy on primitive drum beating.  Mr. Staab’s expert sound design very effectively blends that and the other effects for the intended etherealness.

Masher’s grotesque Miss Havisham-style getup is the crowning glory of Sienna Zoë Allen’s costume design.   The other characters are all depicted in artfully realistic attire.