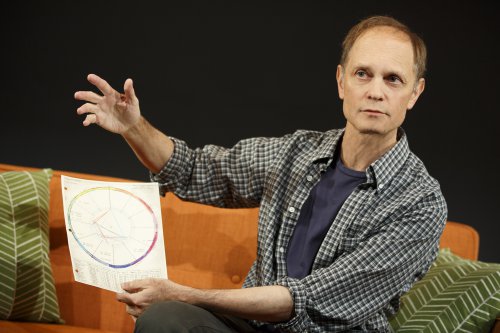 In A Life, Mr. Pierce is Nate Martin, a 54 year-old, single gay man originally from the Midwest, living in Manhattan, who works as a proofreader for an advertising agency.   A detailed list of his numerous ex-boyfriends, his adoration of astrology and descriptions of his group therapy sessions all add up to a self-portrait of a quintessential neurotic New Yorker.  The hermetic environment is occasionally shattered by the sounds of the city from outside Nate’s comfortable apartment.

Pierce coolly addresses the audience while delivering this mundane litany.  His superb comic timing, long evident on the television situation comedy Frasier, is on glorious display here.  That quality combined with his dramatic depth and soothingly funny delivery makes this opening sequence mesmerizing.

There is also the suspenseful feeling of where is this all going?  Eventually we do find out and it’s stunning and fantastical.

The action shifts to Central Park where we meet Nate’s best friend Curtis.  He is a younger gay man and the two have a jovial and intense conversation as best friends do.

Mr. Bock presents an expertly conceived take on the milieu of contemporary life and upends it with breathtaking and emotionally charged revelations.  Bock’s dialogue is authentically straightforward and his characters all have a rich sense of reality.   To go from the commonplace to the profound is a great achievement.  It’s like Neil Simon crossed with Samuel Beckett.

Director Anne Kauffman’s staging perfectly renders the ordinary aspects that are depicted with measured pacing, real-life movements and sparkling performances from the cast.  Ms. Kauffman’s realization of the play’s turning point is a coup-de-theatre.  Static repetitiveness on stage may have never before been so compelling. 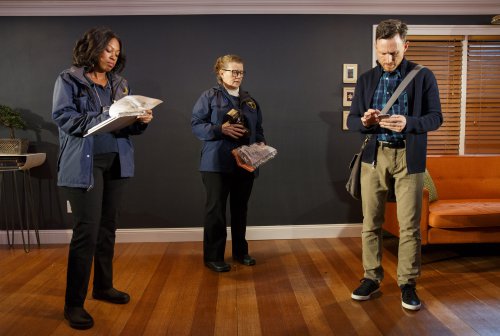 Bearded and often soft-spoken, Brad Heberlee as Curtis is delightfully animated and low-key when needed to be.  Mr. Heberlee wonderfully conveys the essence of a best friend and his chemistry with Pierce is marvelous.

In other roles, Marinda Anderson, Nedra McClyde and Lynne McCollough are each vividly exceptional.  To go further in describing their characters would ruin the surprises of the play.

Scenic designer Laura Jellinek’s spacious sets are eerily natural and the transitions from one to another are amazing.  Adding to the production’s ethereal aspects is Matt Frey’s crisp and haunting lighting design.

With brooding stillness and every day comedy, A Life is aptly titled and is a powerful experience.