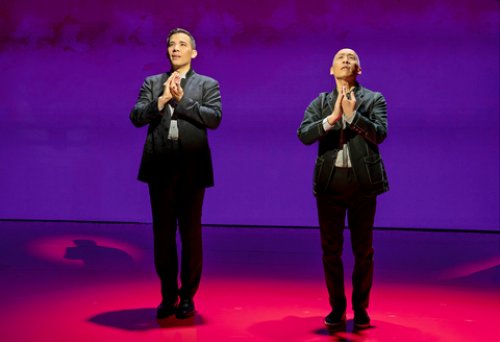 Conrad Ricamora and Francis Jue in a scene from the Public Theater’s production of the new musical “Soft Power” by David Henry Hwang and Jeanine Tesori (Photo credit: Joan Marcus)

Hillary Clinton wearing a glittery red pantsuit leading a Gene Kelly/Stanley Donen-style production number set in a Busby Berkeleyesque recreation of a McDonald’s with giant sparkling French fries is a highlight of the insipid and disjointed musical fantasia, Soft Power. It’s just one of its many lame sequences including a The Music Man-type explanation of the U.S. electoral system led by a singing and dancing judge. We’re in for two hours of painfully unfunny self-indulgence. Holden Caulfield from The Catcher in the Rye pops up too.

M. Butterfly Tony-award winning playwright David Henry Hwang survived a seemingly random, almost fatal stabbing to his neck in November 2016 near his Brooklyn home. This crime which remains unsolved is the inspiration for this exercise that he conceived and wrote. Instead of a profound treatment of such a traumatic event, we get a jokey, shallow and pompous offering. 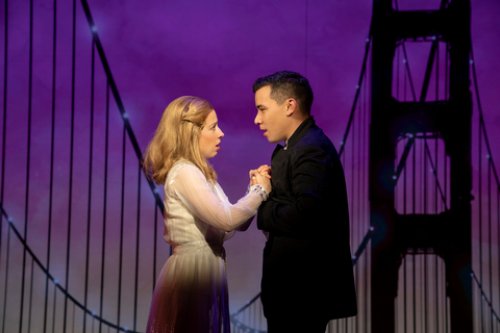 Mr. Hwang depicts himself as a character and dramatizes the assault. In the show, Hwang had been working on the book of a musical adaptation of popular Chinese film for a Chinese entertainment company in New York City. Following the violent incident, we’re then transported to his fantasyland. The crassness of show business, the 2016 U.S. presidential election, U.S.-China relations, American predilection for guns, and the Trump administration are tediously satirized on a grand scale.

Rodgers and Hammerstein, Bernstein /Comden & Green, and Meredith Willson with dashes of Sondheim are channeled in the jaunty though witless pastiche of a score crafted by Hwang and composer Jeanine Tesori. 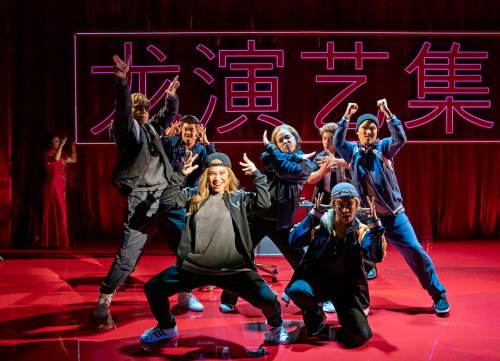 The winning Alyse Alan Louis delivers a powerhouse musical comedy performance as Hillary Clinton. Francis Jue is charming and animated as Hwang. The leading role of the Chinese businessman usually played by Conrad Ricamora was portrayed at the performance under review by the sensational Billy Bustamante. The mostly Asian, large and talented ensemble vigorously attack their myriad of superficial roles with distinctive flair.

Its high caliber production aside, Soft Power is a wan egocentric therapeutic exercise of little consequence.