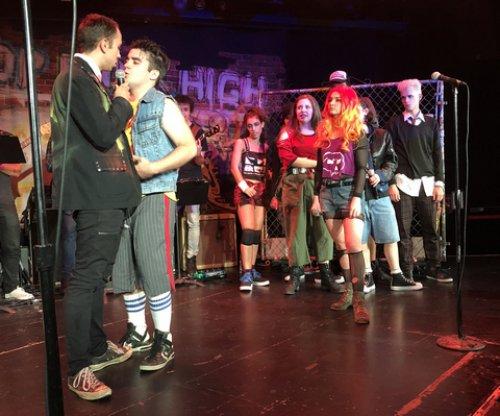 Avril Lavigne was murdered and replaced with a robot is a major plot device of the goofy rock musical Pop Punk High that grows convoluted after its mildly diverting first half. An eight-foot long penis then becomes a focal point. Lavigne’s spirit is in a can of Axe Body Spray and like a genie she grants three wishes to the hero. 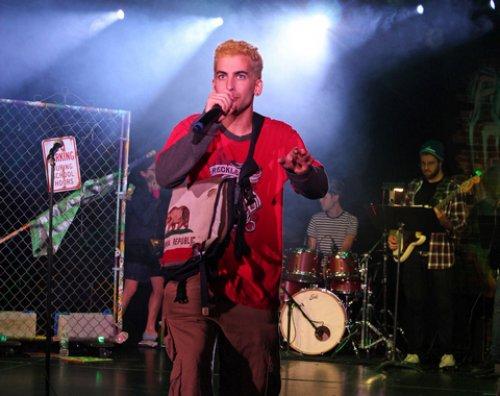 It’s 2003 at Pop Punk High and we follow several seniors. Our hero is the sullen platinum blonde Derek who is in love with the tempestuous Amanda Bunkface but she is affixed to the school’s brash king, Skeet. The officious principal, Derek’s uptight parents and a cadre of students weave in and out of the machinations. There’s a battle of the bands, detentions, demerits, a valedictorian and a skate-boarding challenge.

The rest of the cast injects their loony characterizations with strong vocal and acting talent. Kelly Krauter is a delightfully credible Avril Lavigne. Patrick Sweeney’s Skeet is mirthfully obnoxious. Playing Amanda Bunkface is the appealing Jess Kaliban. With his sly charm, Jacob Grover is a wonderfully deadpan principal. Personable Amanda Centeno’s petulance as Derek’s best friend Tib is quite effective.

Director Felicia Lobo injects momentum with her energetic staging that intersperses rock band moves and kinetic placement of the cast all over the space, as well as having them roam through the audience.

Pop Punk High is performed at the (le) poisson rouge nightclub and scenic designer Hannah Levesque’s neat embellishments to the stage include a fence and a neon graffiti backdrop that depicts a wacky atmosphere. Andrew Hunt’s lighting design is suitably flashy. A visually witty array of garments is employed by costume designer Olivia Hern to drolly realize all of the exaggerated characters. 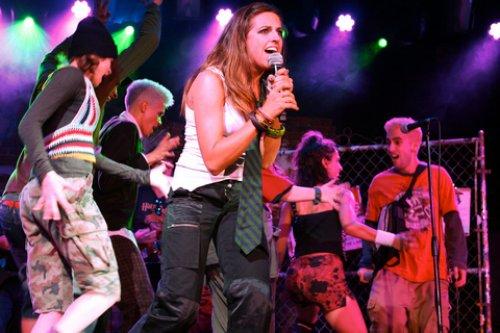 The main audience area is a standing section near the stage with a bar nearby. VIP and premium seating requiring a two-drink minimum is also available. A 20-minute concert by a guest band precedes the show and at the end of the evening there’s a costume contest and karaoke.

Pop Punk High is at best passable entertainment and for some with the communal experience and alcohol that could make for an innocuously enjoyable night out.