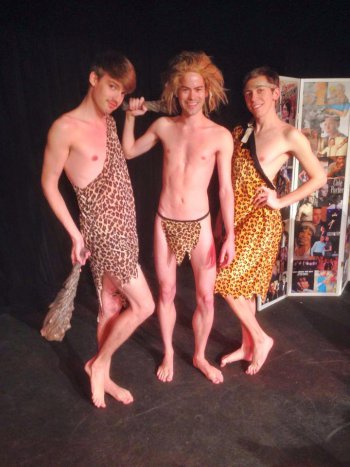 Billed, as a work in progress, Mad About the Boy is a historical musical revue that traces the gay and lesbian experience in the United States, through standards and new songs, and is performed by an exuberant young cast.

We open in just three days.

is a sign hanging on stage expressing the narrative conceit of the show. The audience at the 13th Street Repertory Theater is watching a rehearsal of Mad About The Boy.

Cast members in street clothes appear and announce that this is a show about “same sex courtship,” and impart historical facts about the subject. There is a lengthy, contained sequence involving Oscar, a young male apple seller in 1929, who is distracted from his trade by several men who are interested in him.  He falls for Mr. Hemingway, a traveling corset salesman.

The action shifts to the present as Reverend Billiam S. Love, a fiery Christian preacher barges in. He has crashed the rehearsal to confront the gay performers with the error of their ways and to convert them to ways of The Lord.  He is accompanied by his Bible toting fiancée. This broadly conceived intrusion precipitates a fierce, recurring debate.

That the lyrics to “America, The Beautiful” were written by a lesbian, Katharine Lee Bates, is among the representations of the show’s considerable focus on women.  There are mentions of Ma Rainey, Bessie Smith, Josephine Baker, and Billie Holliday.  Two young women in tuxedos perform à la Marlene Dietrich for “When the Special Girlfriend.”

The creative force of the show is Chip Deffaa.  His script is erudite, passionate, and entertaining.  His musical arrangements expertly reconfigure the score’s many songs for optimum effect for piano. 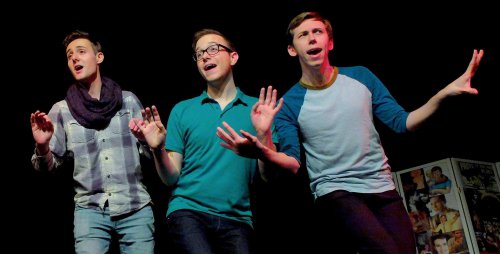 Luka Fric, Al Roths and John Brady in a scene from “Mad About the Boy” (Photo credit: Jonathan M. Smith)

The voluminous and cleverly selected score is made up of many standards by the likes of Cole Porter, Irving Berlin, Noel Coward, obscurities, as well as four original songs written by Mr. Deffa, and ones by Rick Crom, and Anthony Rapp and Joe Pisapia.  The presence and expertise of music director Richard Danley on piano is a great asset.

Defaa’s direction is imaginative and is aided by the sensational choreography of Rayna Hirt, in creating precise, amazingly arresting production numbers with the large cast on the small stage.  Standouts include a rousing military tap dance, Cole Porter’s “Find Me a Primitive Man,” with cast members dressed as cavemen, and a thrilling version of Noel Coward’s “Mad About The Boy,” with cast members wearing all black.

Some of the cast varies at differing performances, and the following were at the performance attended.

The blonde, beaming and dynamic Joris de Graaf, appears throughout the show to great effect.  He opens it with a lively “Let’s Misbehave,” and gives wonderfully anachronistic performance as the 1920’s traveling corset salesman, Mr. Hemingway.

Boyishly charming and diminutive, Cody Jordan, splendidly portrays Oscar, the harried apple seller, and sings a number of songs, including the comically suggestive, “I Ain’t Gonna Give Nobody None of My Jellyroll,” and the jaunty “Puh-lease, Mr. Hemingway.”

Tall, lanky and expressive, Toby Medlyn, is wickedly funny as the nefarious Reverend Love.  He sings and taps exquisitely during his appearances. 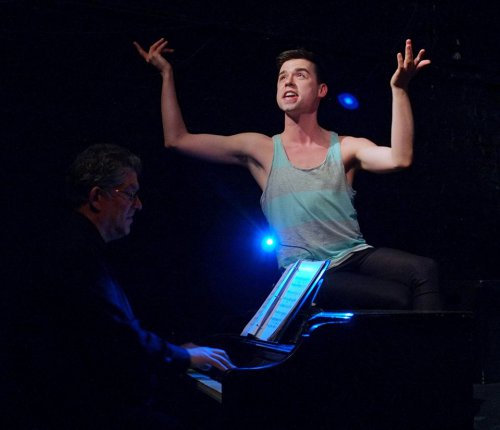 Benjamin Dreier atop of the piano in a scene from “Mad About the Boy” (Photo credit: Jonathan M. Smith)

Maite Uzal and Katherine Paulsen expertly pop up in a variety roles and superbly perform the Marlene Dietrich style number.  As a caveman, and singing “Let’s All Be Fairies,” Michael J.C. Anderson is a wry delight.  Looking exactly like the dancer he plays, Michael Czyz is winningly featured in many sequences.

Very dramatic and revelatory portions of the show focus on the African-American gay experience in the United States.  Bringing great depth and poignancy to these sections is Michael Knowles.  He is relatively mature in comparison to the rest of the cast who all appear to be in their 20’s.  He movingly recounts the memories of a Georgia native who ran away from home to be with a man, and commandingly performs the blues songs, “The Boy in The Boat” and “Sissyman Blues.”  Shinice Hemmings powerfully does a medley that includes, “B.D. Women’s Blues,” “Prove It On Me Blues,” and “T’aint Nobody’s Bizness If I Do.”

Since there are several of times where the cast is scantily clad, it’s appropriate that the clothing store TAGG, is thanked for providing the quite colorful underwear on display.   These instances come across as playfully exhibitionistic, rather than gratuitous.

Nobly intentioned, and well executed, the chief flaw of Mad About the Boy is its length.  At two and half hours with an intermission, it is crammed with period details, many musical numbers, and shifting narrative tones.  This all makes it difficult at times to absorb everything as it goes along with its desired comprehensiveness. With streamlining and condensing during this creative tryout, it should even more so achieve its educational and entertainment goals.