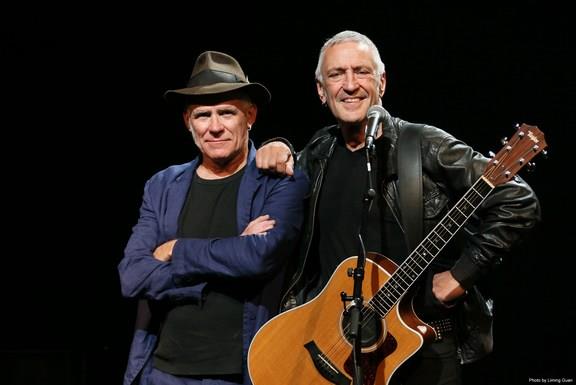 Stewart D’Arrieta and John R. Waters in a scene from “Lennon: Through a Glass Onion” (Photo credit: Liming Guan)

“The only thing no one can touch is the music. So if you want John, Paul, George, and Ringo, get the records out and put them on. That’s what they’re there for,” is a John Lennon quote from the biographical show, Lennon: Through a Glass Onion.

This remark incites the question; why not just listen to the records as opposed to attending another theatrical representation? Beatlemania opened on Broadway in 1977, and there have been numerous theatrical productions since, depicting the group and John Lennon. Apparently artists and producers feel that there is audience demand for these nostalgic vehicles.

Shortly after this show begins, the sound of gunshots is heard, followed by “A Day in the Life.” The sounds of gunshots followed by “Imagine” are its equally unsurprising conclusion. During “Lucy in the Sky with Diamonds,” slides of flowers and shapes float around for the requisite psychedelic effect.

“Glass Onion” is a song from the 1968 album, The Beatles, which contains references to previous songs of the group. It appears here to be a touchstone memory device. The show describes selected chronological events that skim over Lennon’s life. These include his childhood, the “We’re more popular than Jesus now” controversy, Yoko and the band’s breakup, their world peace activities, the deportation proceedings, the “lost weekend” with May Pang, the New York City years and the birth of Sean. Obviously included is the tragic day of December 8th, 1980.

John R. Waters is a British-born performer who has had a long and prominent career in Australia. He wrote and performs this show that consists of him using a Liverpool accent delivering biographical statements as John Lennon, followed by him singing snippets of over 30 of Lennon’s and The Beatles’ songs. That’s the show.

The lively and very talented Stewart D’Arrietta joins him on piano and as an occasional performing foil. They’re on a black, bare stage with smoke effects and spotlights that go on and off.

Clad in black jeans, black leather jacket and black T-shirt with a tree design; Mr. Waters’ captivating rock star presence recalls that of the mature Terence Stamp and Malcolm MacDowell. However, instead of relying on his own persona, he does his Lennon impersonation to varying results. At times his singing of these familiar songs comes across as strained.

He stands rigidly before a microphone on a stand, slightly off-center stage for nearly 90 minutes. His occasionally putting down his guitar and later picking it up to play it again are really the only visual flourishes. This static format soon becomes predictable and tedious.

The Beatles broke up in 1969 and John Lennon was murdered in 1980. For a segment of his and their many admirers, and those curious about them, Lennon: Through A Glass Onion may possibly have virtues as entertainment. Knowledgeable others may find it dull and clichéd, and would prefer listening to the records.