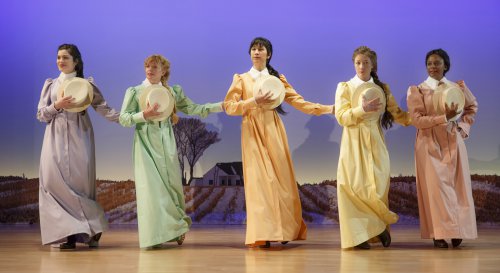 “Lots of people have herpes.  It’s kind of a rite of passage.  Like date rape.”  “What is Auschwitz?  A fashion magazine?”  These are just two of the many cringe worthy zingers delivered by the very hard working comic cast of Iowa, a smug and pointless black comedy musical.

In his outrageous movies, John Waters achieved artistry with presenting seemingly tasteless dialogue and situations. This was due to his great cinematic talent, creative integrity, and preoccupation with classic narrative.  This show’s attempts at shock value come across as lame camp and its stridency provokes disinterest.

Sandy, a garrulous 40ish divorcee has reconnected through Facebook with Roger, her high school prom date of 30 years ago.  He lives in Iowa, and she plans to move there to marry him. She and her bookish, 14 year-old daughter, Becca, set out on a picaresque journey.

An actor in a suit wearing a pony mask and a tail trots out on stage a few times and later appears some more times without the mask to sing.  A woman in a burqa (ordered from Amazon) walks around with a laptop.  An ensemble of relatively mature women cavorts as high school cheerleaders, one of whom has sex with the pony.  This same multi-racial group have another production number as all of them portray teen detective Nancy Drew.  The show opens and closes with a young girl dressed as a boy in a seersucker shorts suit who sings. The drawn out finale involves a bunch of polygamous wives wearing different colored pastel gowns and singing what is called “Oratorio.” These are among the David Lynch-type surrealistic flourishes on display.

Obviously, this is all very amusing and significant to book writer Jenny Schwartz.  She also co-wrote the professional sounding but unmemorable score’s lyrics with composer Todd Almond.

In addition to John Waters, these absurdist proceedings channel the work of Jules Feiffer and Christopher Durang, though without any of their depth or relevance. 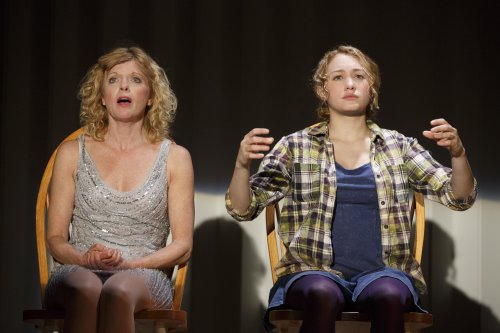 Karyn Quackenbush as Sandy and Jill Shackner as her daughter Becca in a scene from the new musical “Iowa” at Playwrights Horizons (Photo credit: Joan Marcus)

The delightful Karyn Quakenbush, whose name sounds like it’s from a Marx Brothers movie, plays Sandy.  Indeed, with her frantic energy, intense focus, and supreme comedic gifts, she could have held her own with them.  She breathtakingly delivers mounds of verbiage with delightful precision and comes close to making it seem funny.

Lee Sellars (playing all of the men), Cindy Cheung, April Matthis, Annie McNamara, Carolina Sanchez, Jill Shackner and Kolette Tetlow make up the rest of the accomplished cast, most of who play multiple roles.  With more substantive material they would be truly hysterical.

Music director and conductor, J. Oconer Navarro is on piano, along with Brian Ellingsen on bass, and Sarah Haines on viola.  Their musicianship is quite deft.

The minimal set includes a beautiful painted backdrop of an Iowa farm and field by scenic designer Dane Laffrey.  The costumes by Arnulfo Maldonado are flamboyantly witty.  The lighting design by Tyler Micoleau and sound design by Daniel Kluger greatly enhance the show.

Director Ken Rus Schmoll’s staging is a welcome asset.  The swift pacing, scenic tableaus, and images, are faithful to the material and make the show watchable.  The direction along with the performance and technical elements are all at a high level, but cannot elevate such deficient material.

Devotees of metatheater may very well find Iowa entertaining.  Most anyone else would highly likely to find it to be wearying and painfully unsatisfying.