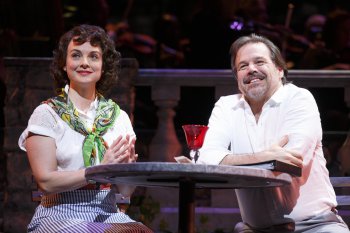 Melissa Errico as Leona and Richard Troxell as Renato  in a scene from “Do I Hear a Waltz?” (Photo credit: Joan Marcus)

Melissa Errico, Karen Ziemba, and a lively cast do all their best in this excellent Encores! concert revival of Richard Rodgers and Stephen Sondheim’s lackluster 1965 flop musical, Do I Hear a Waltz?

Leona Samish is a hard-edged, single New York City secretary in her late 30’s vacationing alone in 1960’s Venice. At the boarding house where Leona is staying, she meet the landlady Fioria, a middle-aged, wise and life-affirming Italian woman.  Other guests there include a stereotypically older American tourist couple and a younger American couple with a shaky marriage.   While shopping at an antiques store, Leona becomes the object of desire of the shop’s owner and a stormy romance ensues.

Book writer Arthur Laurents’ source material was his own 1952 Broadway play The Time of the Cuckoo that ran for 263 performances and starred Shirley Booth as Leona who the Tony Award for Best Actress in a Play.  The successful 1955 film version of it, Summertime was directed by David Lean and starred Katharine Hepburn.

Laurents instigated this musical adaptation coercing a reluctant Stephen Sondheim to write the lyrics with composer Richard Rodgers.  The resulting show opened on Broadway to mixed reviews and a disappointing run of 220 performances.

In his autobiographical survey of his work, Finishing The Hat, Sondheim details his harsh view of the show and the discord among its creators’.  “Not a bad show, merely a dead one.  It was well constructed, literate, even entertaining.  It has some wit in the lyrics, some lovely music that could have only come from Richard Rodgers and a neatly constructed touching libretto, but it was dead to begin with.”  That was because Sondheim believes because “there was no need to musicalize the piece.”

Rodgers’ music is melodious but not very memorable and Sondheim’s lyrics contain his characteristic acidic wit and some of the songs seem like adept outtakes from his later shows.  The book is a familiar treatment of the troubled American abroad clashing with the locals. It’s all mildly entertaining but not very compelling and overall dull. 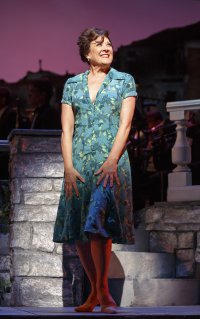 Karen Ziemba as Fioria in a scene from “Do I Hear a Waltz?” (Photo credit: Joan Marcus)

Ms. Errico gives a smashing musical theater performance.  Her gutsy broad that’s tough on the outside and unraveling on the inside characterization is quite captivating.  Her singing of several of the wan attempts at showstoppers exhibits her charismatic range.  It’s definitely a case of a performer elevating weak material with their talents.  Her commitment is as intense here as if she were playing either Sally or Phyllis from Follies particularly for the boozy ode to self pity, “Everyone Loves Leona.”

Using a strong Italian accent, double takes, expert comic timing and forceful physicality, Ms. Ziemba is terrific as the owner of the pensione.  Her hilarious delivery of the sarcastic song “This Week Americans” is one of the highlights of her vibrant serio-comic performance.

Claybourne Elder and Sarah Hunt are both winning as the golden young couple Eddie and Jennifer Yeager.  Their rendition of the Company-style biting take on marital infidelity “We’re Gonna Be Alright” is funny and emotionally effective.

Nancy Opel and Richard Poe bring their charming presences to the stock characters of the McIlhennys, the American elder tourist couple fixated on their frenetic itinerary.

Sarah Stiles is marvelously combines flamboyance with underplaying as Giovanna, who works at the pensione.  Zachary Infante’s quirkiness is appealing as Mauro, a boy who befriends Leona.  In the small role of Di Rossi’s son Vito who acts a go between, Michael Rosen is boyishly intense. 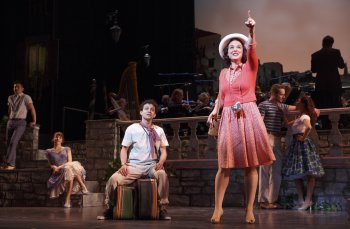 Zachary Infante as Mauro and Melissa Errico as Leona in a scene from “Do I Hear a Waltz?” (Photo credit: Joan Marcus)

Director and author of this concert adaptation Evan Cabnet has expertly staged the show with flair and visual precision.  Chase Brock’s choreography is a delightfully swirling series of numbers that has the wonderful company dancing in representative Italian sequences that add needed energy to the book scenes.

Music director Rob Berman and The Encores! Orchestra’s supreme musicianship does great justice to the score.  The beaming Mr. Berman even was involved in a few gags with the cast.

Because of the creators of Do I Hear a Waltz?, this “lost” work is of historical interest and Encores! has given it an outstanding production.  But as Sondheim describes it, “Discussing the song “Bargaining”…I said it was pleasant but no showstopper.  Unfortunately, that describes the whole show.”

Running time: two hours and thirty minutes with one intermission