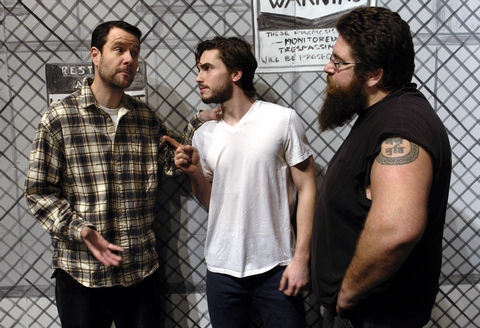 An American Worker is an agitprop musical in the spirit and tradition of social consciousness American theater such as the works of Sidney Kingsley, Clifford Odets, and Marc Blitzstein’s The Cradle Will Rock.  Though well intentioned, it is deficient on all crucial levels.

It begins in an unnamed Pennsylvania town, presumably in the present, where the 75th anniversary of Union Steel is being celebrated at a company picnic.  The festivities clash with demonstrations by striking workers.  This is a harbinger of bad things to come, as the mill soon closes. Despair, poverty, drug addiction, and hopelessness take over.

The book by Tom Attea comes across as a clunky screenplay rather than as the spine of musical.  The action shifts to numerous locations with burdensome scene changes, often for a just a few lines of earnest, trite, and rudimentary dialogue. Arthur Abrams’ music is proficient and contains some fine jazz tunes.  Mr. Attea’s lyrics are often simplistic, as when the CEO explains the company’s woes:

We’re all the victims of dumping!

For less than they cost to make

The score also has numbers that extoll the virtues of the workers that are equally heavy handed:

“And all we do is appeal

Through our union for a square deal,

So we get fairly paid—

As an American worker

A worker who’s proud to be

On the job in the land of the free—

On the job in the land of the free!”

The characters are all familiar types that here don’t really transcend clichés.  There is the lead, a fiery young man who marries his stalwart sweetheart.  The amiable retired father.  Colorful best friends.  Duplicitous executives.  Upstanding townspeople.

The staging by Mark Marcante purposefully and fluidly moves everything along.  His set design wondrously adds authentic visual imagery.  A large backdrop of a full-scale line drawing of the town with the mill prominently featured is on wheels and separates to create various locales.

The choreography by Angela Harriell is accomplished but is often awkwardly and sometimes bizarrely used, making much of it feel out of place.  There’s a big tap dance for the young couple that looks like it’s a production number from a cheery musical comedy.  A scene in a hair salon launches a sultry sequence with female stylists in scanty leather outfits.  A sort of dream ballet with another couple representing the two leading characters feels extraneous.

Fifteen performers comprise the cast and ensemble, and their performances are all energetic, if not always up to the singing and dancing skills required of a musical. Mark Ryan Anderson is the anchor of the show as the newly married, soul-searching, unemployed steelworker.  This magnetic young man exhibits considerable acting, singing, and dancing talents.  With his great focus, intensity, and charm, his is an excellent performance.  As the supportive wife, the very appealing Kelsey Mathes bring marvelous warmth and depth to the role, as well as breezy girlishness.

The noble goal of dramatizing support for labor in The United States in An American Worker is lamentably not realized by its incapable execution.

Running time: two hours and 10 minutes with one intermission