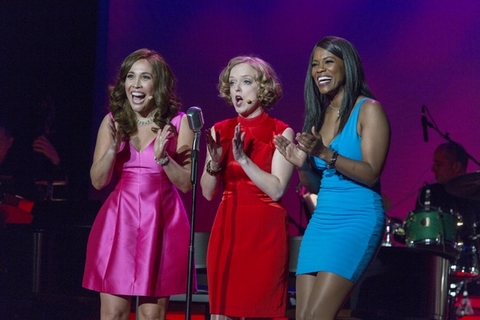 “Rumble, Rumble, Rumble,” is a song from the movie The Perils of Pauline that was sung by its star, Betty Hutton.  Tony award-winning Broadway veteran Cady Huffman turned it into a raucous show-stopping highlight of the fine concert, “Here’s to The Girls!: Hollywood’s Leading Ladies.”  She also did a marvelous “Good Mornin’,” that was sung by Debbie Reynolds in Singin’ in The Rain.

Performed at the 92nd Street Y, as part of its Lyrics & Lyricists series, this event’s other accomplished vocalists, all with extensive theatrical credits were Nancy Anderson, Andréa Burns, Erin Maguire and Zakiya Young. They each had several solos in which they shone, and appeared together in several energetic ensemble numbers including “Diamonds Are a Girl’s Best Friend,” from Gentlemen Prefer Blondes.

This very entertaining show was created and co-written by its director Carl Andress and its host and artistic director Charles Busch.  The presentation’s focus was on songs from movie musicals that were performed by female stars during Hollywood’s “Golden Age,” 1930 to 1960.

Mr. Busch, known as a playwright of campy homages to old movies in which he often plays female roles, was an appropriate and authoritative host.  For most of the proceedings, he sat off to the side wearing male attire wryly reading the often affectionate commentary.  He chronicled the history of the Hollywood musical, its stars, its songwriters and its studios.

This background material described the distinctive cinematic styles of the major studios, and the idiosyncratic moguls who ruled them.  The musical movie histories of Warner Brothers, MGM, Universal, Paramount, 20th Century Fox and Columbia were detailed.  Well-selected illustrative slides and film clips were projected above the orchestra.

There were also personal reminiscences by Busch, about meeting some of these stars. Maxene Andrews appeared with him in Swingtime Canteen, a USO-themed nightclub show, and as Busch remarked, “She didn’t get it.” Attending a Las Vegas TCM home video release event in the 1980’s, “They were all exactly what you would want them to be.” June Allyson “was “dithery”, Ann Miller, “was like a Texas waitress,” Debbie Reynolds was loquacious, and cranky Esther Williams who griped, “I’m not getting a nickel out of this.”

For the most part, sequences of songs were grouped according to a particular studio.  Within those were medleys from the careers of the Andrews Sisters and Shirley Temple.

Busch also did a terrific Marlene Dietrich impression during his solo number, “The Boys in the Backroom,” which she sang in Destry Rides Again.

For the first act, the cast wore different colored shimmeringly bright gowns, and for the second act they wore variations of black and some white. This visually evoked the glamorous texture of Technicolor and black and white films. 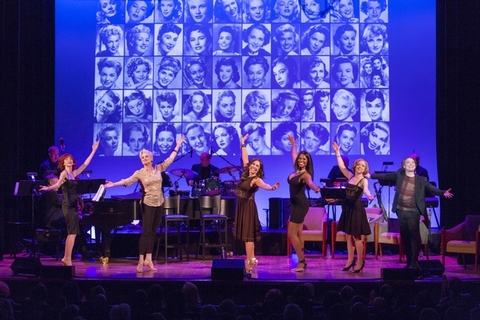 Outstanding numbers by the other vocalists included:

Andréa Burns: Rita Hayworth’s “Put the Blame on Mame,” from Gilda, and Jeanette MacDonald’s “Ah! Sweet Mystery of Life,” from The Naughty Marietta.

Erin Maguire: Ginger Rogers’  “We’re in The Money,” from Gold Diggers of 1933, and Shirley Temple’s “On The Good Ship Lollypop,” Bright Eyes.

Zakiya Young: Carmen Miranda’s “The Lady in The Tutti-Frutti Hat,” from The Gang’s All Here, performed while wearing a fruit hat, and Lena Horne’s “Love” from The Ziegfeld Follies.

The considerable musical achievements were the work of sunny music director, arranger and orchestrator, John McDaniel, who was on piano and also occasionally bantered with Busch.

The excellent orchestra was composed of Jack Bashkow on woodwinds, Sean Harkness on guitars, Tom Hubbard on bass, and Ray Marchica on percussion.

An emotional introduction by Busch preceded the final sequence.  That was a wonderful medley of songs by “The greatest star, Judy Garland.”  The cast thrillingly sang through “You Made Me Love, You,” from Broadway Melody of 1938, “The Boy Next Door,” from Meet Me in St. Louis, “The Trolley Song,” from Meet Me in St. Louis, and “Over the Rainbow,” from The Wizard of Oz. Busch also did a lively “On The Atchison, Topeka and Santa Fe,” from The Harvey Girls.

The opening and closing numbers were a revised “Here’s To The Girls,” from 1945’s Ziegfeld Follies.  The original lyrics by Arthur Freed and music of Roger Edens were artfully supplemented by Carl Andress’ special lyrics and John McDaniel’s additional music.

Here’s to The Girls!: Hollywood’s Leading Ladies was an inspired and delightfully performed historical survey that cleverly recreated the appealing nostalgia of its subject matter.