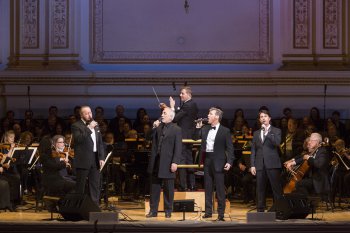 The New York Pops 33rd Birthday Gala: Do You Hear the People Sing paid tribute to lyricist Alain Boublil and composer Claude-Michel Schönberg with a sensational concert at Carnegie Hall’s Stern Auditorium that featured a company of notable performers and special guests.

The French songwriting team created the scores for the internationally popular theater musicals Les Misérables and Miss Saigon.  This joyous and brisk presentation heavily featured songs from those shows as well ones from some of their lesser-known productions.

Steven Reineke, the music director of The New York Pops, masterfully conducted this eminent and superb orchestra and was also the affable host of the event.  Mr. Reineke authoritatively delivered factual commentary and even performed the stirring duet “The Confrontation” with Norm Lewis from Les Misérables.

He also shouted out greetings from the stage to theatrical producer Sir Cameron Mackintosh who was in the audience.   School children who attended as part of the New York Pops’ Kids in The Balcony program that distributes 100 tickets to their performances were acknowledged and they responded by what borough of New York City they were from.

The Miss Saigon section had the novelty of its original star Lea Salonga who created the role of Kim performing “The Movie in My Mind” with Eva Noblezada who plays the part in the current London revival that is set to open on Broadway.  Ms. Noblezada also sang “I’d Give My Life For You.”  Terrence Mann was charismatically sly with his vibrant rendition of The Engineer’s big number “The American Dream.”  Jeremy Jordan’s “Why, God, Why” was commanding. 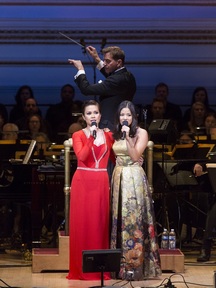 It began with the Judith Clurman-led choral group Essential Voices USA’s atmospheric “The Heat is on in Saigon.”  Mr. Lewis joined them along with Camp Broadway USA Kids for a moving “Bui Doi.”

The vocally and physically suave Hugh Panaro scored with the dramatic “I’m Martin Guerre” from Martin Guerre. Montego Glover, Laura Osnes, Kyle Scatliffe and Essential Voices USA joined Mr. Panaro for the epic “In The Land of The Fathers” from this show.

The Pirate Queen was represented by its lively “Entr’acte: The Wedding Ring” with violinist Cenovia Cummins and The New York Pops’ outreach program participants Kids on Stage where middle-school students perform onstage with the orchestra.  Stephanie J. Block winningly performed the zesty “Woman.”

Inspired by the musical Olivier! was La Révolution Française that was Mr. Boublil Mr. Schönberg’s first collaboration.  Created in 1973, this was the first French rock opera and dealt with The French Revolution.  The rousing “Parisians, Awake and Rise/ Français, Français” was performed by Ms. Glover, Mr. Jordan, Mr. Scatliffe and Essential Voices USA.  The original French Cossette from Les Misérables, Marie Zamora, was a marvelous Marie Antoinette for the wistful song “Au petit matin/In the early morning.”

The final portion of the event was devoted to the team’s most beloved collaboration, Les Misérables with several powerful selections from it.  Ms. Zamora was joined by Ms. Salonga for “On My Own.”  Mr. Lewis returned for “Stars.”

The hilarious “Master of The House” had the comic talents of Jesse Tyler Ferguson as the innkeeper and Broadway legend Patti LuPone as his wife. 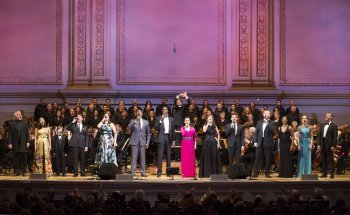 “I Dreamed a Dream” was given a soaring treatment with Ms. Block, Ms. LuPone and Ms. Salonga singing together accompanied by the Essential Voices USA.

The finale brought back the entire cast for the uplifting “One Day More.”

The dual festivities of celebrating the orchestra’s anniversary and honoring Mr. Boublil and Mr. Schönberg made The New York Pops 33rd Birthday Gala: Do You Hear the People Sing a dynamic and reflective jubilee.