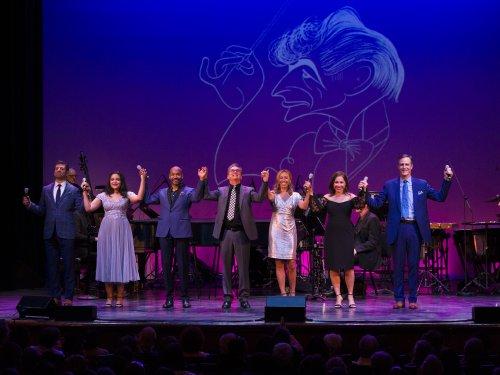 Candide’s giddy overture was of course the euphoric opening number of the 92nd Street Y’s Lyrics & Lyricists Series: Lenny’s Lyricists. This was a splendid concert celebrating Leonard Bernstein’s centennial by spotlighting his collaborators.  The novelty here was that we watched footage of a close up of the hands of pianist Ray Wong as he superbly played via video projected onto a large screen as artistic director Rob Fisher turned the score’s pages.

At the Monday night’s evening performance under review, Mr. Fisher drolly addressed the audience and explained that the announced program would be altered due to the illness of vocalist Andréa Burns.  Despite being under the weather, Ms. Burns’ periodic performances were quite marvelous. As were of the other cast members, Mikaela Bennett, Darius de Haas, Howard McGillin and Tony Yazbeck.

Trouble in Tahiti was Bernstein’s 1952, dark one-act opera in English. It’s the only musical work for which he wrote the lyrics and libretto himself.  Substituting for Ms. Burns for the satirical “What a Movie!” was the acclaimed operatic soprano Cree Carrico. She was terrific utilizing her “gleaming tone” as Opera News described her talents.

The blonde, statuesque and magnetic Ms. Green offered wry commentary derived from her prodigious research and new interviews with integral figures such as Stephen Sondheim. There were plenty of barbs, insights and sly anti-Trump zingers.

Green explained how 1953’s Wonderful Town’s memorable score was written in just four weeks. During tryouts, it’s star Rosalind Russell wanted a big number despite her extremely limited vocal range. Bernstein and Comden and Green quickly came up with the comic classic “100 Easy Ways” which Green sensationally performed and she did an equally as delightful “Conga” with the cast. Also from this show were Ms. Burns and Ms. Bennett’s tender “Ohio,” Mr. McGillin’s humorous “What a Waste” and Mr. Yazbeck’s raucous “Pass the Football.”

“New York, New York” performed by Yazbeck, McGillin and de Haas as the sailors from On the Town was the first song of the presentation that was laden with the familiar and mixed with rarities. Yazbeck later did a haunting “Lonely Town” from the same show.

Written as a tribute to his children who were in attendance, “A Valentine for Jamie and Alexander” showcased de Haas’ considerable vocal abilities. 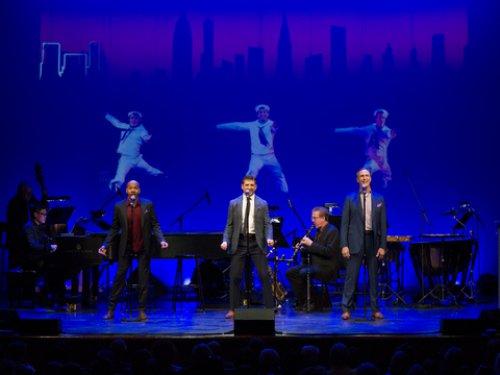 The “Prologue” to 1957’s West Side Story was performed, again with Mr. Wong’s playing projected. This iconic composition was intended by Bernstein to have lyrics Mr. Fisher explained during a fun, analytical lecture with the band replaying segments of it.  Bernstein was talked out of this by the show’s creative team.

Yazbeck, McGillin and de Haas sang these unearthed Sondheim lyrics that referenced the moon as the U.S.-Soviet space race was in full force then. de Haas’s rendition of “Cool” was dynamic. Yazbeck soared with “Something’s Coming” and he and Ms. Bennett’s “One Hand, One Heart” was lovely.

For the 1971 opening of the John F. Kennedy Center for the Performing Arts, Jacqueline Kennedy Onassis invited Bernstein to contribute a piece. Green offered a characteristically caustic account of her being at that ceremony at the age of seven. Having difficulty with Mass’s lyrics, Bernstein joined with the young Stephen Schwartz who was then having success with Godspell. “A Simple Song” powerfully performed by de Haas was a highpoint of his appearances.

Lillian Hellman originally wanted to work with Bernstein on a musical about Eva Peron. “Can you imagine what they would have come up with?” cracked Green. Instead they did Candide in 1956 which reflected that era’s anti-Communist witch hunts with its Inquisition plot points. An assortment of notable lyricists contributed to it with Bernstein’s wife Felicia even providing Spanish words for a difficult rhyme. “Ringaroundarosy” (lyrics by John Latouche) was playfully done by McGillan and Burns and Yazbeck’s “Make Our Garden Grow” (lyrics by Richard Wilbur) was emotionally pleasing. 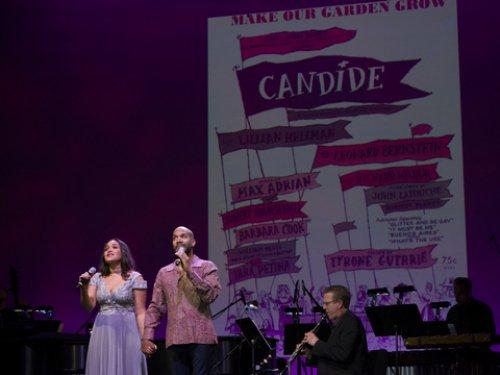 “Only those two could have a flop like that,” observed Jerome Robbins of Bernstein’s and Alan Jay Lerner’s 1976, seven performance fiasco 1600 Pennsylvania Avenue. Inspired by anti-Nixon sentiment, this panorama sought to dramatize American history and was centered around the White House. “You cannot do a musical about a house,” reflected its star Patricia Routledge. Still, “Take Care of This House” is a great song that was perfectly performed by the cast.

Inevitably and because it’s so appropriate, the finale was the cast singing the thoughtful “Some Other Time” from On the Town.

It was a well-paced production due to director Gary Griffin’s staging that was straightforward and inspired. It led smoothly from one number to another while integrating the narration and technical effects. These included the performances, videos, footage of Bernstein and illustrative slides of him and his contemporaries.

In addition to Wong on the piano there was Steve Kenyon on reeds, Dick Sarpola on bass and Erik Charlston on drums & percussion.  This magnificent quartet did great justice to Bernstein’s monumental music.

92nd Street Y’s Lyrics & Lyricists Series: Lenny’s Lyricists was a vastly entertaining prelude to many upcoming festivities that will culminate on August 25, 2018.