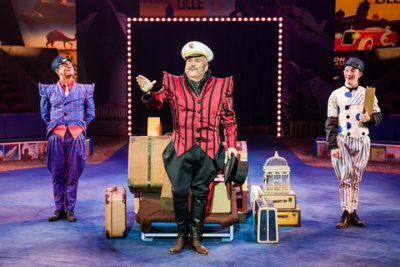 The Charleston euphorically danced by the diverse large cast of performers of the Big Apple Circus was the rousing finale of the troupe’s 38th annual edition, The Grand Tour. International travel in the 1920’s was the theme of this spectacular production that’s a delight for children and adults alike.

“The golden age of transportation!” intoned the ebullient, mellifluous, mutton-chopped ringmaster John Kennedy Kane.  Clad in a red and black striped waistcoat and a black top hat that he doffed later on for a white pith helmet, he was a commanding host.  Assisting him for this marvelous journey were dynamic clown tour guides Brent McBeth and Joel Jeske.  Mr. Jeske also wrote the sensational show and is a creator of this institution.

The stage of the tent is strewn with vintage luggage and steamer trunks and above is a collection of Art Deco travel posters illustrated with period locomotives and ocean liners that is the vivid work of scenic and lighting designer Maruti Evans. This motif was prevalent with nautical uniforms, evening clothes, Charles Lindbergh-style pilot helmets, and exotic foreign outfits fabulously created by costume designer Oana Botez. 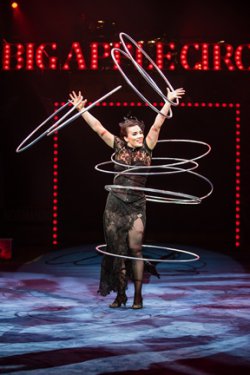 Enthralling highlights of this two-act extravaganza included Chiara Anastasini in a black Senorita dress twirling a hula-hoop and then many of them, resulting in a giant Slinky.  Jenny Vidbel in a gold flapper dress assisted by Emily McGuire with a multitude of adorable dogs who danced, ran, jumped through hoops, and a poodle who rides a scooter.  They later returned with a six Arabian horses that strode and pranced with precision.  Sailor-suited Alexander Koblikov performed an incredible ball juggling act.  Wearing floral frock coats that they shed and Oriental beanies, the Asian Energy Trio did amazing handstands.  Eric and Jayson Dominguez performed death-defying feats on a swirling wonder wheel.  Sergey Akimov breathtakingly flew through the tent on aerial straps. The athletic Dosov Troupe performed amazing stunts on a teeterboard and mats.

Audience participation involved a child brought on stage for a “red nose transplant” to pick one from a basket to wear. Two children and an adult competed with a clown during a round of musical chairs.

Imaginary stops around the world included London, The Orient Express, Arabia where performers in a camel costume appeared, and the jungles of Africa where the Zuma Zuma acrobats did their great routines. 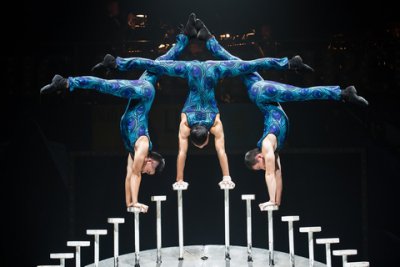 Director Mark Lonergan perfectly shaped the event for maximum entertainment value.  The order of the acts, the ringmaster’s announcements, and the interactions of the clowns are all wonderfully integrated.

Musical director and trumpeter Rob Slowik expertly led the Big Apple Circus Band through the jazzy circus score.   The original music  by David Bandman, Peter Bufano and Jeffrey W. Holmes was cleverly mixed in with their arrangements of bits from familiar melodies such as the theme from Lawrence of Arabia, the 20th Century Fox Fanfare, “Into the Wild Blue Yonder,” and “Puttin’ On the Ritz.”  These aural effects were ravishingly enhanced by Jean-Pierre Perreaux’s sound design.

The twenty-minute intermission could be used to visit the cheerfully decorated concession area for souvenirs, cotton candy and popcorn.  Or one could stay and view another very enjoyable portion of Big Apple Circus: The Grand Tour.  That is the joyous sight of children from the audience onstage riding ponies assisted by crewmembers and parents taking pictures.