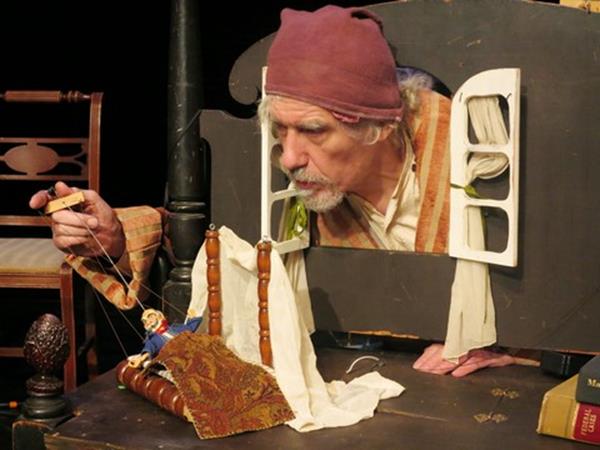 [Note: This is a review of the earlier 2014 engagement at La MaMa.]

“What does it mean to be as dead as a door nail?” is among the many wry and rhetorical zingers spouted by the curmudgeonly comical performer and master puppeteer, Vit Horejš, during A Christmas Carol, Oy! Hanukkah, Merry Kwanzaa.

Mr. Horejš has adapted the show from Charles Dickens’ classic novella. It is an intimate extravaganza of various sized performing marionettes, and holiday songs in several languages, including Czech, English, Hebrew and Swahili.

The two very talented and cheerful singing actresses, Judith Barnes and Hayden DeWitt, enter through the theater wearing Victorian era costumes, one in a black dress, red shawl, bonnet and the other as a boy in a cap and scarf. “We Wish You A Merry Christmas” is the first of numerous eclectic and offbeat Holiday songs they perform while remaining on stage. Later on they even sing Queen’s “We Will Rock You.” They also denote the passing hours in the story by banging a frying pan with a wooden spoon.
Eventually they awaken the white-haired and bearded Mr. Horejš, who has been asleep on stage in a bed. He rises, clad in a long vintage dressing gown and tasseled nightcap. For the next hour or so, with his light, expressive voice, tall body, animated face, and great stage presence, he marvelously and faithfully acts out the story.

Scrooge, Marley, The Cratchits, The Three Spirits of Christmas, and all of the other characters, are often drolly and dramatically represented. Tiny Tim, of course, has miniature crutches and Bob Cratchit has a little bucket to carry coal to heat Scrooge’s counting house. Marley is a jumble of small chains. 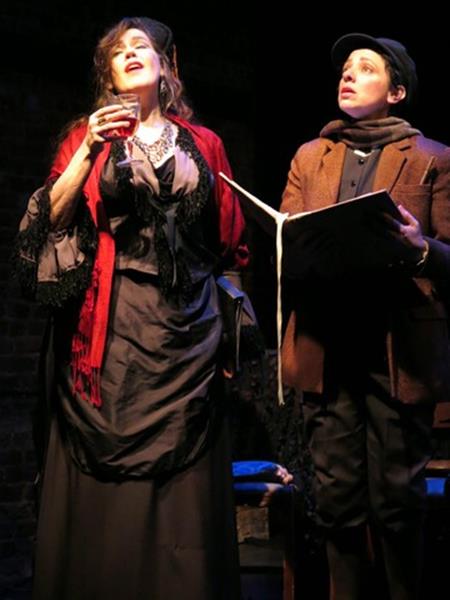 This is a production of the Czechoslovak-American Marionette Theatre (CAMT). It was founded in 1990 by the Prague born Horejš and often uses an array of antique puppets he found. Milos Kasal designed the dazzling marionettes for this production. His creations include Scrooge, as a small old man resembling J.P. Morgan, The Three Spirits of Christmas include an eerie skeletal one and one with wings and a mischievous grin.

Simplifying, yet remaining true to Dickens and being quite edgy, this version amply succeeds at entertaining children with its puppetry and comedy. The topical references that include The Affordable Care Act, billionaire mayors, rising rents, and Fezziwig, who explains that his name used to be Feinstein, should also amuse adults. Briefly fitted into the narrative is an African-American and Caucasian lesbian marionette couple.

As a director, Horejš has a great command of the visual. The puppets perform in various parts of the stage and fly around and enter from windows and trapdoors. The compelling stagecraft is aided immensely by Federico Restrepo’s skillful lighting design that very finely captures the moods and era of the story.

These enchanting effects are all heightened by the old curiosity shop quality of the furnishings on stage, and the authentic looking garments the cast wears, by set and costume designer Michelle Beshaw.

After the first row of seats, and before the stage, a number of children and their parents sit on cushions on the floor, up close to the performance. Their laughter, applause, and rapt silences are a great testament to the charming and powerful storytelling of A Christmas Carol, Oy! Hanukkah, Merry Kwanzaa.

Theater for the New City, 155 First Avenue at 10th Street, in Manhattan

Running time: one hour and 15 minutes with no intermission