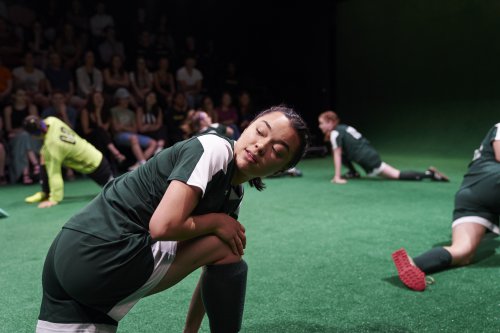 Midori Francis in a scene from “The Wolves” (Photo credit: Daniel J. Vasquez)

Pleasant, formulaic and ultimately not that involving, this expertly staged and delightfully performed play has the novelty of its cast being nine teenage girls.

The Wolves is the name of a suburban girl’s high school soccer team.  Over the course of six wintery Saturday afternoons, we learn about the lives of the nine players as they do warm ups and converse.  Their names are mentioned in passing but they are referred to in the program by their team numbers.

The audience sits on either side of the large runway stage that set designer Laura Jellinek has arrestingly fashioned into an indoor soccer field.  It’s a green vista of Astro Turf that gives the sense “…that the field goes on forever,” writes playwright Sarah DeLappe in her stage directions.

Ms. DeLappe has created a highly theatrical and very well structured work that lovingly captures the sense of contemporary adolescence. DeLappe sparingly and skillfully delineates each character with just enough biographical details.  Most of the girls are from upper middle-class families with some whose parents who are lawyers and psychotherapists.

The realistic sounding dialogue is laden with cultural references.  Skype, Twitter, Nexflix, HBO GO, and body waxing are conversational highlights. Menstruation is a major topic of discussion.  There’s a hilarious debate about the Khmer Rouge. 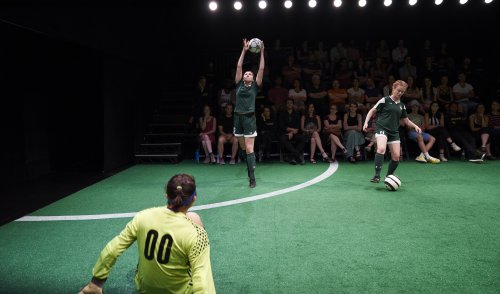 It’s all technically impressive but thematically routine.  Fitfully entertaining, by its strategically dramatic conclusion there really isn’t much impact.

Director Lila Neugebauer has followed DeLappe’s stage directions faithfully and has vibrantly realized the play.  Each scene is a relatively fast-paced sequence with a precise combination of exercises followed by meticulously delivered conversation sometimes with all nine girls on stage.  Ms. Neugebauer’s superior staging is extremely visual and also achieves emotional intensity due to her excellent results obtained from the cast.

Susannah Perkins, Lauren Patten, Jenna Dioguardi, Tedra Millan, Sarah Mezzanotte, Brenna Coates, Samia Finnerty, Midori Francis and Lizzy Jutila are all wonderful as the team members.  Each actress perfectly individualizes her role with a distinct and colorful characterization that is believable.  Their camaraderie is marvelous.

Kate Arrington does her best with the brief part of a soccer mom.  Ms. Arrington suitably conveys the necessary feelings for this extraneous character that appears as part of a plot twist. 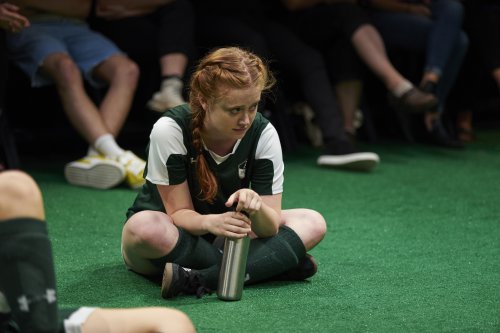 Susannah Perkins in a scene from “The Wolves” (Photo credit: Daniel J. Vasquez)

“The play should take 90 minutes” is another of DeLappe’s stage directions.  This one is insightful and self-aware.  After about 30 minutes it is evident that the play has settled into a predictable groove of youthful expressiveness with narrative revelations imparted during each scene.  Even at 90 minutes, it periodically lags.

The Wolves is accomplished on many levels but is less then riveting.