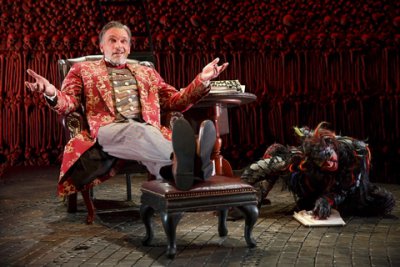 Brent Harris and Shiloh Goodin in a scene from “The Screwtape Letters” (Photo credit: Joan Marcus)

The Screwtape Letters, second show in Fellowship for Performing Arts’ inaugural season at The Pearl Theatre is essentially a 90-minute solo play based on the difficult material of a novel comprised of letters.  Vibrantly presented and impeccably performed by an accomplished actor, it is fitfully entertaining due to its repetitive structure and inherent prolixity.

Perhaps best known for The Chronicles of Narnia novels, the British writer C.S. Lewis (1898-1963) published The Screwtape Letters in 1942.  Over the course of 31 letters, the senior demon Screwtape advises his demon nephew Wormwood on the ways of corrupting a human to ultimately deliver him to The Devil.  This correspondence is characterized by philosophical ruminations wittily expressed on such topics as war, sex, love and pride.

Jeff Fiske and Max McLean have inventively and theatrically taken this 209 page book and faithfully transformed it into a play.  The prologue (taken from Lewis’ sequel, “Screwtape Proposes a Toast,” first published in 1959) has the senior demon addressing an unseen college assembly of young demons in training.  From there, the action shifts to his office where he dictates his communications to his nephew, to Toadpipe, his reptilian-looking non-speaking “demonic assistant.”

This Grand Guignol concept is sensationally realized by the striking physical production.  John Gromada’s chilling sound design configures his spooky original score with its dominant organ along with bomb blasts and other sound effects for very effective results.  Cameron Anderson’s scenic design is a dazzling haunted house affair with the stage wall covered in tiny bones and skulls, a ladder and ramp for the creature to scamper on, and manor-style furnishings.  Hellish red hues are prominent features of Jesse Klug’s eerie lighting design.

As director, co-adaptor McLean has coordinated all of these elements into a visually and aurally arresting presentation and has achieved excellent performances from the cast.

Since the adaptors have chosen the conceit of only depicting letters from one person to another, as opposed to fully dramatizing the book by representing Wormword and his charge, this means that the audience must be entranced by the actor playing Screwtape. 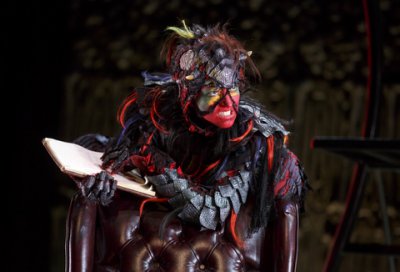 Shiloh Goodin as Toadpipe in a scene from “The Screwtape Letters” (Photo credit: Joan Marcus)

The immense task of delivering that character’s voluminous amount of verbiage here falls to Brent Harris.  Mr. Harris appeared as the villainous Scar in the national tour of The Lion King and played a number of classical roles at numerous major regional theaters across the United States.  His wide range of experience and performing talents are quite evident.  Tall, athletic, physically fluid, possessing a rich and throaty voice and with boundless energy, he commands the stage.

His histrionic gifts are enhanced by Michael Bevins’ fabulous costumes.  Over his Edwardian trousers, shirt and vest, Mr. Brent flamboyantly strides around in a scarlet and gold patterned tailcoat and also a red military jacket replete with medals.

His beard and droll mannerisms at times bring to mind the playfully sly charismatic presence of Vincent Price.  That sort of charm is greatly needed for this play as there is such a large amount of erudite George Bernard Shaw-style recitation by just one person.

A well-known performer endowed with star quality would instantly have the audience’s attention and fascination.  Mr. Brent courageously must rely on just his sheer talent and he does that to enjoyable effect.

Theatergoers unfamiliar with (and even those familiar) the nature of The Screwtape Letters may become restless despite all of its accomplished elements.  After the play’s first 20 minutes, its format is clear and there’s still a good deal of it left.