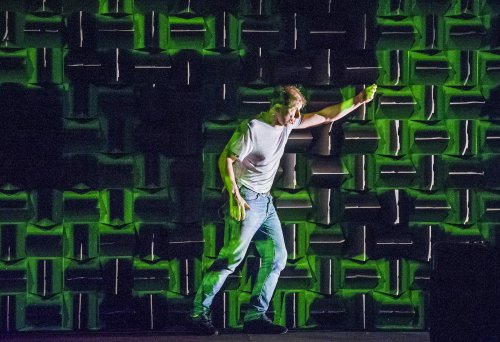 Simon McBurney in a scene from “The Encounter” (Photo credit: Tristram Kenton)

The dazzling artistry of The Encounter is initially exhilarating but grows tedious after 30 minutes and there’s still over an hour to go.  Part mediation on fiction versus reality and part travelogue, it’s essentially a glorified radio show. Technically breathtaking and superbly performed, its length exceeds its narrative interest.

Headsets are on the backs of the audience’s seats when they arrive and which they are asked to wear throughout the show.  The stage is set with a desk, several microphones and many water bottles.  The back wall is adorned with foam sound proofing panels.  The overall look is that of a cavernous sound studio.

Wearing a cap, jeans and an untucked shirt, the athletic and animated Simon McBurney appears and directly engages the audience with a witty routine about illusion.  There’s also a running gag of the sound of McBurney’s young daughter interrupting him.  With his smartphone, he takes a picture of the audience to sends it to her.  Eventually the actual show commences.

Loren McIntyre (1917-2003) was a notable photojournalist for prominent publications such as National Geographic.  In 1969, during an expedition to Brazil he got lost in a remote jungle area.  The Romanian born author Petru Popescu’s book Amazon Beaming is an account of McIntyre’s exploits and inspired this show. Being captured by an Indian tribe and discovering the source of the Amazon River are among the incidents portrayed.

Using his British voice and switching to an American accent as McIntyre, the physically commanding McBurney vigorously performs this man in the wilderness tale. He is accompanied by striking visual and auditory effects. There are minimal abstract projections shown on the back wall of the stage.

Simon McBurney in a scene from “The Encounter” (Photo credit: Joan Marcus)

Gradually the chronicle becomes murky as the audience sits in varying degrees of darkness listening to McBurney through their headsets. Rambling on without a clear sense of plot, his tale devolves into an endurance test.

Gareth Fry & Pete Malkin’s amazing sound design is an amalgam of buzzing insects, flying airplanes, rain, the river, and native tribes people that are all realistically rendered.  Paul Anderson’s atmospheric lighting design sensationally evokes the locales that are depicted.  Michael Levine’s sound studio scenic design is a grand canvas for all the theatrics on display.  The sparingly used dramatic imagery is by projection designer Will Duke.

McBurney is the renowned actor and director who co-founded the acclaimed United Kingdom theater company Complicite in 1983.  Known for its use of extreme movement and technology, they’ve created numerous lauded works such a revival of Eugène Ionesco’s The Chairs and their original piece Mnemonic.  With Kirsty Housley, McBurney co-conceived The Encounter and he has forcefully directed it.

At Tuesday evening and Wednesday matinee performances standby Richard Katz appears in the show instead of McBurney.

Bold and fitfully stimulating, The Encounter’s achievements would be more compelling with a condensed presentation.