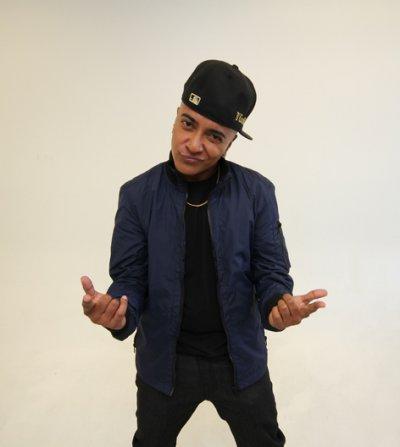 Wild, moving and revelatory, To T, or Not to T is an autobiographical, multimedia solo show written and performed by the dynamic transgender actor D’Lo. The difficult decision to and the profound impact of taking testosterone is the catalyst of this personal exploration.

Trans people are beautiful, magical human beings, do not reduce us to the junk beneath our clothing.

While wearing an all black ensemble of a cap, T-shirt, shorts and sneakers, D’Lo commandingly holds forth with plentiful pop culture references in 70 minutes.  Possessing the powers of an accomplished stand-up comedian he expresses the searing and hilarious details of his transgender journey in an often rapid, hip-hop style alternating with a measured pace.  Audience members are occasionally addressed directly with riotous results.

He was born to Sri Lankan immigrant parents in Queens, New York, and raised in California.  His supportive, doctor father is featured prominently in the show on video and by D’Lo doing a tender and comical impression of him.  In previous shows, his relationship with his mother was depicted.

In childhood as a girl, he identified as male and the trauma of beginning to menstruate is a dramatic highlight. He progressed from behaving as a tomboy to following the path of transitioning to male. This involved eventually getting surgery and crucially, taking testosterone.  He is now happily married to a woman.

Watching Queen Latifah’s music videos while growing up had a great influence on him as did seeing transgender people on The Maury Povich Show.

And around that time, my hair slowly became shorter and shorter, and with the brambles clearing, the more and more freedom I felt, and the more and more I got closer to understanding my artistic path in this world, and started re-merging as the boy butterfly I was. 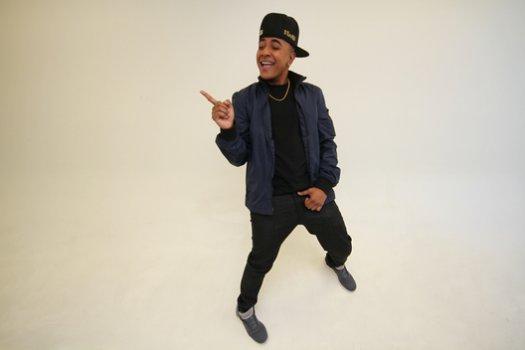 The stage is creatively used as a grand visual landscape. D’Lo jumps up and down on a pogo stick and a trampoline, energetically dances, paces on a platform and climbs on a semisphere, as if in a playground and majestically dashes around wearing butterfly wings.  There’s also a small table with a child’s tea set that is used for droll symbolism.

The back wall has a large screen on which Meena Murugesan’s lovely projections are shown complementing D’Lo’s recitations.  Celestial, nautical and locale images are strikingly woven into the presentation.

In addition to being highly entertaining, To T, or Not to T is cumulatively educational. D’Lo eloquently details the experience of being transgender with engaging humor and passion.

To T, Or Not to T is being presented as part of the performance space Dixon Place’s 26th annual HOT! Festival, an event that is “The NYC Celebration of Queer Culture.”