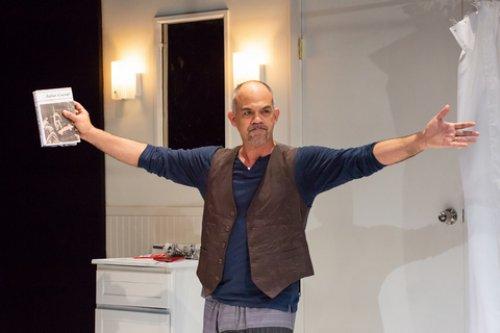 Christopher Plummer’s guest appearance on a 1987 episode of The Cosby Show giving a Shakespearean mini-recital in the Huxtable living room had a profound effect on writer and performer Orlando Pabotoy. That clip is a highlight of Mr. Pabotoy’s marvelous solo show, Sesar that recounts his relationship with his heroic father. Opening with a furious recreation of a storm and closing with an enchanting visual surprise, it’s 65 theatrical and emotionally resonant minutes taking place in the family bathroom.

The elder Pabotoy had a law degree, was an ex-boxer and was the mayor of the Filipino island town where the family was centered. Following the 1986 political upheavals,they relocated to Fiji. Later on, Pabotoy, his parents and siblings emigrated to the United States. His mother was a Peace Corps worker and his father became a stock clerk at Macy’s and an airline employee delivering meals to planes. In addition to depicting the universality of father and son conflicts, the play also explores the theme of the proud achiever humbled by circumstance and courageously soldiering on. 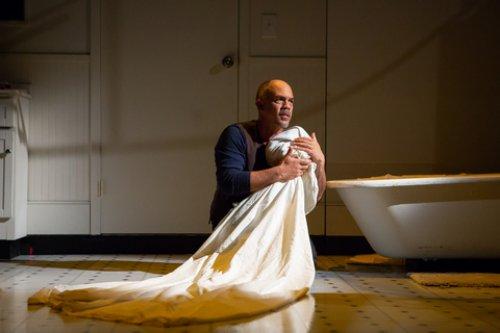 Switching back and forth from perfect English enunciation to Filipino accents and his native dialect, the personable Pabotoy splendidly recreates his young self, his father and characters from Julius Caesar. His dynamic vocal talents are matched by physical prowess that include grandly gesticulating while standing in the shower draped in its curtain. A twirled towel on his head accompanies a speech of Calpurnia’s, a plunger takes on regal attributes and toilet paper is majestically tossed. Marc Antony’s famous oration over Caesar’s body is a thrilling portion and demonstrates his Shakespearean abilities.

Filled with sentiment, Sesar is an uplifting and engaging experience.