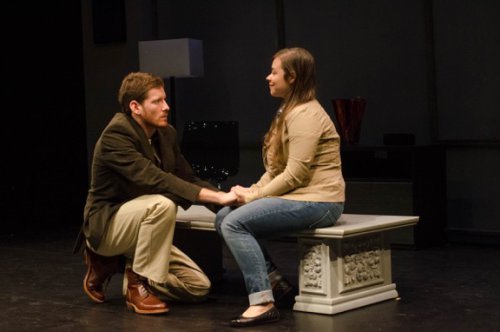 Safe is crammed with so much dysfunction and adolescent angst that if its adult language were excised it would make a perfect ABC Afterschool Special, if those were still being produced.  Instead, it’s an earnest but flat social drama.

Playwright Penny Jackson’s choppy structure of 11 short scenes takes place over the course of a month in varying locations and runs 90 minutes.  It’s all more suitable for the screen then the stage.

The first two scenes are heavy on clunky exposition. Ms. Jackson’s dialogue is sincere but has a declamatory air as opposed to realistic speech.  There are also anachronistic lapses.  Two contemporary teen-age girls refer to Studio 54 and Downton Abbey but are unfamiliar with Ernest Hemingway, though they attend a top New York City private school.

Sixteen-year-old Nina Foster’s divorced alcoholic mother has entered rehab and she has gone to live with her distant father Paul whom she hasn’t seen in six months.  He is a frazzled, very successful Wall Street type who lives in a starkly austere Upper East Side apartment.  He is often away traveling for work and Nina is left on her own.  She is insecure about her appearance, as she is curvy rather than thin.  She smokes cigarettes, is morose and sees a therapist.

Her best friend and fellow classmate Liz is hyper, worldly, and a former bulimic now anorexic who recently was released from a psychiatric hospital.  The two smoke marijuana, drink up Mr. Foster’s premium tequila and trash his apartment.  Liz’s parents are also not that involved with her. Her older sister is off on a meditative retreat in India and has left her infant daughter in her care. 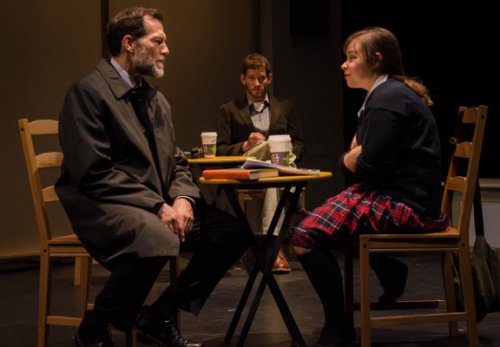 After school, Nina and Liz frequent a local Starbucks.  There, Nina becomes smitten with the 30ish Phillip.  He is a soulful and disillusioned former math teacher who offers to tutor her as she’s failing that subject.  He hangs out there to write, presumably a novel.  Their relationship takes several complex turns including a visit to the Metropolitan Museum of Art.

The milieu of the privileged offspring of upper-class New Yorkers is definitely a subject for dramatic exploration.  However, Ms. Jackson has compiled a plethora of problems for her well drawn if stereotypical characters but hasn’t succeeded at crafting a smooth presentation of them.

Director Glory Kadigan’s relatively inert staging compounds the play’s flaws.  Ms. Kadigan’s work with the actors in the individual scenes is effective but is unimaginative overall.  The stage is large enough to contain the simple elements of the play’s different locales and shift between them.  Instead, it is permanently set as the apartment and two stagehands frequently enter and exit in semi-darkness to bring out and later take away furniture for the other settings.  This makes the scene transitions clumsy and halts the play’s momentum.

Considering the patchy material and presentation the cast’s fine and emotional performances are admirable.

In the difficult central role of Nina, Meghan St. Thomas is quite moving.  With her sunny, girlish presence Ms. St. Thomas offers a vivid portrait of teenage despair and confusion.  Having to strip down to her bra and panties during an awkward seduction sequence, St. Thomas maintains her dignity and valiantly soldiers on with her focused performance. 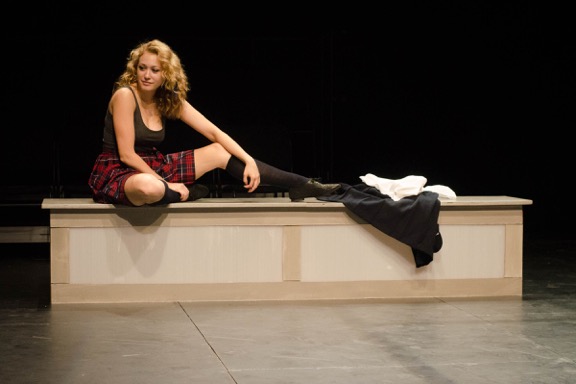 Joel Nagle very skillfully veers from gruffness to anguish as the cold father Paul Foster.  Mr. Nagle is a solid and steady asset to the production.

The personable Sawyer Spielberg is understated and sympathetic as Phillip.

Safe is heartfelt in its intentions but inadequate in its conception and execution.

Running time; 90 minutes with no intermission