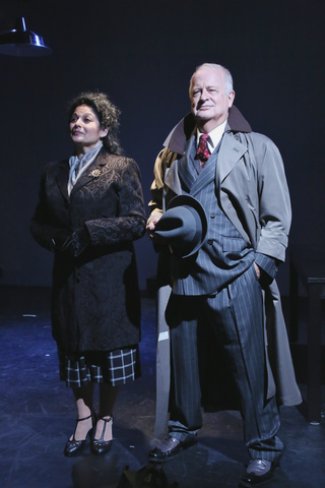 Elise Stone and Craig Smith in as scene from Brecht’s “The Resistible Rise of Arturo Ui” (Photo credit: Gerry Goodstein)

A misguided concept, muddled execution and a weak central performance make this production a tedious experience.

Bertolt Brecht’s play The Resistible Rise of Arturo Ui was written in 1941, but not performed until 1958, two years after his death at the age of 58.  It’s a satirical parable that dramatizes the rise of Hitler, taking place in 1930’s Chicago with mobsters that parallel the Nazis.  The Hitler figure is Arturo Ui, a thug who connives his way to the top of the corrupt vegetable industry.  There are also allusions to Al Capone, Shakespeare’s Richard III and Macbeth, as well as Goethe’s Faust.

British author Stephen Sharkey’s new translation is faithful to Brecht, but the Phoenix Theatre Ensemble has fashioned the presentation as an old-time radio show.  Brecht was known for his self-conscious style of distancing and alienation, where the audience is made aware that they are watching a play but this additional device is a distraction and not as funny as intended.

The conceit is that we’re at a Chicago radio studio watching a broadcast in 1941.  The actors in period clothes are at stands with vintage microphones holding pages of scripts and throw down pages as they finish boisterously reading them.  There’s a woman at an organ who plays during commercials for Wrigley chewing gum.  It’s all very Dick Tracy.

The play is referred to as a spectacle several times but the small stage is cluttered with tables, desks, the organ and the microphones.  Director Kevin Confoy hasn’t worked out a satisfactory arrangement between the set and the ten actors, so there is often a cramped visual quality that is far from a spectacle. 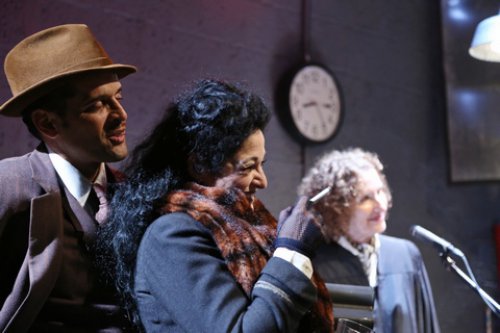 The original stage directions describe titles being projected detailing the specific historical events of Hitler and the Nazis while similar events take place in the Chicago setting.  This production runs rampant with this notion.

Andrew Lazarow’s video design is excellent but is used at such great length that it overpowers the production.  There’s seemingly endless newsreel footage of Hitler and other figures of the era that often sidetracks attention from the actors.  It is also jarring as Arturo Ui here is not very Hitlerian.

Over more then 30 years, Craig Smith has been an admirable force in the New York Theater, having performed in numerous classical roles with the acclaimed and disbanded Jean Cocteau Repertory.  Mr. Smith is a founder and board member of the Phoenix Theatre Ensemble.  Smith’s performance as Arturo Ui is problematic.  He is an extremely accomplished actor, physically fluid and employs guttural intonations out of a 1930’s Warner Brothers gangster movie.  There’s the added comment of Ui mentioning being 60.  This covers the reality of the mature Smith being white-haired.  The actual younger age of the character could be overlooked if Smith fully succeeded at conveying the charisma and menace of this violent tyrant but he hasn’t.  It is a characterization that is worthy of a Sopranos henchman but not of The Boss.

Elise Stone is also a distinguished veteran of the Jean Cocteau Repertory where she was an unforgettable Mother Courage.  Here in several roles she brings her customary grand depth.

The lighting design by Tony Mulanix gets carried away with an overly shadowy film noir tone that is often too murky.  Ellen Mandel’s sound design and original music all contribute greatly to the snappy 1940’s feel of the show.  Debbi Hobson’s costume design is a vibrant assemblage of period clothing.

This production of The Resistible Rise of Arturo Ui comes across more as an academic exercise rather then a full-fledged theatrical incarnation.

The Resistible Rise of Arturo Ui (through November 13, 2016)

Running time: two hours and 45 with one intermission