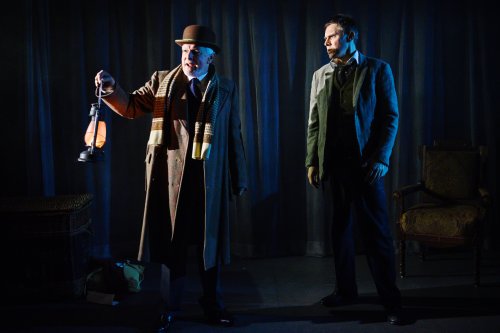 David Acton and Ben Porter in a scene from “The Woman in Black” at The Club Car at The McKittrick Hotel (Photo credit: Jenny Anderson)

Fog wafting, an empty rocking chair moving by itself, blackouts, ghostly apparitions and crashing music are all part of the spooky fun in The Woman In Black. Scary moments, intriguing hokum and laughter abound as this inventively presented British theatrical thriller plays out.

Playwright Stephen Mallatratt’s stage adaptation of author Susan Hill’s 1983 Gothic novel set in 19th century England opened in 1987 and is still running in London. In terms of West End stage longevity, it’s second only to Agatha Christie’s The Mousetrap which premiered in 1952. New York City had a 2001 short-lived Off-Broadway production of it starring Keith Baxter. A 2012 film version of the novel starred Daniel Radcliffe.

This revival is atmospherically performed at the McKittrick Hotel in a dim subterranean pub-style space where drinks are served, just as it was originally performed its first incarnation at the theater bar of the Stephen Joseph Theatre in Scarborough, UK. There are rows of wooden chairs and a medium-sized, long stage for the presentation. 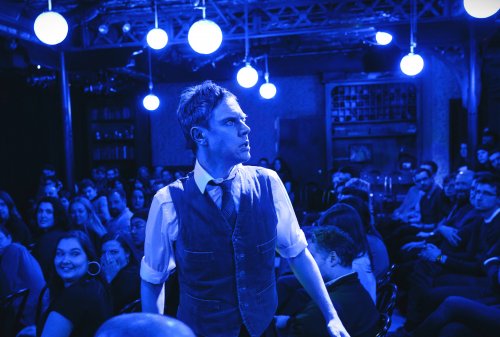 Ben Porter in a scene from “The Woman in Black” at The Club Car at The McKittrick Hotel (Photo credit: Jenny Anderson)

While faithfully retaining Ms. Hill’s classic plot and gallery of archetypal  characters, Mr. Mallatratt also skillfully employs the perennial dramatic device of a play within a play, here essentially for just two actors. This touch makes the piece a showcase for its performers to dazzle in.

Arthur Kipps, a retired solicitor, carries a large autobiographical manuscript as he visits The Actor. Kipps’ goal is to engage The Actor in performing an incident from Kipps’ life for the stage. We then follow the adventures of the young Kipps. On behalf of his firm, he journeys to a remote village to settle the estate of a client, a deceased 87-year-old woman. He gets caught up in past family secrets, mysterious occurrences and with a female ghost who haunts the house.

British stage veteran David Acton delightfully alters his voice and body with commanding ease to portray a multitude of instantly recognizable types. Appealingly starting off as the senior Kipps, Mr. Acton then has a grand time conjuring up a coachman, a servant and villagers with his robust characterizations. The wiry and animated Ben Porter is marvelously conceited as The Actor. Mr. Porter displays great sensitivity, wonderment and poignance when he switches over to enact the young Kipps. Acton and Porter have played these roles in London and their assured teamwork is terrific. 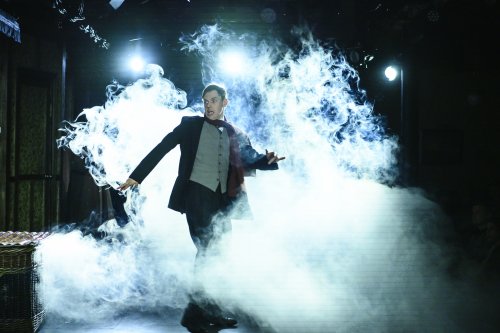 Ben Porter in a scene from “The Woman in Black” at The Club Car at The McKittrick Hotel (Photo credit: Jenny Anderson)

Original director Robin Herford confidently and victoriously mines all of the piece’s suspense, humor and theatricality with his masterful staging. The cast is picturesquely and precisely placed all over the playing area as well as throughout the audience, all for optimum effect. Witty touches include the actors sitting on a large basket, thrashing around and miming a whip, all to simulate a horse drawn coach ride.

Intrinsically hokey yet ultimately moving, The Woman In Black is a rich entertainment.

The Club Car at The McKittrick Hotel, 530 W. 27th Street, in Manhattan