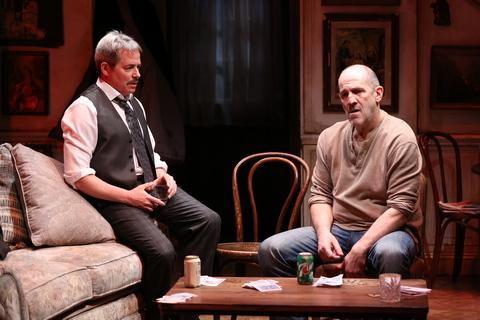 Matthew Broderick and Andy Murray in a scene from the Irish Repertory Theatre’s revival of Conor McPherson’s “The Seafarer” (Photo credit: Carol Rosegg)

This smashing revival of the acclaimed Irish playwright Conor McPherson’s supernatural comedy The Seafarer has a strong cast that features Matthew Broderick. Its alcohol-fueled Christmas-time revelries rival Who’s Afraid of Virginia Woolf? for imbibing, as beer, whiskey and other spirits are gleefully consumed in vast quantities.

We’re at the Falstaffian Richard Harkin’s rundown house in the Irish town of Baldoyle, north of Dublin in 2007. It’s a picturesque landscape of squalor thanks to Charlie Corcoran’s spectacular scenic design. The subterranean living room’s furniture is tattered, clutter abounds with beer and liquor bottles and Chinese food take out containers strewn about the floor. The peeling walls are adorned with faded Christian religious prints including one of Jesus Christ accentuated by a red-light bulb. There’s a gnarly wooden door leading to an undoubtedly ghastly bathroom. A crumbling staircase heads up to the entrance.

After banging his head in a dumpster on Halloween, the cantankerous Richard who is about 60 years old was left blind. His younger brother James who is nicknamed Sharky has come to visit for the holiday and to care for him. Hot-headed and prone to violence Sharky has led a wayward life with a series of low-level jobs and has recently lost his chauffer’s position after getting too close to his employer’s wife. Being on the wagon for a few days exacerbates his short temper.

The jovial and hapless Ivan Curry is a long-time friend who stops by. Nicky Giblin has been long romantically involved with Sharky’s ex-wife Eileen and there’s tension between the men. That comes to boil when Nicky joins the festive gathering accompanied by his acquaintance, the amiable though cryptic Mr. Lockhart. The five men play poker and there are ominous overtones as it becomes clear Mr. Lockhart has come for something other than a hand at cards.

As in his other works such as St. Nicholas, The Weir and Shining City, Mr. McPherson here offers a realistic premise with fantastical twists that perfectly join together. McPherson’s earthy dialogue is an exquisite combination of exposition and character details that all propel the plot with an abundance mordant Irish wit.

Tall, stocky and dressed in a filthy ensemble, the scruffy Colin McPhillamy’s roaring portrayal of the blind Richard is dazzling. Mr. McPhillamy stares into space with sharp focus that projects blindness before it’s been disclosed. He stumbles around, grasping a cane and forlornly bellowing, all while guzzling glass after glass of booze and reveling in the role’s shabby grandeur. McPhillamy is enthralling as he lands every joke and bit of pathos with his breezy delivery that’s simultaneously hilarious and sad.

The bullet-headed and bulky Andy Murray’s performance as Sharky is intense as he conveys the character’s melancholy and quest for redemption. Veering from restrained to explosive, Mr. Murray is dynamic.

As the often-sodden galoot Ivan, Michael Mellamphy poignantly shambles about with good-nature and good-cheer searching for his missing eyeglasses. Mr. Mellamphy brilliantly instigates plot points with his garrulous manner and comic timing and has a touching reverie about how he ruined his family’s Christmas.

Wearing a funereal suit, a black topcoat and a black fedora, Matthew Broderick as Mr. Lockhart has initial dry pleasantness giving way to chilling steeliness as he takes on the persona of a menacing interloper. With his mustache, gray hair and perfect accent Mr. Broderick has the aura of a drab Irish civil servant. It’s a subtly powerful and mature characterization that’s a far cry from his days of Neil Simon and Ferris Bueller’s Day Off though Broderick occasionally still has that youthfully sly twinkle in his eyes. Broderick makes his second appearance at the Irish Repertory Theatre where he appeared in McPherson’s Shining City in 2016. 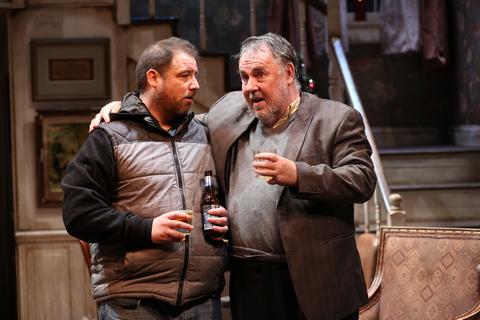 In addition to attaining these rich performances from the cast, director Ciarán O’Reilly’s leisurely but focused pacing allows for each character to be wonderfully delineated and it accelerates as the surprises unfold.  The accomplished physical staging includes a lot funny business, fight scenes and special effects. Mr. O’Reilly has fully realized the author’s vison in a visually compelling fashion.

Lighting designer Brian Nason utilizes hazy hues that achieve a suitably dusty sheen and there are bursts of crimson as the actions ascend into the other worldly.

In addition to the mightily grubby and mundane attire on display, costume designer Martha Hally provides other choice pieces such as a supposedly very expensive Versace leather jacket. Ms. Hally’s considerably contributes to the production’s success with her vivid selections that instantly identify each character.

The Seafarer premiered in September 2006 at London’s Royal National Theatre. It opened on Broadway the next year and ran for 133 performances. Jim Norton won both the Olivier and the Tony awards for his featured role of Richard Harkin. This Irish Repertory Theatre presentation of it is a spellbinding delight.