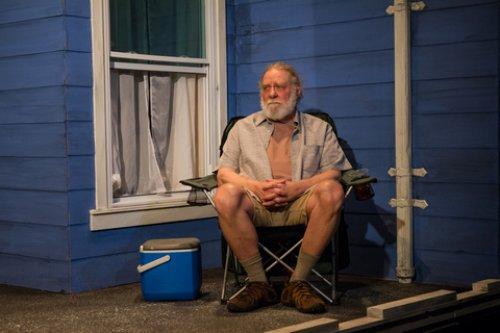 Richard Masur in a scene from “The Net Will Appear” (Photo credit: Jody Christopherson)

You’ve probably met or at least seen guys something like Bernard, the curmudgeon with a tender heart, portrayed by Richard Masur in Erin Mallon’s two-hander, The Net Will Appear, now at 59 E 59 Theaters. In his mid-seventies, Bernard looks quite a lot like the late comic George Carlin. (Peter Fogel’s costuming for him is perfect.) We learn early in the play that he’s a military veteran, but he’s still apparently bitter and regretful about that part of his life. One might guess that he’s attended a few Grateful Dead concerts in his day. But that day is now mostly done, and the world now rests heavily on his shoulders. These days he enjoys his privacy and his whiskey, possibly in that order. But, like Mr. Wilson In Hank Ketchum’s old “Dennis the Menace” comic strip (and subsequent TV and film iterations), Bernard, at the top of the play, is about to meet his match in a kid.

A nine-year-old girl named Rory (Eve Johnson) materializes one day on the roof of the house adjacent to Bernard’s. He is taking some air on his own roof, along with some liquid refreshment. The narrow yet treacherous gap between the two houses limits the physical interaction between the two characters, but it also permits the relationship to develop. Without this sort of moat between them, a little girl and a male senior citizen might not be able to get to know each other at all. Bernard—mindful of the appearance of impropriety—would likely have just made himself scarce.

Rory is what some might call a “corker.” She is precocious, full of imagination and oh so voluble. She talks almost incessantly, about anything and everything. The interactions between the two characters suggest something out of a W.C. Fields movie. But in this case, when the crusty codger’s pint-sized foil talks a blue streak, it can be blue in multiple senses. Rory speaks without apparent filter. When Bernard makes reference to a robin’s red “breast,” she calls him out for saying a bad word, but her own vocabulary can be shockingly salty. Bernard notes at one point that Rory is parroting the words of others, and that is most certainly the case. In fact, much of the humor in the script relies on the idea that the girl is blathering about things she only partially understands.

Eve Johnson and Richard Masur in a scene from “The Net Will Appear” (Photo credit: Jody Christopherson)

Unfortunately, Mallon’s lines for her can sound stilted and implausible. The malapropisms and other naïve remarks don’t always flow naturally. Many seem to have been inserted as easy laugh lines. And exactly how knowing is Rory, really? Is it truly likely that the same smart-cookie kid who knows about anthropomorphism would be unclear about the difference between a “rumor” and a “tumor”? Would she really even be hazy about older people’s hair turning gray? Doubtful. In any case, the use of so many heavy-handed verbal gags turns irksome after a while. Kids do say the darnedest things, but enough already.

Gradually, as the course of a year passes, we learn about the characters’ trouble-filled off-stage lives: Rory is coping with being part of a broken family; Bernard suffered loss early in life, and his wife now has medical issues. The growing friendship between the two opposites is obviously meant to create an occasion for epiphany. Too obviously. The drama in the characters’ contrasting lives plays out with boilerplate predictability. It’s all just a little too pat.

Mark Cirnigliaro’s direction appears to have helped the cast smooth over these script issues to some degree. And he certainly helps his performers convince us that that physical gap between the two houses is potentially deadly. 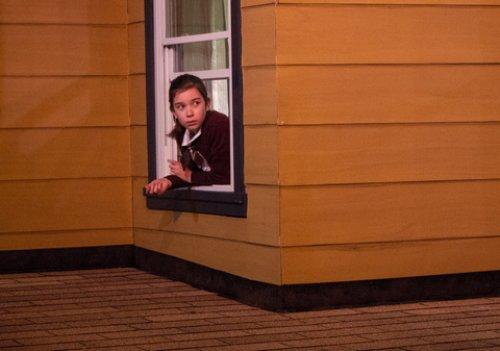 Eve Johnson in a scene from “The Net Will Appear” (Photo credit: Jody Christopherson)

Much of what is good about the production comes from Masur, who makes Bernard seem not a type—i.e., “troubled Vietnam-era veteran”—but, rather, a complex and introspective fellow who doesn’t always show all his cards. As for Johnson, she is clearly a talented and intrepid young performer. Perhaps she can be encouraged to slow her speech down slightly in certain key places, so that the words don’t get garbled.

Lighting designers Justin A. Partier and Jenn Burkhardt help us, from scene to scene, sense the time of day and the passing of the seasons. But Matthew J. Fick’s set, while functional, doesn’t seem especially inspired.

Finally, let’s hope that Mallon is more diligent in naming her future works. The title “The Net Will Appear” is neither graceful, memorable nor particularly apt. And how many potential customers have assumed that it has something to do with the World Wide Web?