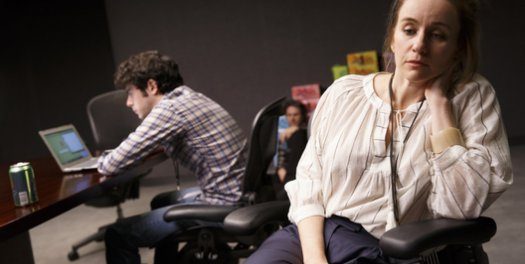 Brian Miskell and Emily Cass McDonnell in a scene from “The Antipodes” (Photo credit: Joan Marcus)

Every new play by Annie Baker is a marvel over the play before. It’s been nothing less than a privilege to accompany her on her journey, as she has been joining ranks with the best American playwrights. Part of what makes Baker the “best,” is that she has her own voice. Whether with Circle-Mirror Transformation, the marvelous The Flick, or her latest and current, The Antipodes, Baker seems to devote a certain amount of attention to group dynamics, which is, after all, the basis of any drama. And how can I have left out reference to John, Baker’s play from last year, which was her first as part of her enrollment with the Signature Theater, and arguably the best of all?

The word “best” keeps coming up when discussing anything to do with Annie Baker. She always seems to surpass herself with her latest confection. When you arrive and take your seat for The Antipodes, you’re confronted with a large, oval, conference-room table, eight chairs, and colorful cartons of soft drinks stacked up against the wall. There’s also an enormous oval lighting fixture above the table, which is practically the same size. (The handsome, if sparse set, was designed by Laura Jellinek.) They both become the equivalent of flying saucers, about to take us to alien places. But as with all of Baker’s plays, the alien becomes oddly familiar.

Though there’s only one young man working on a computer as we’re assembling in the audience, as soon as the other characters arrive and sit at the table, it becomes clear that the eldest is also the “boss,” who leads and conducts the proceedings. His name, it turns out, is Sandy (Will Patton), and he’s in charge of this group of writers or idea-people, coming up with a new “story” for the latest project the group has been employed to concoct. The emphasis throughout The Antipodes is on the prospective “stories” that are told, and on stories in general–creating them, defining them, understanding what the concept of a “story” even means. 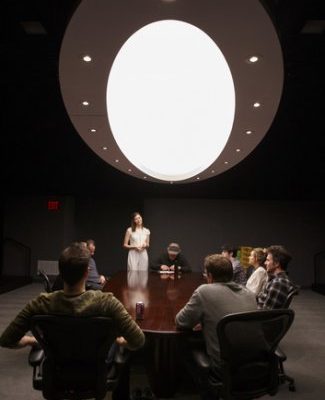 The cast of “The Antipodes” (Photo credit: Joan Marcus)

Though there’s only one woman, Eleanor (Emily Cass McDonnell), working along with seven men, another younger woman, Sarah (Nicole Rodenburg) is Sandy’s assistant or secretary. Sarah keeps taking Sandy’s calls and bringing in menus for the group to order their lunch–or dinner, as the case may be–and interrupting the proceedings. But even when she tells her own, very personal story, Sarah never joins the table: she stands near the entrance to the room, and prattles on.

Early on, Sandy says, “I’m a pretty nice boss. I don’t fire people. Unless they’re complete assholes. You won’t work past seven or on weekends”–the last of which, turns out not to be the case. While the meeting they’re having is presented as continuous, it’s also presented as many different meetings, over the course of many months, apparently. Time itself is most definitely a major topic of the play, referred to time and again as being, for instance, “horizontal and vertical.” “I don’t see Time,” says one of the two characters named Danny (Danny Mastrogiorgio). “Time is not something you see.”

Also early on, they take turns relating their first sexual experiences. And as prompted by Sandy, they tell their personal stories about the “worst thing that ever happened,” or their “biggest regret.” Yet another character, Adam (Phillip James Brannon) raises the subject of “yugas,” or “this Hindu cyclical idea of time and the universe and the idea is that we’re always in one of four ages…. Like right now we’re supposedly living in something called the Kali Yuga which is the most like demonic fucked up age you can be in.” Such a contention would be difficult to dispute right now, given the “alternate” president we have in the White House. 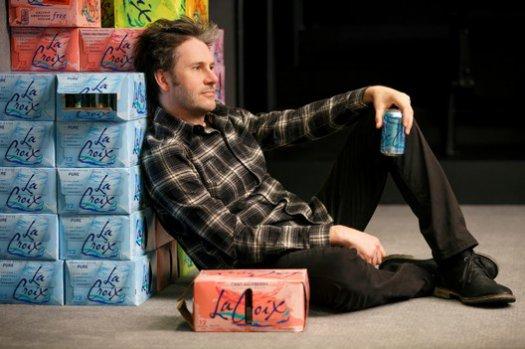 Josh Hamilton in a scene from “The Antipodes” (Photo credit: Joan Marcus)

There are also stories about octopi and clams, and whales communicating with each other underwater, even though one is near Alaska, the other near Brazil. And then there are the personal traits, such as the second Danny (Danny McCarthy), who is continually referring to how much he respects “everyone in the room” and “what we’re doing.”

It’s Sarah’s costume changes, whenever she interrupts a meeting, which help us recognize that time is passing and that we’re at different meetings, over the course of the play. (Kaye Voyce’s costumes are always perfectly apt for each of the nine characters.) Eleanor, the one female on “the team,” is knitting a sweater during the meeting which in the end is completed, as we suddenly observe her putting it on. Props seem to magically appear out of nowhere, as several characters suddenly consume the take-out food that has been ordered for them.

There’s also an ongoing problem with Josh (Josh Hamilton) having to sign a “non-disclosure agreement,” and his lack of an identity badge for getting in the building. And nearing the end of the play, there’s an “apocalyptic” storm brewing outside the building, which compels all of the remaining characters to sleep in the conference room, instead of returning home. Though everything about The Antipodes is rooted in the real, it keeps veering into the supernatural and the surreal–as do all of Baker’s plays. She’s never contented with being down to earth, even though she’s grippingly realistic and grounded in reality.

The rest of the uniformly fine cast includes Josh Charles and Brian Miskell. They have all been directed with a sensitive and surefire hand by Lila Neugebauer, with consistently credible results. And The Antipodes is certainly no exception. Indeed, four of the nine cast-members have the same first name as their characters, which under the circumstances, seems like something other than coincidence.