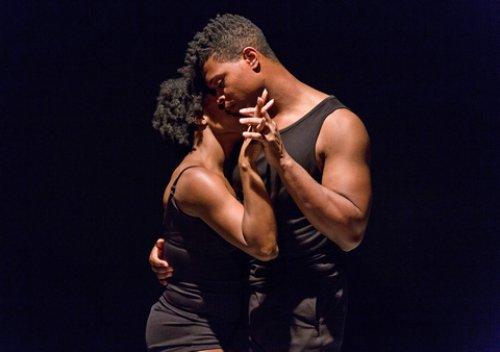 My great, great, great grandfather was a whale. That rock on the beach – the one I was on when the tsunami washed me away – that’s his fossil… I don’t like to boast about my incredible ancestors. In fact, this island is where all my relations – from the titchiest terrapin to the largest leviathan – all come to die. 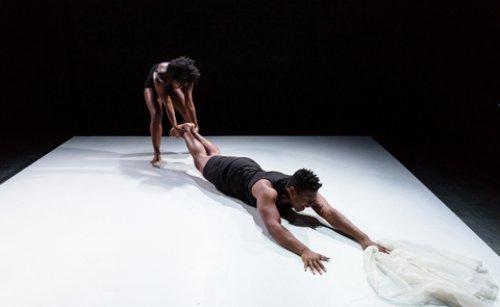 Director David Norwood brilliantly realizes this slightly Americanized reinvention of the play which premiered in London in 2011. Mr. Norwood’s stimulating conception is an exhilarating auteurist blend of gorgeous movements, accomplished modern dance choreography, high caliber technical elements and the beautiful performances he obtains from his cast. They are clad only in the black undergarments that Norwood designed. It all intimately takes place on his arresting self-designed black accented contained set with a white floor surrounded by the audience on three sides.

On the ceiling is a square-shaped arrangement of fluorescent lights that alternatively burn bright, dim and fade. This is a feature of Stacey Derosier’s superior lighting design that achieves a mystical dimension.  Appealing jazz, classical and pop melodies comprise composer Brian Morales’ original music which perfectly complements the actions. Mr. Morales’ bold sound design with its nautical and otherworldly tones further the sense of fantasy. 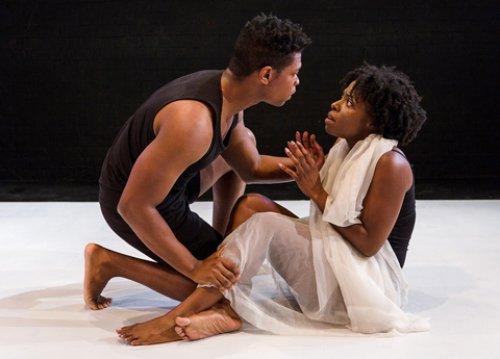 “A Man” and “A Woman” are dynamically portrayed by the effervescent duo of Amara James Aja and Ayana Major Bey who have a tremendous rapport with each other. Their youthful energy, athleticism and rich vocal abilities inform their entrancing characterizations.  Each have many great moments. Mr. Aja delivering a spellbindingly graphic reverie about inserting a hand grenade into the Woman’s vagina and Ms. Bey’s rhapsodic recollection of a party are just two highlights of their grand performances.

Born in 1964, Ridley is an award-winning dramatist, novelist, filmmaker and artist who came to prominence in the early 1990’s. From Tender Napalm’s jolting beginning to its wistful conclusion, it’s a joy experiencing Ridley’s scintillating dialogue, tantalizing scenario and moving resolution. It recalls the haunting dreaminess of some of Alain Resnais’ films where what is real and what is fantasy is not made clear. Besides the hand grenade incident, there a few other stylized recitations of extreme violence such as a descriptive castration. They’re stated in the same heightened manner as the lyrical portions and may be off-putting to some, but these are decidedly nonrealistic and could be interpreted as metaphorical.

Ridley has not had much of a theatrical presence in New York City and so this thrilling incarnation of Tender Napalm could be for many a welcome introduction to his artistry.