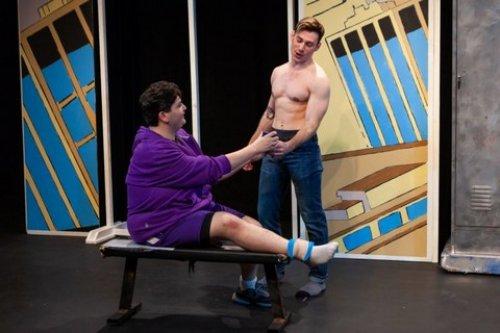 Mr. Clementi was the Rutgers University student who jumped to his death from the George Washington Bridge. This was instigated by his roommate having concealed webcam footage of Clementi being intimate with a male and posting about it on social media.

Weikel inventively uses this event to launch his own poignant scenario. The themes are subtly imparted through his smart dialogue richly conveying the realism of adolescence. A satisfying conclusion is reached from the roundabout structure replicating the format of comic books. That’s characterized by ten characters and 19 short scenes including the fantasy sequences. Melancholy is ever present amidst lightheartedness.

Sixteen-year-old show tune aficionado JT Schuster spends a lot of time with his childhood best friend Rej in suburban upstate New York. Among their pastimes is creating superheroes such as “Guise” and “Paladin.” The play alternates between their adventures and reality with Paladin becoming a guardian angel to JT. He is being bullied by Mal, his school’s popular volleyball king. JT’s car tires have been slashed and there’s frequent verbal abuse. It’s classic jocks versus geeks.

Trey is a wholesome transfer student who had been in JT’s elementary school. He remembers JT and they share an adoration of “This is the Moment” from Jekyll & Hyde. The unathletic JT’s suppressed feelings are set in motion.  He joins the volleyball team to stay close to Trey, forgetting that Mal will be around. Besides brawls, most profound is the flood of feelings unleashed in JT in the locker room as he watches Trey change his clothes. Rej is increasingly pushed aside, and adults are represented by JT’s mother and the gym teacher. Burgeoning sexuality and peer persecution dramatically evolve. We also learn about the different Marvel and DC universes. 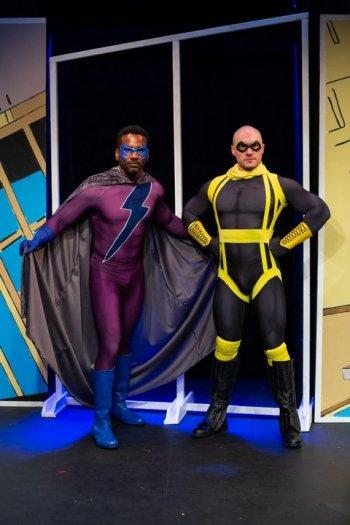 At the center of Secret Identity is Keith Weiss who plays JT. The proverbially baby-faced Mr. Weiss is physically, emotionally and vocally entrancing. With his rumbling low voice and expressive imposing physical presence, Weiss truly takes on the character exhibiting the pathos of the outsider. He casts off sullenness to deliver some amusing Robin Williams-style antic riffs while doing impersonations of teachers. His contorted manner when observing Trey disrobe speaks volumes about how JT feels. Weiss is onstage virtually the entire time and his performance is a chief measure of the play’s success.

Wiry, bug-eyed and with dark curly hair, the beaming Nicky Maindiratta is outstanding as Rej. Mr. Maindiratta takes the traditional side-kick role to a full-fledged characterization. A particularly delightful highlight is when he confesses the secret object of his lust. Maindiritta’s reactions to the friendship’s bumpy detours are shattering.

Veering from cheery to confused, the muscular Kory Alexander Majansky as Trey offers a marvelous portrait of heroic benevolence. With the swagger of James Cagney and the creepiness of Richard Widmark’s neurotic villain in Kiss of Death, Zachary Gault is fascinating as the unabashedly evil Mal. CJ DiOrio and Keno Golaub click as his henchmen.

Michael Joseph Murray’s exaggerated cartoon-like delivery and physique make his Paladin spot-on. Equally as forceful is the lean and fiery Michael Flood as Guise. In the stock though shaded adult roles, Jamie Heinlein is commandingly maternal as Mrs. Schuster and the mellow David Leeper is supremely wise as the sympathetic gym teacher Mr. Bachman.

A special treat is Michael Emerson’s flamboyant voice over as the superheroes’ nefarious arch nemesis Dyre.

Director Mark Finley’s staging is a smooth unison of his sensitive handling of the actors while orchestrating the striking technical elements together into thrilling and thoughtful presentation. Michael Striano’s sharp fight direction injects excitement during the superheroes’ roustabouts and apprehension when violence occurs among the teens. 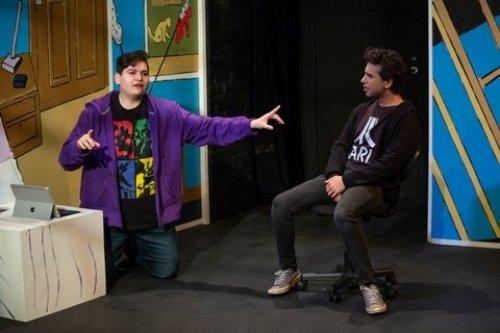 Keith Weiss as JT and Nicky Maindiratta as Rej in a scene from Chris Weikel’s “Secret Identity” (Photo credit: Mikiodo)

The stage is filled by scenic designer Scott Mancha’s series of bold comic book-style panels that ingeniously represent the various locations and allow for swift scene transitions. JT’s bedroom, the school, its cavernous locker room, a comic book store and outdoor spots are on vibrant display.

The novel device of using comic book aesthetics to enact a serious story is superlatively accomplished through Secret Identity’s high level of theatricality.

TOSOS (The Other Side of Silence)

The Siggy at the Flea Theater, 20 Thomas Street, in Manhattan