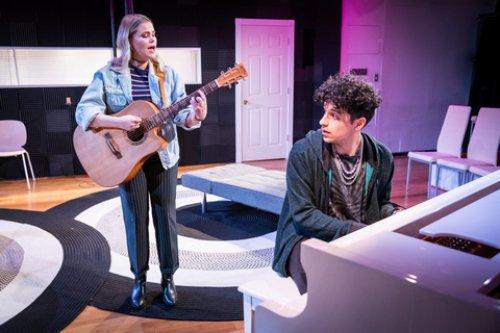 Forty-two takes of one chorus? If I have to sing that shit one more time I’m gonna straight up vom… But I don’t want it to “be good”. I want it to define who I am as an artist.

The eternal heartbreak of show business is given a fresh spin in playwright Adam Seidel’s exhilarating contemporary drama, Original Sound that skewers the music industry. Mr. Seidel’s scenario has many familiar elements, but the writing is impeccable, the performances are superior, and it’s electrically presented.

Like Taylor Swift “with more edge” is how 24-year-old Oklahoma-born  singer-songwriter Ryan Reed was described by the honcho who discovered her while she performing in a small Detroit club. She’s now in New York City recording an album under the authoritarian care of her steely manager Jake Colburn. He’s in his 50’s and when young was an aspiring performer who gave up.  Now, he’s a cravenly pragmatic go-between who balances his client’s needs with those of the record company’s. Stressed out, under pressure and blocked, Ryan steals a tune off the Internet, adds her lyrics and it becomes a hit.

The ripped-off composer is the 22-year-old Latino DJ and musician, Queens native Danny Solis. He is a good-natured, highly talented and troubled young man. His musician father Tommy abandoned the family years before to pursue his dreams. Finding his mother’s negativity about his career goals oppressive, Danny moved out and in with his older married sister Felicia who is a nurse. After a violent altercation with her husband, Danny was thrown out and crashes at his best friend’s apartment. That is the non-binary/female 22-year-old Kari River who becomes his manager after the theft is discovered. Following complex negotiations with Colburn, Danny and Ryan team up to make music. Will everyone’s dreams come true? 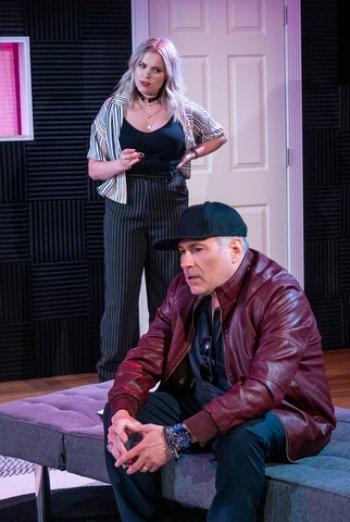 The play is structured as a series of short scenes that each reach a clear climax and then jump cut to the next scene. It’s all very cinematic as we instantly get what’s happening without extraneous explanation.  Seidel fleshes out his stock characters through breezily imparted precise exposition and defined traits. He formulates gripping plot twists that add suspense and depth to what could have been a hackneyed treatment. He brutally depicts the recording industry’s penchant for signing up unique artists and then watering down what made them special by coercing them to sell out to commercial interests. All of the characters are ruled by self-interest, manipulativeness and chicanery. The bleak tone realistically reflects everyone’s curdled idealism and the relationships are all ultimately transactional. It’s  Sweet Smell of Success for a new age.

Recalling the youthful, goofy and likeable emerging John Travolta is the charismatic Sebastian Chacon as Danny. Possessing a high-wattage smile, curly dark hair and an animated presence, Mr. Chacon makes a great impression with his precocious comedic and dramatic acting skills.  He also demonstrates that he plays the piano quite well during the show.

The blonde and blunt Jane Bruce is a terrific Ryan Reed. Ms. Bruce authoritatively struts around with the assurance of a Stevie Nicks or an Alanis Morissette, strums a guitar with brio and expertly sings. Bruce conveys the searing conflict between the artist and commerce through her forceful performance. 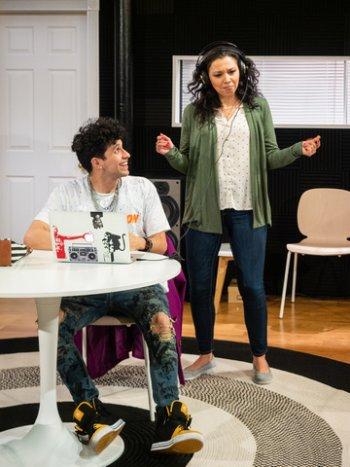 Anthony Arkin’s Jake Colburn is a commanding portrait of show business duplicity as he is soothingly sympathetic, then in a split second goes for the jugular. Mr. Arkin’s effortless pleasantness shifting to iciness is fascinating.

As Kari  River, the non-binary transmasc actor Lio Mehiel’s cheery yet sober persona elevates the traditional sidekick role to poignant prominence. Mehiel is shattering as the friendship with Danny disintegrates as he becomes successful. Cynthia Bastidas is marvelously fierce and palpably maternal as Felicia. Ms. Bastidas’ forceful appearances greatly contribute to the family drama on display.

In the hall of fame of toxic fathers is Wilson Jermaine Heredia’s Tommy. Deep-voiced and intense, Mr. Heredia’s villainy is unrepentant as a reunion with Danny becomes a defensive screed justifying Tommy’s neglect. Heredia’s coldness is supreme when he instigates selfishly evil machinations.  He and Chacon’s scenes together are charged with emotion.

A frenetic sequence has Danny at the piano and Ryan on guitar trying out lyrics as they joyously create a song. It’s a highlight of director Elena Araoz’s vigorous staging that infuses the actions with clarity, momentum and technical accomplishment. 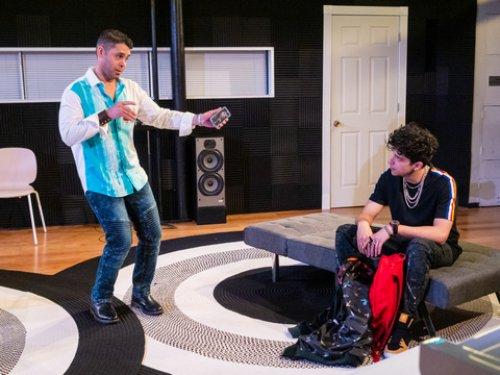 The small theater is configured into a three-sided playing area with three rows of seats, so the audience is quite close to the actors. Scenic designer Justin Townsend’s fabulous black and white themed set represents the recording studio and various residences with creative flair. Basic furnishings, doors and two circular area rugs resembling 45 RPM records combine into an arresting landscape, allowing for rapid scene transitions. A white piano is another grand touch.