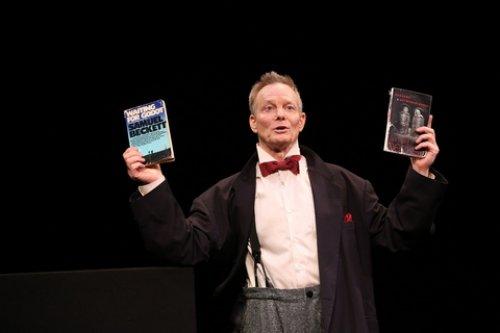 Bill Irwin in a scene from “On Beckett” at the Irish Repertory Theatre (Photo credit: Carol Rosegg)

With wit, humility, and just the right amount of awe, Bill Irwin’s On Beckett pays tribute to the greatest Irish author in the history of France. Tackling this paradox and other much more profound ones, the actor, director, writer and clown wears all of his theatrical hats to intellectually and emotionally untangle some well-chosen snippets of Samuel Beckett’s forbidding canon, including a few key passages from that head-scratching tragicomedy Waiting for Godot, which has been dividing audiences since its 1953 premiere. As Irwin hilariously recounts from his personal history with the play, even pronouncing the name of its famously absent title character once led to a disagreement between him and co-star Nathan Lane.

An Oberlin and Ringling Bros. alum, with a long, idiosyncratic résumé of stage and screen credits, Irwin approaches Beckett from a singular, and quite possibly, ideal perspective, though he’s loathe to overstate his ability to comprehend the notoriously abstruse Nobel laureate. In fact, admitting his ignorance is a significant part of Irwin’s pedagogical strategy and the show’s charm, as he prefaces his clever 90-minute lesson by confessing that he is not a “Beckett scholar” or a “Beckett biographer,” and he would “never claim a comprehensive knowledge, nor reading, of Mr. Beckett’s vast body of work.” It’s this sort of confident professorial honesty that relaxes a class, especially when it knows the subject matter will inevitably turn to life’s oppressive futility and tenuousness.

Although Irwin feels compelled to eventually mention existentialism, it’s with apologetic reluctance, because, as he clarifies, it’s a word that “tends to put us to sleep.” True enough, but that doesn’t mean he is simply willing to ignore Beckett’s soul-churning philosophizing; rather, with his big floppy shoes at the ready, he would prefer instead to just gently ease us into it. 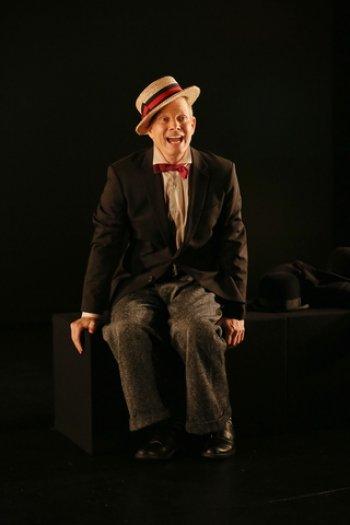 Bill Irwin in a scene from “On Beckett” at the Irish Repertory Theatre (Photo credit: Carol Rosegg)

Not only is this choice effective, but, as Irwin reminds us, it’s also the one Beckett, a vaudeville aficionado, would have most appreciated. Because, although the  grim-faced Irish expat was notably obsessed with the “toil” that defines so much of our shared humanity, he still left room for “play.” Given his rare combination of training and talents, Irwin is well-equipped to explore both aspects of Beckett’s personality, though the latter is where Irwin truly shines, turning Charlie Corcoran’s appropriately spare set into a wonderland of silly sight gags, some of which serve Beckett’s writings, some the show’s scholastic conceit, and some only a pure desire to make the audience laugh (those were my favorite).

As he comically dons a succession of bowler hats, tilting them all just so, Irwin visually reinforces his central point: that if all anyone ever got from Beckett was despair, we probably wouldn’t return to his writings as often as we do, especially the one that occassionally convinces Hollywood big shots to work much harder for much less. Irwin himself was part of a luminous Godot quartet three decades ago at Lincoln Center, under the direction of Mike Nichols. He portrayed Lucky, that “beast of burden” who is literally always at the end of his rope.

It’s a mostly physical role, which obviously suited Irwin’s abilities well, but when the character’s whip-wielding master forces him to “think,” Lucky absolutely lets loose with a densely packed monologue of obscure allusions and metaphors about the nature of everything. In On Beckett, Irwin performs this “nonsense speech” once again, dissecting it along the way and making the convincing argument that, for all of its jibber-jabbering, it might actually be the most enlightening part of the play, not necessarily because of what Lucky is saying but, instead, because of how the other characters violently suppress this forlorn figure’s only opportunity to speak his underutilized mind. 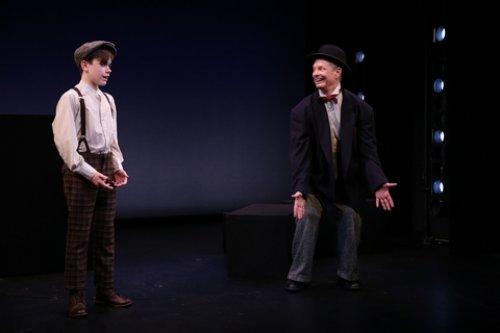 Finn O’Sullivan and Bill Irwin in a scene from “On Beckett” at the Irish Repertory Theatre (Photo credit: Carol Rosegg)

Along with excerpts from Godot and a couple of Beckett’s novels, Irwin relies heavily on several “arcane” prose pieces from a collection Beckett dubbed Texts for Nothing. Irwin was first introduced to them by one of his mentors, the late Joseph Chaikin, a much-respected figure in the theater world who, like Irwin, did a lot of everything well. Using all of these works as a guide, Irwin traces the development of not only Beckett’s artistic voice but his Irish one, too, returning it to the place it originally called home.

In that Nichols-helmed Godot production, Irwin remembers that the actor most “viscerally” committed to shutting up Lucky was Robin Williams. Like Beckett, Irwin doesn’t have to say he’s talking about death in order for us to realize that’s exactly what he’s doing. Specifically, he’s mourning the loss of people, all of them actors, at least for a time, who connected to Beckett’s language, both verbally and physically, as deeply as Irwin still does.

But while Nichols, Williams, and Chaikin may be gone, Irwin doesn’t think Beckett will be leaving us anytime soon. He’ll remain to “haunt” new generations of actors, one of whom briefly appears in Irwin’s not-quite-solo show. As the boy who finally breaks the bad news that Godot isn’t coming, the fresh-faced Finn O’Sullivan embodies the complicated reassurance that life, with all of its disappointments, unanswerable questions, and fleeting joys, will still be there tomorrow, though, of course, not for all of us.