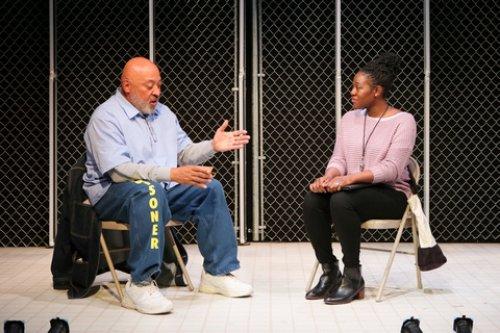 Ernie Morris is a middle-aged widowed African-American writer who arrives  at a contemporary unnamed prison to be a volunteer. A young corrections officer explains in great detail all of the rules and regulations. The inmate she becomes closest to is James “Hakeem” Jamerson, nicknamed Wise. He is a 62-year-old African-American man who has been incarcerated for 46 years for shooting and killing a police officer during a pawn shop holdup when he was 16. Over his many years of imprisonment, he’s matured, having gotten a college degree and leading an education program. He’s been continually turned down for parole and Ernie agrees to help him with his statement for the next parole board hearing. Will they succeed?

They say that if you die in prison, your soul is trapped inside forever. If I walk outside and somebody pulls out their pistol and shoots me dead. At least I’ll die free…I’m closer to death than life by now…I want to prove…that I’ve changed.

Since the sudden death of her photojournalist husband three years earlier, Ernie has been emotionally adrift and blocked as a writer. A former actress, Ernie has been encouraged by her husband to write. The result was the best-selling The Refrigerator Man, which Wise has read and of which he is a fan. She finds renewal as she aids him and also Clue. He is a recent young inmate whose 12-year-old brother has been arrested for murder. Over the course of six eventful months we follow everyone’s progress. 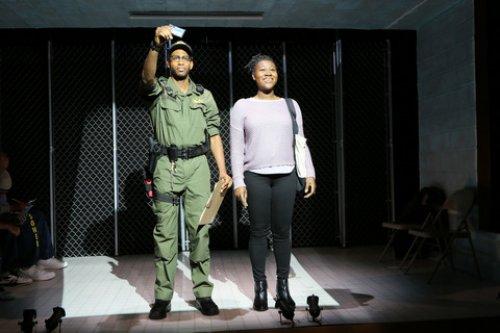 Thomas has created very appealing characters, some with harrowing backstories depicting the sorry circumstances that doom the underclass to tragic fates. She’s crafted a simple and compelling narrative that poignantly plays out with its wistful dialogue.

Physically imposing, radiating sunniness and possessed of a booming mellifluous voice, Keith Randolph Smith is commanding as Wise. During his distinguished career Mr. Smith has appeared in several August Wilson plays and that requisite depth and gravitas is evident in his sterling and touching performance.

The captivating Zenzi Williams combines cheeriness and melancholy for her wrenching characterization of Ernie. Ms. Williams’ charming presence is integral to the production’s success. She wonderfully conveys the necessary emotional range of the character.

With dry understatement and his resonant quirky vocal delivery, Eric Berryman makes a great impression as the prison guard McHenry, veering from laconic to loquacious with force. The animated Curt Morlaye’s magnetic portrayal of the fiercely rapping Clue is filled with anger, sadness and humanity.

Director Kent Gash’s adept staging realizes the play’s sensitivity through expert placement of the cast during the numerous scenes that swiftly flow from one to the next. Unkle Dave’s Fight House’s fight choreography is suitably intense during several altercations. 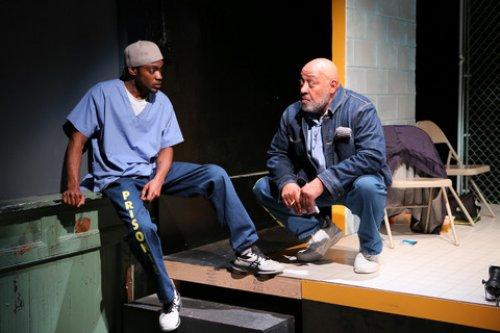 Making resourceful use of the small playing area, scenic designer Jason Sherwood has the back wall set with fences and the stage with some metal folding chairs.  A portion of the fence later slides over to reveal a cell in all its claustrophobic horror. A small forestial patch represents outside. Mr. Sherwood starkly replicates the visual sense of prison. To the side of this configuration is a confined area depicting Ernie’s apartment with basic furnishings.

I know we’re right by the water…but still, this is just a dirt yard, nothing in here to keep them coming back… You see this chart? That’s 30 years of goose tracking. And I’ve caught every single full moon since.

Wise‘s eager visits to the prison yard to see the flocks of geese is typical of Lockdown’s affirmative spirit.