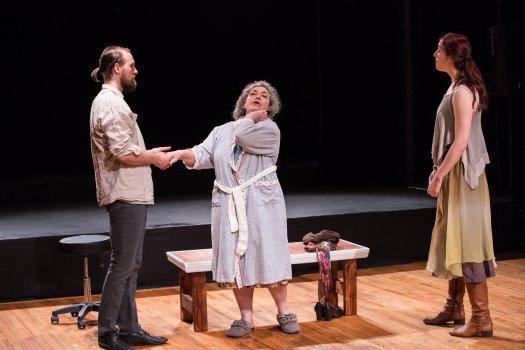 Abounding with arresting imagery, Horse is a problematic play that charts the psychological enlightenment of a harried female advertising chieftain in contemporary New York City. Playwright Janet Bentley is more successful as the director.

“I am Meg. Meg is awake,” intones the heroine during the play’s opening sequence. She’s in her 30’s and owns a boutique-advertising agency with her partner, the gregarious Sam, a college friend who harbors a repressed passion for her.

Meg delivers a stream of consciousness aria as a male and a female dancer dress her in a sleek, gray power suit. Visually and intellectually it’s a compelling introduction.

After some familiar business world banter at the office between Sam and Meg, the gist of the play is revealed as a prospective client arrives.

Eckart is an alluring Norwegian artist with a heavy accent, who has invented a fantastical facial cosmetic product with profound powers, “The formula helps you became yourself.” As the CEO of his company, he is seeking to employ an American advertising agency. He and Meg hit it off and she later applies the metaphorical compound. This instigates a journey of self-discovery. 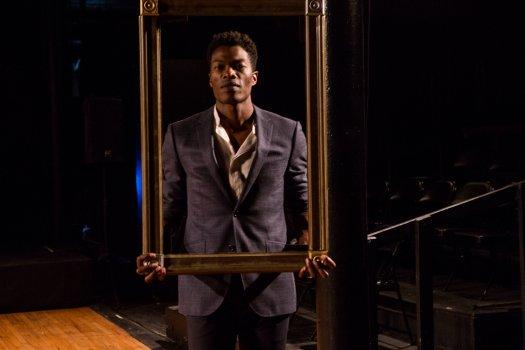 Meg’s mother Delia has emerged from a coma after an illness and is an intrusive presence as the two have had a contentious relationship. Delia unexplainably speaks with a Scottish accent, and near the end of the play we learn that she is in fact Welsh. This off-kilter tangent is symptomatic of the play’s vagueness, and that renders the redemptive finale pleasant but wan.

At first Horse plays like a revved up theatrical character study and then with the thread of “the formula” taking over it becomes a fable. It’s exciting to watch but baffling.

The theater’s large playing area is configured as a runway stage with the audience clustered on raised levels at various areas. Scenic and props designer Shannon White provides modern wooden furniture on wheels that fluidly get moved around during scene transitions. Ms. White’s creativity imparts a dreamy dimension for the actions to be perform in. 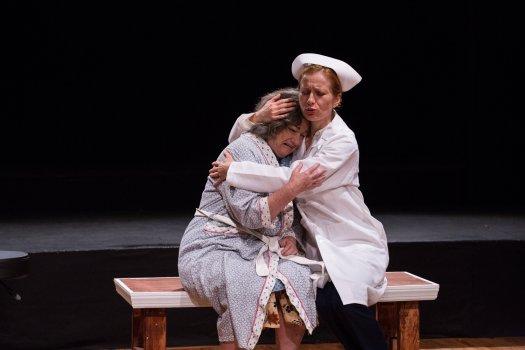 Interacting with the main characters are Tatyana Kot and Demetrius Blocker who bring charisma to their changing roles as they weave in and out of the narrative. They also gracefully perform much of Gus Solomons Jr.’s superb choreography. Mr. Solomons Jr.’s work is a glorious display of modern dance that adds intensity, energy and mystery.

In keeping with the hyperreality of the piece, the leading performances are also stylized with a uniformly emphatic vocal delivery.

Rachael Schefrin’s Meg is pleasingly frantic and frazzled and offers a rich characterization of an unraveling career woman. The charming Peter Collier as Sam is an engaging cross between straightforwardness and emotionalism. Linus Ignatius is delightfully whimsical as Eckart. Nancy Wolfe vividly pops in and out as the abrasive Delia.

Ms. Bentley has vibrantly coordinated all of the presentational elements into an intriguing 75-minute production with her commanding staging. The present, the past, and inner lives all converge through the flawless unison of movement, dance and stage effects.

There’s a fleeting reference as to the significance of the title, but like much of Horse it shimmers by without making much of an impact.