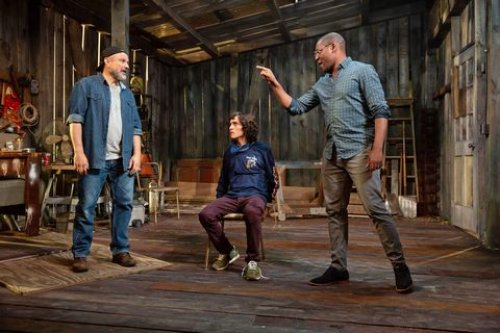 A present day hostage drama with psychological thriller flourishes, playwright Matt Williams’ underdeveloped Fear would benefit from more of Agatha Christie’s plotting and less of David Mamet’s sensibility. Its 70 minutes are lively due to the intense performances, but it doesn’t make much of an impact.

The salt-of-the-earth Phil is a plumber in his 50’s who has tied up a troubled 15-year-old boy named Jamie to a chair in a New Jersey toolshed. The two are neighbors and Phil is part of a search party trying to find the missing 8-year-old Melissa whom Phil believes Jamie has abducted. Jamie may have also burned another neighbor’s cat to death and set a fire in the local high school. Wandering into and appalled by this situation is the Princeton professor of comparative literature Ethan. He’s in his 40’s, has a shaky marriage, joined the search party, and has previously employed Phil to fix a toilet.

During the standoff, there are philosophical musings with Shakespearean quotations, class-conscious debates and a battle of wills. Red herrings abound, possibly implicating each of the trio in the disappearance and probable murder of the child. We learn that Phil’s daughter babysits for Melissa, that Ethan did not officially sign up for the search party, and that Jamie was seen holding one of her shoes near a lake. 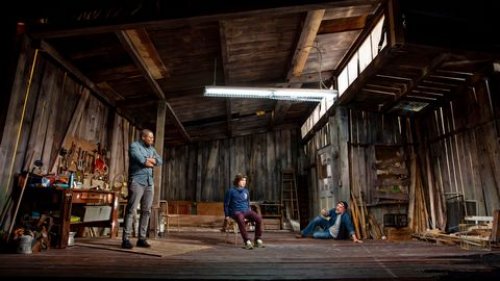 The Cosby Show, Home Improvement and Roseanne are among Mr. Williams’ prominent credits as a television writer and producer. Williams also has had several plays produced and has directed a number of theater productions. Fear is in the venerable tradition of The Petrified Forest and The Desperate Hours with dashes of The Bad Seed. It exhibits a technical facility for dramatic writing with its sharp dialogue delivered by its diverse well-drawn characters enmeshed in a suspenseful scenario out of French cinema. Lamentably, Williams doesn’t go all the way in rendering Fear’s classic whodunit aspects. It all plays out inconclusively and without satisfaction.

With his gruff cadences of the street, hulking presence and everyman persona, Enrico Colantoni makes a great impression as Phil. The jittery, beaming and animated Obi Abili wonderfully conveys Ethan’s pomposity and humanity. Though only 14-years-old, Alexander Garfin is a seasoned child performer and is convincing in the difficult role of Jamie.

Director Tea Alagić’s forceful staging with its numerous scuffles, furious movement and guidance of the vivid performances inject as much momentum as possible to the patchy material. Ms. Alagić’s efforts are aided by J. David Brimmer’s smashing fight direction. 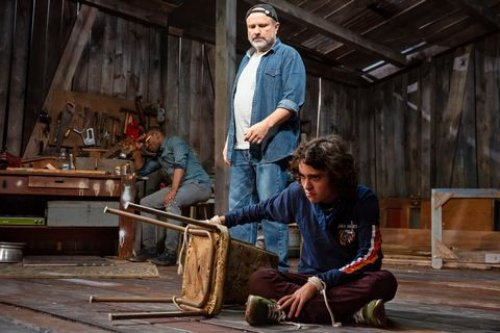 Fear has all of the presentational elements to be an intriguing crime drama but hasn’t been fleshed out enough to succeed.