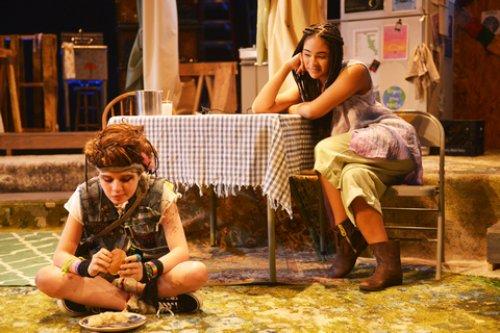 You might be wondering how a baby-sitter from Trenton finds herself in the woods, coming down from Amphetamines, about to be framed for murder. Because that’s what I’ve wondered almost every night since.

So says our 22-year-old heroine and narrator Robin during the play’s noirish opening bit at a crime scene followed by flashbacks. Leaving behind a troubled life and enticed by this heralded paradise, she hitchhikes her way to Eco Village. It turns out to be an insolvent farm commune founded by the imperious Ursula. She is a feisty lesbian who became well-to-do as a result of her past remunerative career as a high-powered dominatrix dominating Wall Streeters. Also in residence is her kooky female lover of seven years Sammi, the melancholy artist Jean-Lerois, and the smoldering ex-convict Jake who was physically abused by his father and sexually molested by his stepmother and now smokes pot and drinks a lot. 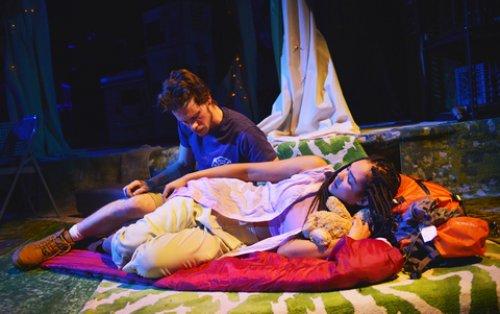 After signing the Community Agreement containing various rules of conduct, Robin is taken in. Amidst mundane tasks of farm work, sparks fly as Robin and Jake become emotionally entangled. Booze-swilling teenaged drifter Casey shows up, gets accepted but is later thrown out because she’s a thief. Further discord arises as the relationships become even more complicated, culminating in violence followed by a reflective coda. It’s all ludicrous and unintentionally funny.

Such thinly written characters in clichéd situations are a challenge for the actors who all go full throttle with their forceful characterizations. Recent college graduate  Arianna Williams is wide-eyed and appealing as Robin. The scruffy, athletic and personable Gregory Isaac Stone’s pleasing vocal twang enhances his portrayal of Jake. Michael Oloyede’s quiet intensity and rueful delivery do wonders for the role of Jean-Lerois.  Pearl Rhein gleefully swaggers her way through the part of Ursula, has nice emotional outbursts and cracks a mean whip. As the volatile Sammi, pert Lily Davis ranges from sweetly daffy to explosively powering. Sixteen-year-old  Zoe Wilson plays the teenage Casey with prickly realism.

There’s not much in the way of plot other than behavioral incidents and Ms. Nir fleshes out her characters with a bare minimum of biographical details. That would be enough for a horror movie where stock characters get killed off one by one but for a play with aspirations of significance it isn’t.  Eco Village strains to sustain its 80 minute length. 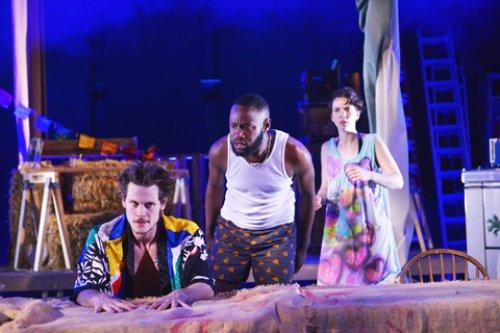 Before the show begins, the audience views scenic designer Meredith Ries stunning creation. A spacious bucolic vision is simulated on the multi-level set with steps, ramps and ladders representing rooms of the house and areas of the grounds. Hanging twirled curtains of green and gold, forestial rugs dot the floors, one section of which pops open to reveal earth for planting. The residence is filled with wooden furniture and bales of straw are strewn around.

Other than serving as a showcase for its emerging cast,  Eco Village doesn’t make much of an impact.