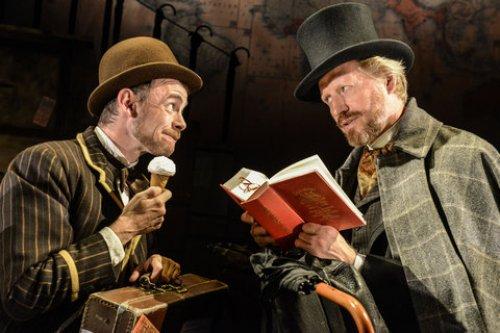 Michael Hugo as Passepartout and Andrew Pollard as Phileas Fogg in a scene from New Vic Theatre Staffordshire’s production of “Around the World in 80 Days” (Photo credit: Robert Day)

Laughter and oohs and ahs abound from an audience of all ages during this exuberant and wildly theatrical stage adaptation of Jules Verne’s classic adventure novel Around the World in 80 Days. A gray cloth transforming into an elephant, model ships held aloft and actors wearing headdresses portraying a herd of buffalo are among the dazzling low-tech pieces of stagecraft on display.

At London’s Reform Club in 1872, an argument breaks out about the possibilities of world travel. Several of the gentlemen accept the mysteriously wealthy eccentric Phileas Fogg’s wager of £20,000 that he can travel across the globe in 80 days. Fogg and his equally offbeat French valet Passepartout who has been employed for a few hours instantly set off on this madcap trek. Scotland Yard’s officious Inspector Fix believes Fogg is the culprit behind the recent £55,000 robbery of the Bank of England and is in pursuit. In India,  Fogg and Passepartout rescue the young princess Aouda who is to be burned to death on her deceased husband’s funeral pyre. She becomes a romantic interest during the remainder of the eventful journey where the suspense if Fogg will make it back to London in time to win the bet plays out. 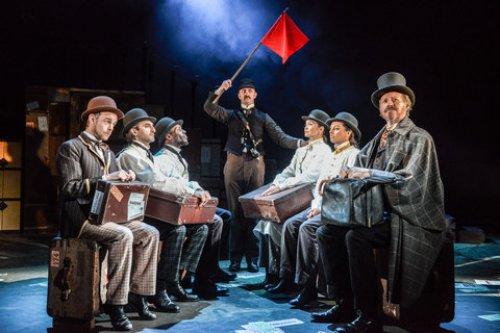 Michael Hugo, Andrew Pollard and the company of New Vic Theatre Staffordshire’s production of “Around the World in 80 Days” (Photo credit: Robert Day)

Playwright Laura Eason’s inspired treatment is witty, smart and playfully reimagines this episodic saga for the stage.  A parent and child are called up to assist with swaying chairs to simulate an ocean voyage. Someone plays a ukulele as he chats and sings to the audience. Actors roam through the theater at times.

Beverley Norris-Edmunds’ movement direction consists of limber hijinks, neat dance moves and bits that are out of Monty Python’s Flying Circus’ “The Ministry of Silly Walks.” A morning ritual of Fogg standing up, made to look as if he’s in a bed, servants dressing him, him holding a teacup and marching down the stairs is a hilarious highlight. 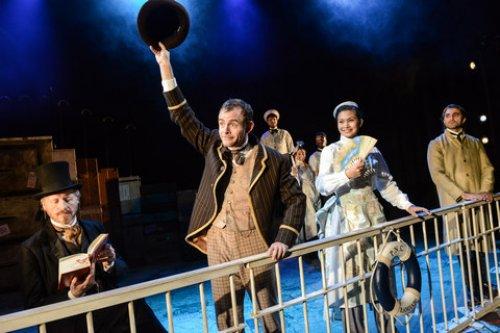 Andrew Pollard as Philieas Fogg, Michael Hugo as Passepartout and Kirsten Foster as Princess Aouda and company in a scene from New Vic Theatre Staffordshire’s production of “Around the World in 80 Days” (Photo credit: Robert Day)

Bearded Andrew Pollard is a smashing Phileas Fogg with his smooth and resonant vocal delivery that erupts with urgency. Mr. Pollard’s dynamic characterization is an utterly charming cross between Sherlock Holmes and Henry Higgins.  Employing a strong French accent and exhibiting athleticism, the magnetic Michael Hugo’s offers a sensational portrayal of Passepartout. Mr. Hugo and Pollard are a great team as their characters’ relationship deepens over the course of their mission.

The alluring Kirsten Foster is humorous, feisty and quite touching as Aouda. In the grand tradition of British stage acting is Dennis Herdman’s gleefully unrestrained performance as the villainous Inspector Fix.

Matthew Ganley, Pushpinder Chani, Nyron Levy and Joey Parsad comprise the rest of the amazing company. All ferociously play an enormous variety of international roles through quick costume changes and thrilling physical and vocal transformations that distinctly individualizes each one. 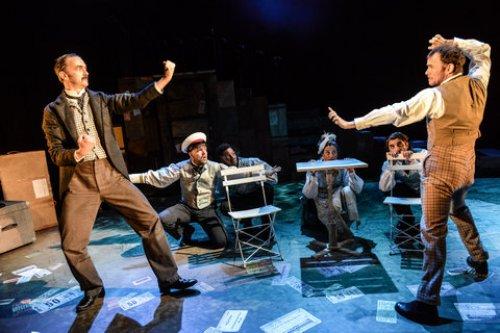 The company of New Vic Theatre Staffordshire’s production of “Around the World in 80 Days” (Photo credit: Robert Day)

A platform and staircase composed of vintage suitcases, steamer trunks and adorned with umbrellas and bowler hats is the prime component of Lis Evans’ fabulous scenic design. With the aid of numerous props, we’re cleverly transported across the continents. The theater’s back wall is covered in a faded map of the world circa 1872. Ms. Evans’ marvelous costume design vividly ranges from traditional Victoriana to native outfits, circus getups and America’s Wild West.

Composer James Atherton’s jaunty score is a perfect accompaniment to the merriment as it shifts from rousing to slyly channeling the locations with familiar exotic melodies. It and a multitude of effects are adeptly rendered by sound designer James Earls-Davis. Lighting designer Alexandra Stafford’s crystalline efforts beautifully enhances the production.

Published in 1873, Around the World in 80 Days is one of Verne’s most popular works and the 1956 all-star film version won the Academy Award for Best Picture. This captivating incarnation demonstrates its enduring appeal.

The production debuted at England’s New Vic Theatre Staffordshire in 2013 and toured throughout the United Kingdom. This New York City premiere is performed at The New Victory Theater which is a performing arts institution devoted to children and family entertainment.