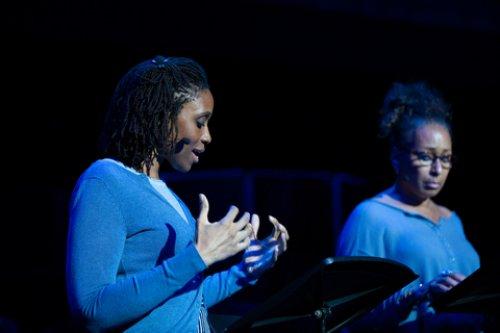 Chinasa Obguagu and Tamara Tunie in one of five rotating casts in Theater of War’s “Antigone in Ferguson” at Harlem Stage (Photo credit: Gregg Richards)

The 2014 police shooting of Michael Brown inspired this exuberant concert-style presentation of Sophocles’ classic Greek tragedy entitled Antigone in Ferguson. Director Bryan Doerries’ faithful adaptation lasts an hour and is performed by a rotating name cast in connection with a lively choir. Mr. Doerries’ proficient staging transforms it all into a novel, entertaining and emotionally charged experience. Tickets are free by making a reservation.

In ancient Thebes, we meet the headstrong daughter of Oedipus and Jocasta, Antigone. She disobeys King Creon’s order that her mutinous brother Polynices who was slain in battle not be buried or mourned. Creon then has her and her older sister Ismene imprisoned. His son Haemon is in love with Antigone which complicates matters. Creon’s wife Eurydice and the blind seer Tiresias prominently figure in the plot with its characteristic suicides, clashes and despair. Guards, messengers and citizens are also on the scene. 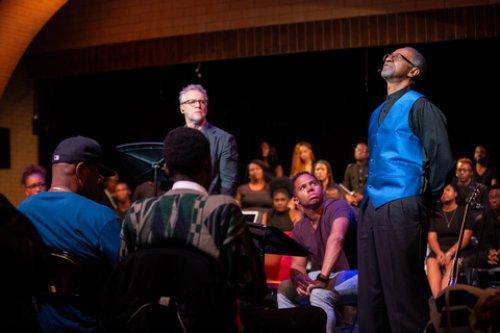 The cast changes weekly during the production’s five-week run and the following group appeared in its second week. Bearded, wearing a red Panama hat and with his booming voice, the charismatic Frankie Faison is a commanding Creon. Adepero Oduye’s Antigone is a captivating portrait of girlish iron will. Playing both Ismene and Eurydice with equally impressive results is the excellent Chinasa Obguagu. The soft-spoken yet animated Ato Blankson-Wood is quite passionate as Haemon. Besides being the band’s guitarist, Willie Woodmore  is a thunderous Tiresias.

There’s a wonderful pre-show where the audience gets a taste of what’s to follow. Under the euphoric musical direction of Phil Woodmore, the Antigone in Ferguson choir whose diverse members include “police officers, activists, youth, teachers, and concerned citizens from Ferguson, Missouri and New York City…” joyously performs for 15 minutes. Joining them are weekly guest choirs and the Bethel Gospel Assembly was at the performance under review. 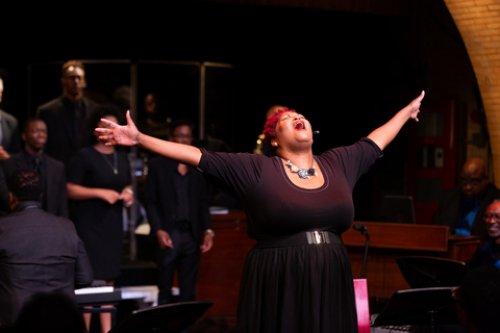 The format is of the cast at music stands with scripts expressively reading in the contained downstage playing area. Interspersed are six original songs that Phil Woodmore wrote the music for with various lyricists. These neat compositions range from jazz, marches and traditional gospel and relate to the play’s actions and are sensationally executed by the dynamic band. Choir members also vividly appear as townspeople and address the cast and audience from time to time. 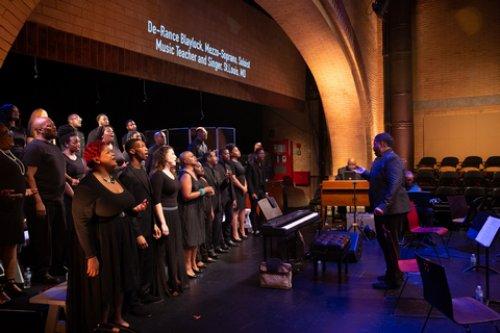 Choir members in one of five rotating casts in Theater of War’s “Antigone in Ferguson” at Harlem Stage (Photo credit: Gregg Richards)

Of great benefit is the performance space Harlem Stage Gate House that is on the campus of the City College of New York. The stage is framed by a curved arch of weathered bricks that add a classical and atmospheric dimension. Above the stage are projected images of choir members before the show, and the titles and lyrics of the songs during the performance.

Antigone in Ferguson is a co-production of the performing arts center Harlem Stage “that celebrates and perpetuates the unique and diverse artistic legacy of Harlem and the indelible impression it has made on American culture” and Theater of War Productions. That company “presents community-specific, theater-based projects that address pressing public health and social issues.” 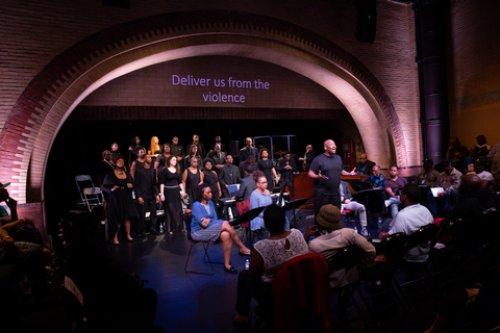 Immediately following the conclusion of the play, Theater of War Productions’ artistic director Doerries appeared at the performance under review and moderated a structured discussion sequence which follows each show. Four preselected people go on stage to give their views on the show. Then a facilitator with a microphone asks four questions regarding the presentation and goes through the audience for their responses. This lasts for about an hour and a quarter to an hour and an half and the band and choir then perform a musical finale.

This town hall section revealed some poignant and eloquent insights into topical issues in the contemporary U.S. such as race relations, economics and politics. The facilitator at this performance was Dominic J. Dupont who previously related his life story. Born in Brooklyn, at the age of 19 he was convicted of murder and given a prison sentence of 25 years to life. On January 22, 2018, he was released after serving 20 years, 7 months, and 18 days in the New York State Prison system due to Governor Andrew Cuomo’s granting him executive clemency based on his “leadership and positive impact with the prison system.”  The cheerful, upbeat and youthful Mr. Dupont’s presence added even more emotional resonance to this portion.

Running time: two hours and 30-45 minutes with no intermission