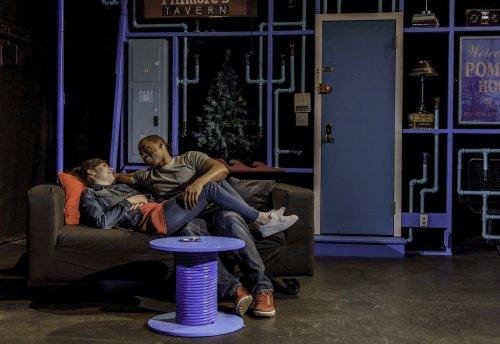 For years, as I waited for my express bus to Riverdale, I noticed other buses headed towards Electchester.  Electchester?  What is that?

All my questions—and more—were answered in Alternating Currents, a play by Adam Kraar, directed by Kareem Fahmy at the Urban Stages, and which will travel to five venues in the Working Theater’s Five Borough/One City Initiative.

Two young unmarrieds, Elena (Liba Vaynberg) and Luke (Jason Bowen), a mixed-race couple, decide to take advantage of their membership in the Electricians Union to buy into the supposed utopia of Eastchester in Fresh Meadows, Queens.

The idea of International Brotherhood of Electrical Workers’ union president, Harry Van Arsdale, Jr.—who is venerated as godlike on the Electchester campus—these “towers in a park” provide decent housing and a community feel for its inhabitants.  The problem is that this fine idea of a community, first built in 1949, has degenerated over the decades into feuding factions that make the new tenants, Elena and Luke, ill at ease, eventually taking its toll on the couple. 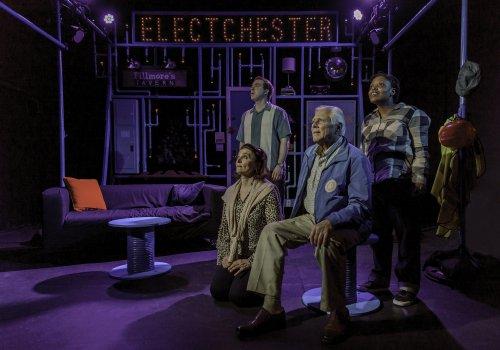 Alternating Currents is moderated by Jerry (a likeable Brian Sgambati) who acts like a Greek Chorus, commenting on the ups and downs the couple experience which include fighting for a parking spot, being forced to volunteer for different activities and facing racial discrimination.  Jerry also brings several characters forward to tell us about the importance of electricians and their skilled work.

Across the street from Electchester is a low-income project called Pomonok which the Electchester residents eye with fear and scorn.  Luke has an aunt living there and he begins to spend time with his cousin Sean (Rheaume Crenshaw who skillfully plays several other characters, including a forceful co-worker, Sharonda) which makes Elena feel left out.

Three other actors, Mr. Sgambati, Robert Arcaro and Antoinette LaVecchia manage to inhabit multiple characters from elderly folk who keep a nostalgic attachment to the past and community go-getters.  There’s Elena’s father (who is against her becoming an electrician), Sherry (“We take care of each other.”), Sal (“Hey, brother, how’re you doing?”), Shira (“All your friends are there.”), and even Harry Van Arsdale, Jr., himself (“Our Union’s come a long way since the days of lockouts and brawling in the union hall.”).  The speed of these whiplash changes from character to character is amazing. 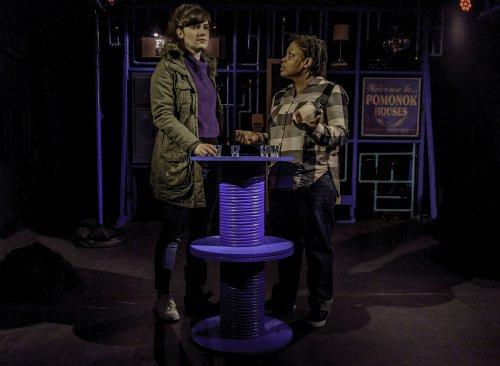 The smart set by David Esler, basically a framework of a room defined by pipes, turns out to contain shelves and drawers that become beds, tables, chairs, etc., defining different spaces with economy.  Dina El-Aziz’s costumes help define the miniscule differences between the hierarchy of Eastchester and Scott Bolman’s lighting makes the most of the intricacies of the set.

Despite the complexity of the interactions of the people of Electchester and the poor folk at Pomonok, Kraar manages to end on a promising note.  Alternating Currents, produced under the auspices of the Working Theater, is a diverting look what happens to an idyllic place after decades of reality intrude.

Running time:  85 minutes without an intermission