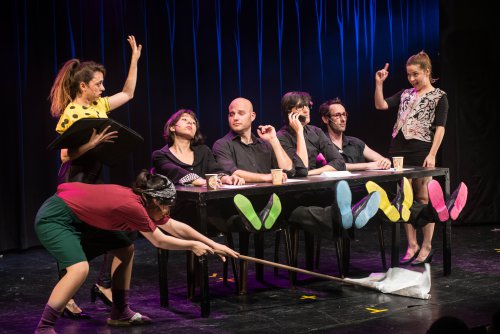 A scene from “Odd Birdz” at the Players Theater (Photo credit: Lior Rotstein)

“We’re Israelis.  If you don’t like us you can shoot us. Like everyone else does.” is about the only serious statement expressed during the ninety minutes of often hilarious comedy in the sketch show Odd Birdz.

That line is spoken by an overbearing Israeli woman (played by a man in drag) who is bickering with her low-key husband. They are in the audience of The Players Theatre adding to the comical effect.  Appearing twice in the show, their cranky exchanges inject a contemporary and realistic streak in what has been a procession of otherwise very humorous and at times satirical fantasy sequences.

The fast paced program of 20 sketches are often realistic situations that are given an outrageously absurdist treatment.  This is achieved through sight gags, dance, athletic stylized movements, bold lighting and sound effects, flamboyant costumes, puppets, and highly accomplished demonstrations of verbal and physical comedy.

After wheeling his suitcase at the airport, a stuffy traveler’s confrontation with two fey Israeli customs officials evolves into a spectacular production number with cheerleaders twirling boas. 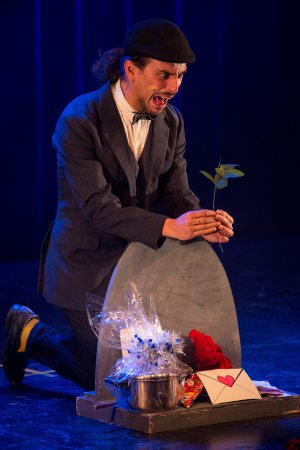 A scene from “Odd Birdz” at the Players Theater(Photo credit: Lior Rotstein)

These are some of the other memorable highlights. A job interview for security guards reaches the heights of ridiculousness.  A couple on a date speaks their innermost thoughts, as does their waiter.  There are skillful parodies of American Idol and television talk shows.  A lip-synching sequence to well-known rock and pop songs becomes a mesmerizing tour de force. Mourners duel at a grave sight.  A man and a woman’s many silent actions while watching a movie in a theater are displayed.

The show is performed by the troupe Tziporela that was formed by nine members of an acting studio in Israel twelve years ago.  They have appeared around the world to great acclaim and are now making this return New York City engagement following their appearance here last fall.

Conveying the joyous spirit and monumental artistry of Eugene Ionesco, Nichols and May, as well as Monty Python, the clever comedy of Odd Birdz is universal, richly realized, and grandly entertaining.