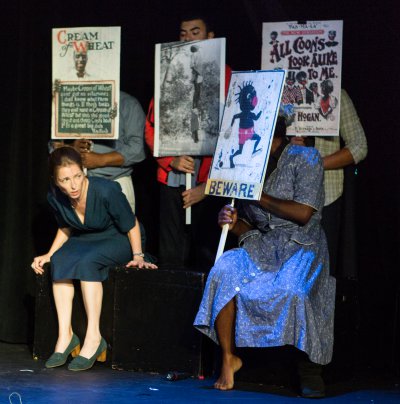 Eevin Hartsough and cast in a scene from “NIGHT OF THE LIVING N-WORD!!” (Photo credit: Isaiah Tanenbaum)

THAT word gets said frequently in playwright Kevin R. Free’s very funny, dark and complex contemporary satire on political correctness, NIGHT OF THE LIVING N-WORD!!  What could have been merely a comedic sketch has instead been developed into a full-fledged antic play.

Laden with jokes, sight gags and flamboyant characters, Mr. Free’s well-constructed and startling work combines the outrageous sensibilities of John Waters’ films with the social consciousness of Norman Lear’s television sitcoms.  Free’s giddily convoluted scenario is dense with flashbacks, fantasies and surprises.  Just when a thread is exhausted he is seamlessly on to another.  The classic horror film Night of the Living Dead is emulated for the deadly serious dénouement.

The Caucasian Barbara was disowned by her racist Southern parents after she marred the African-American actor Ben.  He starred as a policeman in a television crime drama.  Barbara became obsessed with the prohibiting use of the N word. At her urging, Ben quit the series due to its reliance on it.  Since then, he has hasn’t acted much and he became a househusband raising their closeted gay son Channing.

Channing is about to turn 17, and to celebrate, Barbara has planned a family gathering at the Georgia plantation Hartley House on Tibia Island where she grew up.  She inherited it after the rapidly successive deaths of her estranged parents and because of their lax estate planning.  Joining them is Ben’s deacon father Clayton.

The gutsy and highly talented cast forcefully embraces the often off-color material with their vivid characterizations.  They all repeatedly articulate that controversial epithet with simple directness for comic and stark effect.

The very fine actress Eevin Hartsough plays Barbara with great poise, dignity and bearing and that all makes her lively portrayal even funnier. 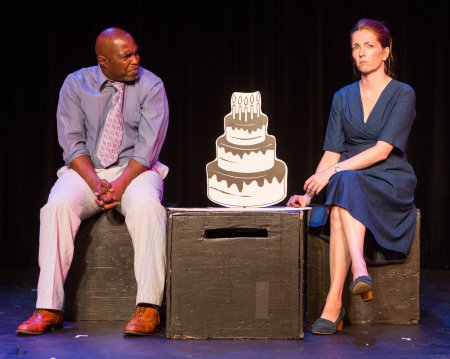 Stanley Wayne Mathis and Eevin Hartsough in in a scene from “NIGHT OF THE LIVING N-WORD!!” (Photo credit: Isaiah Tanenbaum)

Besides being a talented writer Mr. Free also winningly performs the role of Ben.  Free is personable and low-key but animated and despite the prevalent silliness, he achieves reality in his performance.

As Channing, Aaron Parker Fouhey with his hulking physicality and whiney tone offers a humorously heightened portrait of confused adolescence.

The charismatic Stanley Wayne Mathis is a marvelously feisty Clayton and seems like a real preacher when he erupts as the character.

“Aunt Jinny” is a white-haired cantankerous African-American servant and T. Thompson’s superbly detailed depiction of her, especially while rowing a boat, is hysterical.

Very skillfully playing a variety of smaller multi-racial roles is Romeo Lacandola who makes a strong impression in each due to his sunny presence.

Hilarious various sized, painted cardboard cutouts are the hallmarks of Joshua Coakley’s clever properties design. These include a rowboat, a TV screen, a birthday cake, and a small representation of the plantation that a character holds up.   In addition to these, there are black wooden blocks and a few basic objects that are part of the simple but tremendous stagecraft on display.

Before the show begins there is a delirious haunted house-style aural montage. Creaking doors, screeching cats, howling wolves, eerie humming by children and spooky music are repeated.  Carl Riehl’s accomplished sound design is equally as atmospheric throughout the presentation.

NIGHT OF THE LIVING N-WORD!! is a provocative marvel of theatricality and social commentary.