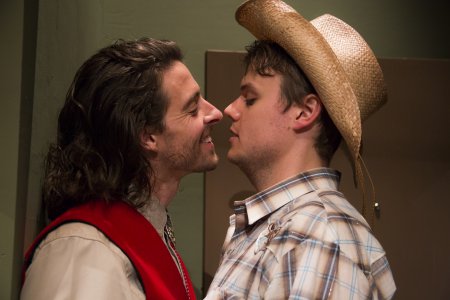 I’m a fuckin’ drunk, what do you expect?

Billed as, “An Unfiltered Comedy,” New Country, is not only very funny, but it is also quite dramatic and vastly entertaining.  Author Mark Roberts’ script is model of high caliber theatrical construction that could be analyzed as a perfect example of the form in dramatic writing classes.  Exposition, plot, and characters are precisely and vividly rendered.

The play is set in a Nashville hotel suite on the eve of country western star Justin Spears’ wedding.  It features this charming but steely, egomaniacal tyrant, his two handlers, his wacky hick uncle, and his long abandoned ex-girlfriend who was instrumental in his success.  A young, gay, bellboy who is a devoted fan and an aspiring singer-songwriter also appears and is crucial to the plot.

In addition to his superior writing achievement, Mr. Roberts also plays the complex old codger, Uncle Jim.  He has written a grand vehicle for himself, and his performance is as tremendous as his writing.  Blusteringly entering, carrying a garish blow-up sex doll, and resembling a grizzled Duck Dynasty figure with a big scraggly beard, wearing a cap, camouflage gear and orange sneakers, he instantly gets laughs.  With a unique, guttural, singsong twang, he delivers numerous zingers, but soon the pathos and depth of this disaffected character is poignantly revealed.

His outrageous wardrobe is the artful handiwork of Nia Hunter.  This getup, along with costume designer Heather Baumbach’s detailed creations, that include worn jeans, cowboy hats, khaki slacks and a polo shirt hotel uniform, add a greatly authentic dimension.  It looks like all really are country and western types.

Director David Harwell has his finely selected cast act with rapid-fire delivery and give high-energy performances that not only serves, but also elevates the material into a richly realized work of theater. 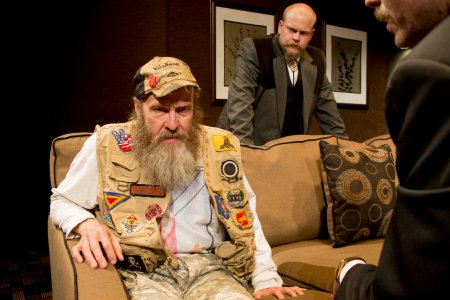 Malcolm Madera winningly plays Paul, Spears’ good ole boy manager who discovered him. Slickly charismatic, he veers from folksy to brutal, with calibrated ease.  As his hapless subordinate, Jared Culverhouse offers a hilarious portrait of a seething second banana. With their appealing chemistry together, an argument about Chuck’s pairing with an obese bridesmaid, plays like scene out of David Mamet.

Justin Spears is the fulcrum of the play, upon which everything revolves, and David Lind sensationally portrays him.  He magnetically conveys the star quality of the character as well as the tortured psyche behind the assured façade.  With his sensual presence, physical fluidity, and wavering vocal patterns, it seems like he could actually be a country singer.

Leather jacketed Sarah Lemp is fierce, endearing, and touching as Spears’ scorned and long abandoned girlfriend who nurtured him before his ascent.  Ms. Lemp dynamically barges into the action with the force of a Sam Shepard heroine.

With a dazzling smile, the pony-tailed and boyish Stephen Sheffer marvelously plays the intrusive bellboy, Ollie.   The personable and talented Mr. Sheffer weaves the qualities of youthful enthusiasm, cunning cleverness, and sexual openness into a pivotal characterization.

The familiar, dark underside of show business is given a vital and fresh take in New Country, with all of it’s superb elements.