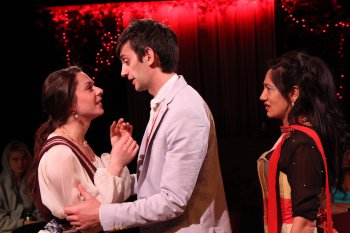 “Show this to the Prince.  He will seat you,” says the box office agent to those picking up their tickets at HERE for Idiot. Indeed, when entering the theater one is greeted by a tall, lean, animated young man in aristocratic attire.

The Prince exchanges pleasantries and then instructs an usher as to where to seat audience members.  Either in rows of cushioned theater seats in the back or on metal folding chairs that the usher brings out and places where the Prince has stated.

The theater has been configured into a modern nightclub with the audience spread out on all four sides.  There is a DJ playing Russian tunes and later electronic music.  A karaoke stage with a microphone, a photo booth behind white strip curtains and a bar are in different areas along the back walls.  The floor is decorated with Persian carpets and small runway lights.  There is a playing area in the center as well, and above this near the ceiling are four rectangular television monitor screens.  These will later project surrealistic images, the audience, the actors inside the photo both, the actors performing karaoke, and the cast in different locations.

Playfully hi-tech and well performed, the show is overall enjoyable and interesting but the perpetual sensory bombardment at times overwhelms the experience of following the plot and characters.  It begins with screeching traffic sounds.

Fyodor Dostoyevsky’s sprawling 600-page novel The Idiot (1869) deals with the good and naïve young Prince Lev Myshkin clashing with the baser aspects of life.  He is an epileptic who has returned to Russia after four years at a Swiss clinic.  He becomes friends with Parfyon Rogozhin, a wealthy young merchant who is tempestuously involved with the fiery Nastassya Filippovna.  The Prince in the course of his travels becomes smitten with the sedate Aglaya Epanchin.  This mini-summary of the novel is the narrative spine of this 75-minute show that depicts the passionate and violent relationships of those four characters. 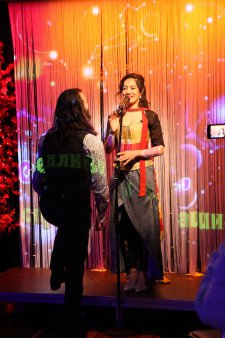 Director and choreographer Kristin Marting masterfully coordinates everything into a spectacle with sensational movement and dance. Robert Lyons who is credited with “Text by” has done a skillful, flavorful and faithful distillation.  Ms. Marting and Mr. Lyons jointly conceived and adapted this production. It’s initially stimulating but the incessant franticness of their vision becomes distracting.

For some reason, people think of me as an idiot.

At one time I was so ill that I must have seemed like an idiot,

but what kind of idiot can I be now if I am aware that people consider me an idiot?

In dark gray trousers, a dark gray vest, a white shirt with a white string tie, light gray jacket and silver shoes, the quirkily handsome and charming Daniel Kublick is marvelous as Prince Myshkin.  Mr. Kublick fully embraces the character’s goofiness and melancholy and his seizures are quite stunning.  He winningly holds attention as the show’s centerpiece.

Purva Bedi as Nastassia perfectly captures this showy character’s volatility with her alluring forcefulness and appealing sensuality.  As Aglaya, Lauren Cipoletti is wonderfully direct and her attractive girlishness enhances this more down to earth woman.  Bearded, long-haired and physically powerful, Merlin Whitehawk in a fur-collared jacket, realistically resembles a 19-century Russian and his intense performance strongly conveys Rogozhin’s temperamental moods.

The camaraderie and convivial chemistry between these four actors is engaging and prevents the show from becoming a hollow performance art exercise.  They all movingly deliver long emotional speeches at times as well as interacting with each other. 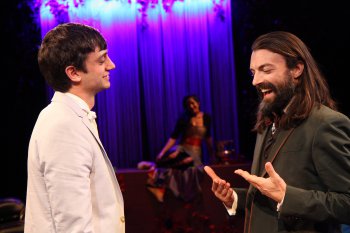 Besides her archetypically inspired ensembles for the men, Kate Fry’s opulent costume design includes for the women authentic-looking Russian dresses and accessories with witty contemporary twists.

Nick Benacerraf’s dazzling environmental design is an immersive and accurate recreation of a present day nightclub.  Jeanette Oi-Suk Yew’s lighting design is an often-thrilling display of that craft that vibrantly highlights the events with it striking and fluctuating tones.

The spirit of Dostoyevsky does come through in Idiot despite all of the technological tangents.