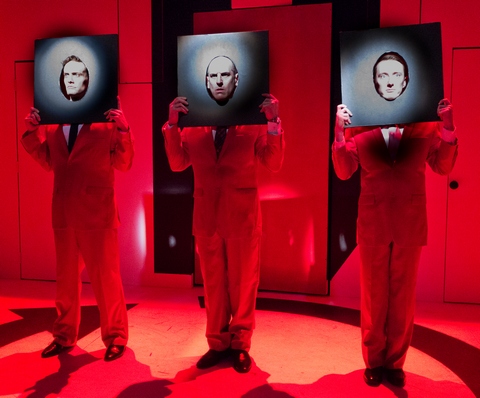 Danny Gardner, Joel Jeske and Brent McBeth in a scene from “Everybody Gets Cake!” (Photo credit: Jim R Moore/Vaudevisuals)

Albert Einstein, a cow, Mother Theresa, a man in drag lip-synching to Edith Piaf, a W.W. I flying ace, and a slasher in a bloody hockey mask, all make cameo appearances in the hyperbolic, surrealistic sketch comedy performance fantasia, Everybody Gets Cake!

It’s presented by the troupe Parallel Exit whose goal is to exhilarate the audience “through simple theatrical storytelling rooted in a imaginative, magical and joyful physical stagecraft.”  They succeed at that in this show.

Theatergoers familiar with Richard Foreman’s work with the Ontological Theater will be especially receptive to this frenetic production. There are also traces of Monty Python.  Those open to a experiencing a collection of an hour of seemingly plotless, frantic, very well performed vignettes, might find it an entertainingly provocative time.  It’s a barrage of colorful imagery composed of heightened sights and sounds.  The loud tone of a ringing telephone is prominently featured.

The stage and walls are painted white with black arrows with occasional splashes of red.  A mirrored disco ball hangs from the ceiling and projects shimmering light.  Two tourists in yellow raincoats carrying shopping bags mill a round.  A dark suited secret service man in sunglasses stands guard over a large sheet cake on a platform behind a red velvet rope.

Eventually an old man hobbling around a nursing home appears. A doctor in a long white coat soon joins him.  Satie’s familiar elegiac Gymnopédie is heard.  Near the end, a man in a cow costume presents the old man with a birthday card and his birthday cake. 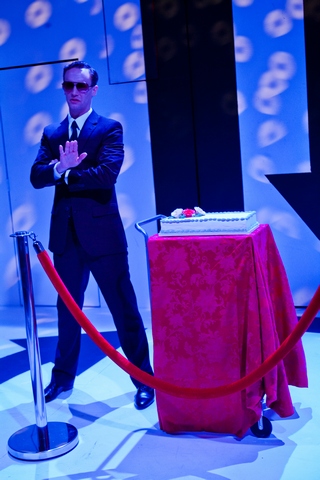 Danny Gardner in a scene from “Everybody Gets Cake!” (Photo credit: Jim R Moore/Vaudevisuals)

Does it all mean something? The audience individually decides for themselves if there’s sub textual significance to what’s happening and whether it’s all as funny as intended.

Danny Gardner, Joel Jeske, and Brent McBeth are the gifted trio who created and perform the show.  With their distinctive faces and great physicality, they all portray the large collection of figures with excellent clowning and comedy skills.  Their quick costume and character changes are at times breathtaking.  Mr. Gardner appears through January 23rd, and will be succeeded by Ryan Kasprzak for the rest of the show’s run.

Composer Ben Model wrote the clever original score that’s an amalgam of ragtime, classical, and Bernard Herrmann. He performs on a keyboard off to the side of the stage and also occasionally appears in the show for added comic effect.  Deadpan and dry, he is a very effective low-key foil to the kinetic trio.  At some performances Wayne Barker will take on this role and be the keyboardist.

Director Mark Lonergan has staged everything with aesthetic precision.  Each moment is a finely composed stage picture.  He brilliantly realizes the collaborators’ vision with many inventively linked arresting images. These yield to a comically fast-spaced, hallucinatory visual procession with strong characterizations.

Oana Botez has artfully designed the multitude of vibrant costumes.  The set and lighting design of Maruti Evans is dazzling.  Their work is quite stunning during a sequence infused with red.  Sound designer Mike Dobson’s technical mastery adds considerably to the experience.

Early on in the show, one of the performers dressed as a member of the theater staff, makes wry announcements, one of which is that this is for family audiences.  Indeed, children would be most likely entranced by the live cartoon quality of the piece.  Adults could be also.

At the conclusion of Everybody Get Cake! the departing audience gets a small Hostess Yodel with the show’s logo on the wrapping.

Running time; 75 minutes with no intermission